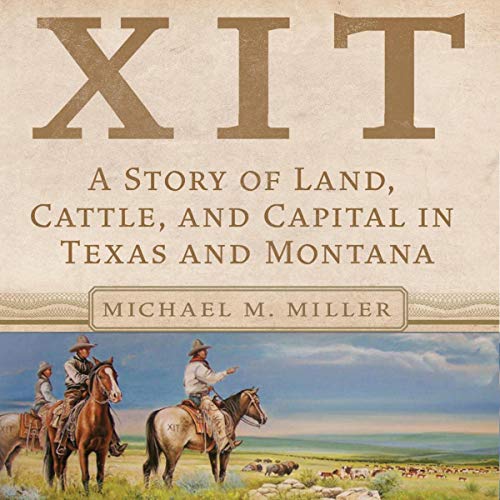 XIT: A Story of Land, Cattle, and Capital in Texas and Montana

The Texas state constitution of 1876 set aside 3,000,000 acres of public land in the Texas Panhandle in exchange for construction of the state’s monumental red-granite capitol in Austin. That land became the XIT Ranch, briefly one of the most productive cattle operations in the West. The story behind the legendary XIT Ranch, told in full in this book, is a tale of Gilded Age business and politics at the very foundation of the American cattle industry.

The capitol construction project, along with the acres that would become XIT, went to an Illinois syndicate led by men influential in politics and business. Unable to sell the land, the Illinois group, backed by British capital, turned to cattle ranching to satisfy investors. In tracing their efforts, which expanded to include a satellite ranch in Montana, historian Michael M. Miller demythologizes the cattle business that flourished in the late 19th-century American West, paralleling the United States’ first industrial revolution.

The XIT Ranch came into being and succeeded, Miller shows, only because of the work of accountants, lawyers, and managers, overseen by officers and a board of seasoned international capitalists. In turn, the ranch created wealth for some and promoted the expansion of railroads, new towns, farms, and jobs. Though it existed only from 1885 to 1912, from Texas to Montana the operation left a deep imprint on community culture and historical memory.

Describing the Texas capitol project in its full scope and gritty detail, XIT cuts through the popular portrayal of great western ranches to reveal a more nuanced and far-reaching reality in the business and politics of the beef industry at the close of America’s Gilded Age.

What listeners say about XIT: A Story of Land, Cattle, and Capital in Texas and Montana