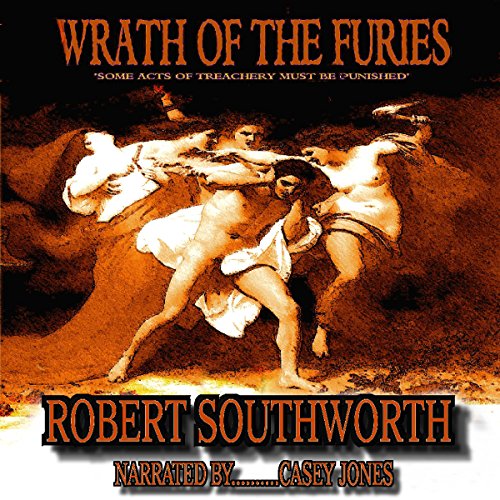 Wrath of the Furies

By: Robert Southworth
Narrated by: CaseyJonesCaseyJones
Try for £0.00

The new magistrate of Justitia has a difficult task before him. Rome is a bed of deceit and murder and with the Emperor travelling the empire, it falls to him to keep order. However, with a highly skilled assassin slaughtering members of Rome's elite and a mysterious organisation plotting to take power in the Emperor's absence, the magistrate will face constant danger. Magistrate Lucius Magro Decius must learn the ways of Rome with all haste or find himself bleeding in the dirt.

What listeners say about Wrath of the Furies

What made the experience of listening to Wrath of the Furies the most enjoyable?

Having read the brilliant Wraith of the furies as a physical book, I decided that I wanted to revisit the incredible story that Robert had written, seeing as he had only just released wraith of the furies in audible form and always want to try this form of books, it was a fantastic opportunity, and I really pleased with the outcome, the narrator only adds to the experience and he pulls your threw easily, you've lelt hanging on to every word, close your eyes and the words transform into the epic movie in your mind, and wraith of the furies deserves to be on the big screen

The opening is just epic, easily to revival the opening of the film gladiator, Robert is brilliant at descriptive writing, and and you really feel as your on that hill looking down on the roman soldiers as the enemy sneak up on them, and the assassin you'd want to be him he is just so cool he needs his own video game,

His voice was great and kept your concentration, hung of every word, l always listen while in bed with my eyes closed, and he easily put Roberts words in visions,

Yes, when put that would be spoiling the moment, but the assassin was involved,

Robert Southworth is an amazing author and I have read every one of his books to date, his spartacus books are brilliant, but where as they are based on a real historical person there is a limit to what can be done before it becomes to unbelievable,
Wraith of the furies Robert is able to take of the shackles of the thracian slave and really excel and he does, and for me it seems Robert really loved writing this book too, as it's comes across in the pages, it's just phenomenal, really exciting, the characters, the fights, the on the edge of the seat moments all come across brilliantly, and I can't wait the the next book he writes,

Would you consider the audio edition of Wrath of the Furies to be better than the print version?

I havent read the print version preferring the audiobooks on the way to work. Nonetheless its an engrossing listen

The relationship between the two main characters and how it develops through the novel as each are faced with hardship.

Have you listened to any of Casey Jones’s other performances? How does this one compare?

No, but would love to hear more.

There is but dont want to play spoiler

An enjoyable read which keeps you guessing.

Would you listen to Wrath of the Furies again? Why?

Yes....I love the way the author weaves the story

Have you listened to any of Casey Jones’s other performances? How does this one compare?

First one but have to say it was excellent

There are a number of areas that take you on an emotional roller coaster.

It wasnt at all what i thought it would be. Nonetheless i cant complain one jot. Fantastic

What other book might you compare Wrath of the Furies to, and why?

anything in the Scarrow eagle series

Loved the acting, especially in the more emotional scenes

Where does Wrath of the Furies rank among all the audiobooks you’ve listened to so far?

I've only listened to a couple, and it's on a par with those.

Which character – as performed by Casey Jones – was your favourite?

Centurion Bako was the highlight of the tale for me. Not only was he the best character in the story, but the narrator does a good job of bringing him to life.

Overall, I found this to be a highly entertaining audiobook. It's well written with a few different twists and turns and the various voices the narrator moves between was fun to listen to. It was certainly worth the money and a good way to spend a long drive!