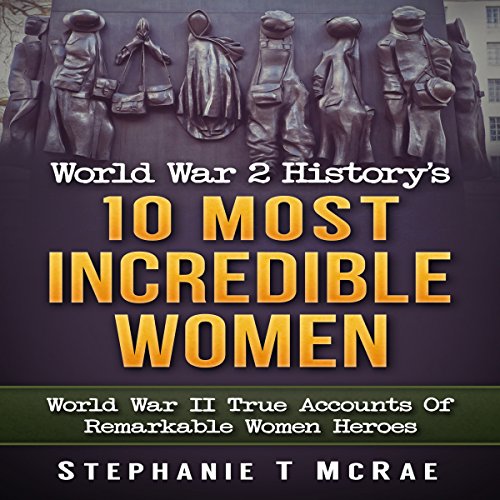 The events of World War 2 are often associated with male endeavor, particularly in war books. However, extraordinarily brave and courageous women not only assisted their male counterparts, but played key roles that had ultimately contributed to the success of winning the war. This book provides a platform on which to remember those fearless, forgotten WW2 women, whose stories deserve to be told. Who were these courageous women who laid their lives on the line in WW2 history?

These accounts highlight each woman's heroic role during World War 2, starting with their early lives, and covering the influences, decisions and circumstances which shaped their paths and finally focusing on the women they ultimately became. These were Women whose desire to contribute and affect change made them instrumental to the cause.

World War Two History's 10 Most Incredible Women is an essential resource for anyone interested in history or simply wanting to understand and appreciate these respected, tenacious and resolute women. Includes recommended resources for further learning.

This ended too soon! I would have loved to hear more about these women's lives, and more like them. I was enjoying it so much, and then it was done. Well worth the listen, just be prepared for a short listen!

Wonderful book, very informative, keeps you hooked throughout. I just wish it was longer! Highly recommend!

The only complaint I have is its to short. I could listen to true stories of brave, strong, and important women for hours. I hold the men that have fought in the highest regard, and it's about time that the women who also fought get the recognition they deserve.
Thank you!! Keep it coming! I know there are a lot more.