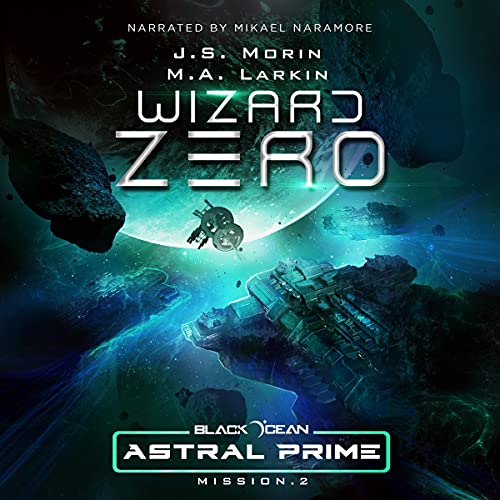 An ancient ruin holds miraculous technology and a deadly secret.

When a survey team unearths buildings on prospective mining planet, at first, it’s hailed as an archeological jackpot. But the ancient structures are more advanced than anyone’s seen. And the hedge against technology is a wizard.

Cedric and Hiroko lead a team to study the mysterious underground facility from a lost age. And when they discover the alien caretaker, he’s none too happy that primitives have infested his home.

Wizard Zero is the second book in the Black Ocean: Astral Prime series. It hearkens back to location-based space sci-fi classics like Babylon 5 and Star Trek: Deep Space Nine. Astral Prime builds on the rich Black Ocean universe, introducing a colorful cast of characters for new and returning listeners alike. Come along for the ride as a minor outpost in the middle of nowhere becomes a key point of interstellar conflict.

The 2nd installment of Astral Prime picks up basically straight from the end of Part 1, with the crew of Station YF-77 having found the ‘Shadow Planet’, and on that planet, having discovered ‘Dragon’ like creatures that have ‘Gravity Stones’ for hearts. These Heart Stones are powerful enough to emit the Gravity on large Military vessels, without all the messy complications usually associated with this sort magic/tech.
To enable the future of her Station, Hiroko has arranged for the sale of the Gravity Stones, and this attracts several interesting buyers, including the Stuunji, the Eyndar, and much to the Eyndar’s horror, the Zheen.
This book is a mixture of extremely fun moments, intensely powerful moments, highly political and military moments, but all it comes down to is sheer willpower.
During some very tense and also highly humourous moments of negotiation (nothing like having a Stuunji, a Zheen and an Eyndar all bidding on an item!), Hiroko decides to take the Ambassadors down to the planet to see first hand a new Archaeological site that has been discovered, a temple ruin that is billions of years old, pre-dating the existence of all known races. This visit to the temple however does not go as planned, and the team of Ambassadors, as well as the away team including Hiroko and Calvin are also trapped, possibly in mortal danger.
Suddenly the story goes from a bidding war over gravity stones to all the senior characters being trapped in an ancient temple that has some amazing ramifications for the Galaxy, and at the same time, the station crew are arguing with captains of all the ships trying to find out what has happened to their Ambassadors, threatening violence if they are not returned. Just when it couldn’t get worse, the ARGO Earth Navy arrive to try and take authority, even though they are out of ARGO space.
This is a full-on space adventure, with some brilliant combat scenes, the attention to detail is just masterful, giving the story just that extra edge. The character writing is what we have come to expect from these Authors, with such in-depth detail. Calvin’s internal struggle over what he is doing, what he is becoming, as well as the burden he carries to the station is a truly intriguing part of the story, it is incredibly well done. So is the character of Hiroko, and her inner battle with her traditions, but her loyalty to her crew, as well as trying to keep the station not just afloat, but start to turn things around for everybody (apart from people like Kane, who just has to watch and make sure he isn’t doing something nefarious)
‘Wizard Zero’ is were the crew of Station YF-77 really understand what the Shadow Planet is all about and what they have stumbled across, and it is also were the story really picks up.
This is an outstanding sequel to’ Shadow Planet’, and really shows just how brilliant the Authors are, even after all the other Black Ocean books, they still continue to turn out books of this quality. Can’t wait for Part 3!
Michael Naramore continues to provide outstanding Narration for this series, with not just the best range of voices for characters, but also doing an absolutely amazing job with the Xeno’s voices as well, giving us distinct languages for humans and aliens, as well as different gender. The Narration is very clear, so easy to understand, and that, combined with the exceptional story, the outstanding range of voices, and the Narrators ability to create tension in all the right places, this is one of those stories that is actually better as an audiobook and makes for a wonderful listen.