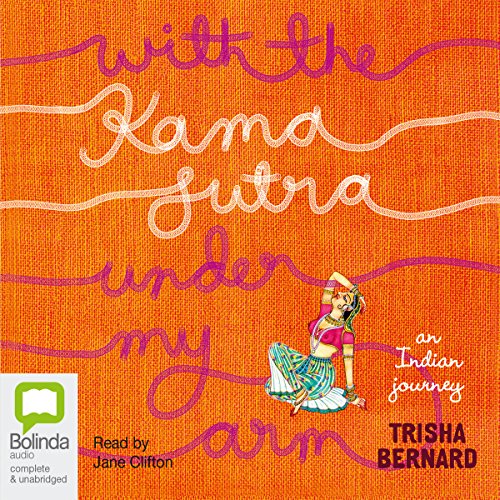 With the Kama Sutra Under My Arm

With the Kama Sutra Under My Arm

After she gets dumped, Trisha Bernard heads off to India with a copy of the Kama Sutra. This audiobook tracks her wild and unpredictable journey across the country from the crowded city streets to the remote Thar Desert. Australian actress Jane Clifton performs this tale grandly, with wit and excitement. She gets into the colorful characters, embodying their voices and personalities, making them leap alive. With the Kama Sutra Under My Arm: An Indian Journey is a great escapist audiobook, fun for anyone who has wished she could run away.

Having been left for another, Trisha decides that the best way to nurse her broken heart is to escape to India, armed with a copy of the Kama Sutra with its promise to teach her how to seduce a new lover, train a hawk (to carry love letters, of course!), furnish a house seductively, and seduce other women's husbands (well, maybe not that one). At the last minute, Trisha is joined by her long-lost backpacking companion, Sally.

Navigating the chaotic streets of India in death-defying rickshaws, and traversing the country on overcrowded trains and buses driven by speed freaks, Trisha and Sally find themselves almost marooned in the Thar Desert after an unfortunate dog incident, almost camel-napped in Rajasthan, pursued by a charging bull at Jaisalmer, attacked in no uncertain terms by an amorous monkey in Delhi, and stranded in a flooded hotel room in sodden underwear in the middle of the night at Mount Abu. And those were the good days!

" With the Kama Sutra Under My Arm: An Indian Journey, inspires more warmth than a vindaloo. Bernard falls head over heels in love with India and her keen sense of observation might just have you booking a flight to Delhi." ( The Courier Mail)