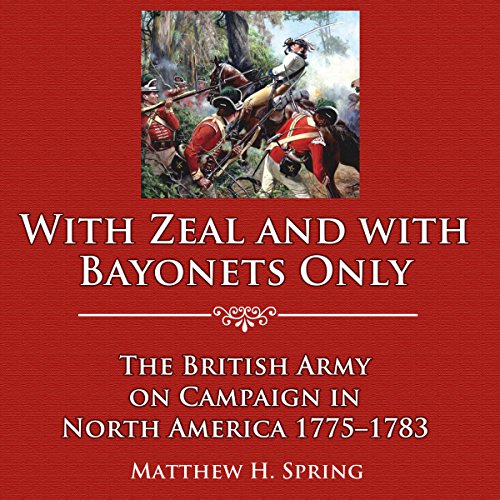 With Zeal and with Bayonets Only

This groundbreaking audiobook offers a new analysis of the British Army during the “American rebellion” at both operational and tactical levels. Presenting fresh insights into the speed of British tactical movements, Spring discloses how the system for training the army prior to 1775 was overhauled and adapted to the peculiar conditions confronting it in North America.

First scrutinizing such operational problems as logistics, manpower shortages, and poor intelligence, Spring then focuses on battlefield tactics to examine how troops marched to the battlefield, deployed, advanced, and fought. In particular, he documents the use of turning movements, the loosening of formations, and a reliance on bayonet-oriented shock tactics, and he also highlights the army's ability to tailor its tactical methods to local conditions.

Written with flair and a wealth of details that will engage scholars and history enthusiasts alike, With Zeal and with Bayonets Only offers a thorough reinterpretation of how the British Army's North American campaign progressed and invites serious reassessment of most of its battles.

What listeners say about With Zeal and with Bayonets Only

What would have made With Zeal and with Bayonets Only better?

This work requires a narrator who can do this important title justice. Mr Spring, I can only assume, will look on with incredulity as to to what as been inflicted on his book. An American narrator and no doubt editorial team have produced the worst reading I have ever heard. Americans have once again foiled the British Army.

With Zeal and with Bayonets only is probably one of the most important books on the British Army in North America for many years. It offers a revision of the long standing view that the British army was a mindless automaton that cared more about form and image and maintaining a straight line than winning the war and marched into Battle against a far more flexible and ultimately superior American Army. Matthew Spring demonstrates that this is not so and that the British Army fought with revolutionary Zeal, and his work will establish itself as a seminal title in this field.

John Skinner already possesses a strange talking voice that renders his use of inflexion suspect. This is compounded by the severe editing that occurs because he is incapable of reading complete sentences and his mistakes have to be spliced together resulting in awkward intonations mid sentence. The overall effect is of an American Stephen Hawkins. The proof of this hypothesis is starkly revealed in Chapter 9 as it is a completely unedited sequence. In it you hear Mr Skinner struggle repeatedly to read sequences, he stammers, he coughs, he mutters and asks for water when he should ask for forgiveness It is actually quite good comedy, but this is not a comedy piece. Clearly no one ever listened to this before it was released and may explain how such a poor reading was allowed to reach the market place.

If you could play editor, what scene or scenes would you have cut from With Zeal and with Bayonets Only?

This audio book needs to be withdrawn

This title needs to be withdrawn because as a minimum it is in places unedited and contains Mr Skinner's unintentional hilarious run through. Regardless of this it is still terrible because of the consequential splicing required to create complete sentences and the computer like effect it engenders.This is not a professional piece. More water Mr Skinner?

DO NOT BUY THIS AS AN AUDIOBOOK

Or rather, buy this book in a print format because it is an astoundingly good piece of work, carefully researched and thoroughly explained.

The audiobook however is a travesty - no fault of the author whatsoever. The narrator is poor to start with, but that could be forgiven, were it not for the total breakdown of narration by chapter nine into incoherent coughing and repetition. The editor (if there was one) should be shot, and to release such an important piece of work in such an appalling state is nothing short of criminal.

Chapter 9 sounds like a practice run. Hesitation, repetition, coughing. Really off putting. The story itself although factual is a bit long winded

a good study let down by a stilted presentation

Yes, because this is a seminal book in understanding the actual functioning of the British army on campaign in North America during the revolutionary war. Excellent use of first person accounts. Some of the material is dense but it's written clearly. Unfortunately, the narrator was not up to the task of bringing this fascinating account to live. I urge the potential listener to persevere, the content is worth it.

What was one of the most memorable moments of With Zeal and with Bayonets Only?

There is no single memorable moment. Overall however, Matthew Spring smashes long-held (and erroneous) beliefs about how the British Army conducted warfare when on campaign during the Revolutionary War. The opening chapters and the contemporary accounts cited liberally throughout the book help the reader understand strategy and tactics employed by the British army, how the army adapted to warfare on the North American continent, and why suppression of the revolution was a doomed enterprise from the outset. I might add, that to me at least, there appear to be obvious parallels between the British strategy and tactics, the rebel response, the geographical and physical context of the war, and the US prosecution of the war in Vietnam.

This book deserves a better narrator. Non-fiction history requires oral reading skills that the narrator does not possess. The major flaw with this performance is that about the beginning of Chapter Nine (a couple of hours into the second download) the Editors were asleep at the wheel. As a result, the listener will hear 30-45 minutes of the narrator stopping, starting, repeating words and phrases, stumbling over names, trying several different inflections, clearing his throat, making side comments, and the like. It's clear that either no one at the production company listened to the whole book, or they mistakenly uploaded the wrong version. I simply had to skip much of that chapter. Were I the author, I'd be foaming at the mouth.

Yes, and it would be an interesting movie too!

I've notified Audible about the problems with Chapter Nine, but have not heard back from them. I hope they will put up a properly edited version soon!

It was painful to listen to this book. I thought it was narrated by a robot. I deleted this book before the end.

The history was great.

A dreadfully boring narration. PLEASE re-record with another voice. No robots.

A great documentary in this material.

PLEASE re-record with a live narrator!!! Or provide a refund.

they recorded the guy while he was practicing!

great book, but in chapter 13 or 14 you cab hear the narrator messing up, and rereading part of the chapter lol

Would you try another book from Matthew H. Spring and/or John Skinner?

I loved the book; I have it on my Kindle. I read more of Spring's books. The Narration was terrible, wooden, blocky, WORSE than a computer voice. I would rarther have the Kindle computer voice read than this Narration. I cannot listen to this!

What other book might you compare With Zeal and with Bayonets Only to and why?

I love the book,

Would you be willing to try another one of John Skinner’s performances?

The Narration was Terrible. I have 200 + Audible titles. This is the WORST Reading ever. NO do not get a Skinner reading.

If you could play editor, what scene or scenes would you have cut from With Zeal and with Bayonets Only?

I would not cut from the book, but i would change the Reader.

The editing is terrible at the the 13 hour mark.

I struggled to finish this book. It's a dry book, I came in with that anticipation, but it's a topic I have a great deal of interest and I was able to adjust to to the narrator being a bit robotic and gained the knowledge and learning I was looking for. until I hit about the 13 hour mark where the editing ceases. The narrator begins regularly clearing his throat, coughing, at one point he states, "I need water." and "That's not even a word." That is a problem with editing. It continues for approximately 45 minutes. it was excruciatingly painful. That section needs to be fixed. I will be seeking a refund.

This audio book was disappointing. It spent too much time discussing minutiae of the British army often in battles that are largely unknown to people familiar with the battles of the revolutionary war. Virtually no time on analysis of leadership and strategy or personalities of British leadership/campaign objectives. Chapter 8/13 was the worst audio segment I have heard with it sounding like a stuck recording and the narrator clearing his throat/repeating himself. I would not recommend this audio book to others

Great book and very informative, however the narrator was very dull and the and the reading was not edited in about the 14th chapter when the narrator struggled for about 5 minutes stumbling over words and even commenting that he needed a drink of water. overall it was a great book.

Where Was The Editor?

Around the 3hr 30min remaining mark there is no editing. It was humorous in the beginning when the narrator stumbled, cleared his throat, asked for water, messed up over and over again, restarted over and over and over, but after several minutes it becomes very tiring. I returned this book, the only one I have ever exercised that option to do so.

narration was robotic and unemotional unfortunatel

narration was slow and robotic and unfortunately unemotional. the listening of this book stopped after 1 chapter very sad