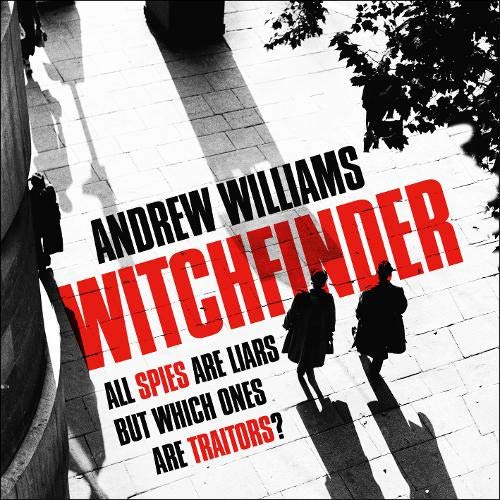 By: Andrew Williams
Narrated by: Richard Mitchley
Try for £0.00

A brilliant novel of espionage and betrayal from 'one of Britain's most accomplished thriller writers'. (Daily Mail)

London, 1963. The Beatles, Carnaby Street, mini skirts. But the new mood hasn't reached the drab and fearful corridors of MI5 and MI6. Many agents joined the secret service to fight the Nazis. Now they are locked in a Cold War against the Russians.

And some of them are traitors.

The service has been shaken to its core by the high-profile defections of Cambridge-educated spies Burgess, MacLean and now Philby. Appalled at such flagrant breaches of British security, the Americans are demanding a rigorous review.

Harry Vaughan is brought back from Vienna to be part of it. The Chief asks him to join two investigators - Arthur Martin and Peter Wright - who are determined to clean out the stables, and the first target of their suspicions is the Deputy Director General of MI5, Graham Mitchell.

Harry slips back into a relationship with an old flame, Elsa, and joins the hunt - somewhat reluctantly. He is sceptical of the case against Mitchell and wary of the messianic fervour of the two spycatchers. But the further the investigation goes - and the deeper his commitment to Elsa becomes - the greater the sense of paranoia and distrust that spreads through the 'wilderness of mirrors' that is the secret service.

The only certainty is that no-one is above suspicion.

What listeners say about Witchfinder

After reading (and listening on Audible) to all of Len Deighton’s Bernard Samson’s books I was at a loss of where to go next. Luckily I happened upon Andrew Williams’ Witchfinder which when I first read its review I did think I’d take too as it didn’t come across as a story novel but more of a historical tale. But I was mistaken. Andrew Williams has in this book crafted a great and thrilling read which is so linked to actual historical evens that it draws you in even closer to to the story. Trulely Andrew Williams has in this book I feel picked up where Len Deighton left off and created a great story telling the history of the UK’s search for the ‘Fifth Man’ in a compelling and narrative style that makes you feel that you can’t put the book down. Unfortunately this is only one book but at the end of it Andrew Williams hints that a sequel is to come and personally I can’t wait.

Couldn’t put my earphones down!

Fascinating fictional account of the hunt for the 4th and 5th man. Brilliantly voiced and written with a pleasing eye to detail. Some lovely turns of phrase and humour - the fairground ducks made my laugh out loud and as beautifully sad a love story as it was a thrilling spy story. My only disappointment was not encountering Jackson Lamb as it felt very much of his youth!
Highly recommended but make sure you’ve a day free to listen as it’s very hard to switch off.

I really enjoyed this book. If you enjoy Le Carre, Deighton or the more recent world of Slough House, I think you are pretty much guaranteed to enjoy this. Based around true events, this paints a very vivid picture of spy machinations in the 1960s. A lot of real life individuals are mentioned and I frequently found myself looking up their Wikipedia pages alongside reading the book.
The narrator is excellent, I’ve looked to see what else he has read and not really interested in the other books he’s narrated but I hope he does more spy books in the future.

A gem among spy thrillers!

Witchfinder by Andrew Williams is an outstanding book. It’s a fictional account of the witch hunt for further moles in the British secret services after the defection of Kim Philby. It’s complex and intelligent, and the narration by Richard Mitchley is masterful. A superb listen that I will revisit. I shall buy a hard copy of this book and place it on my bookshelf among my favourites.

Its a very good story, written well, very atmospheric, it puts you in the time, makes you Le Carre in your own mind. A huge part of it for me is the narrator, really does a great job setting the scene, the accents, and gruffness of his voice makes you think of Richard Burton.

Heartily recommend this one, as the other reviewers have said, this is a good one.

If you enjoyed Len Deighton's 'Hook, Line and Sinker' series of spy novels, you'll enjoy this one. Similar style with similar emphasis on characterisation, atmosphere and plausibility. Recommended for espionage afficionados.

I've bought a few of Len Deighton's cold war audiobooks and Amazon recommended Witchfinder. I hadn't heard of it or the author but decided to try it. It's genuinely excellent, really well written, very interesting and compelling. Narration is first class. If you've read Deighton, Le Carre, Peter Wright, Chapman Pincher et al then this ought to be on your list.

This is the best book I've listened to for a long time.A very enjoyable novel.

I downloaded this book based on the rather wonderful cover and subject. So I was thrilled to find this is an outstanding classic Cold War book with wonderful characters, story and those essential upper class Englishmen in offices and clubs that all these types of books needs.Very nicely read also. Would love some more of this period from Andrew Williams who clearly has a flair for it. Anyone interested in the spy world of this period would enjoy this.

Slow start but picks up

Having read Spycatcher and all the Le Carré novels, this was familiar and a little slow to get going. However it does pick up and I found myself returning to it for longer periods to find out what happens next. Worth a listen even if you know the history, but probably best for those who have not yet discovered this period of the Cold War.