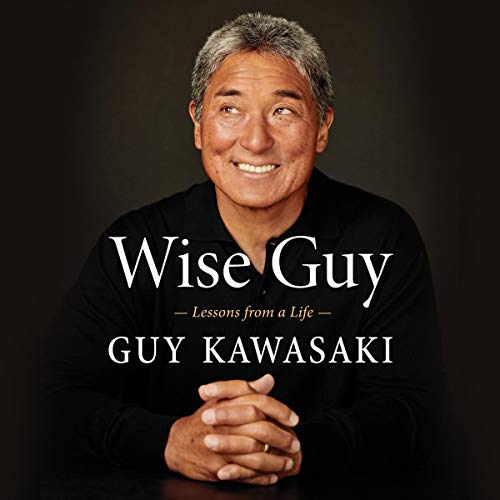 By: Guy Kawasaki
Narrated by: Dan John Miller
Try for £0.00

Silicon Valley icon and best-selling author Guy Kawasaki shares the unlikely stories of his life and the lessons we can draw from them.

Guy Kawasaki has been a fixture in the tech world since he was part of Apple's original Macintosh team in the 1980s. He's widely respected as a source of wisdom about entrepreneurship, venture capital, marketing, and business evangelism, which he's shared in best-selling books such as The Art of the Start and Enchantment. But before all that, he was just a middle-class kid in Hawaii, a grandson of Japanese immigrants, who loved football and got a C+ in ninth-grade English.

Wise Guy, his most personal book, is about his surprising journey. It's not a traditional memoir but a series of vignettes. He toyed with calling it Miso Soup for the Soul, because these stories (like those in the Chicken Soup series) reflect a wide range of experiences that have enlightened and inspired him.

Guy covers everything from moral values to business skills to parenting. As he writes, "I hope my stories help you live a more joyous, productive, and meaningful life. If Wise Guy succeeds at this, then that's the best story of all."

What listeners say about Wise Guy

I found it quick and easy to follow. The book is filled with nuggets of wisdom and advice

Love all of Guy's work!

enjoyable and captivating! Once again Guy has had me hooked from the start and I'm certain they're all useful snippets of information!

I've had this book on my Audible wish list since I saw Guy post a note about it on LinkedIn. My exposure to Guy came from a link to one of his TED Talks, which was my gateway into following him. There are several instances in this book where he touches on topics he discussed in previous forums. I found this enjoyable because I could tell those moments or topics made an impact on him since they kept coming up.

The narrator is Dan John Miller and I was pleased to find his pace, tone, cadence matched the content of Guy's words perfectly. Guy is a noted public speaker so I would have enjoyed hearing his stories and learnings in his own voice. This is not a criticism of Miller. His narration was great for this book.

The pace of the book is easy to follow. I listen on my commute to and from work. I have found myself sitting in my car in the driveway waiting to go inside because I want to finish a section. Each section ends with words of wisdom, which is great. You get the story and then the takeaway to apply in your own life.

Wisdom: Learn from those who you consider successful and never stop learning. Now I have to go double check my review for double spaces, passive voice, adverbs and correct usage of "which" and "that".

As a business owner who often feels overwhelmed, I find Guy’s attitude, wisdom and fortitude inspiring. He is one of those people you want to know personally.
Guy is such a captivating speaker, I wish he narrated this book himself.

Not much wisdom here

This is book is presented with an an arrogant, “I am better than you so you better listen to what I say” attitude.

I picked this book up in a 2-for-1 deal, and to be fair, wasn’t sure what to expect.

To my surprise, it is warm, witty, and full of relatable advice and humour.

The narration is superb with Dan Miller perfectly capturing the tone of the book.

My piece of wise advice? When preparing a pitch doc, use a black background with white text.

I came across Guy as I was working out and perusing different Ted Talks. Guy was vibrant and his message resonated with me. I actually purchased a book about influence via his recommendation during his talk, finished it, then thought I would Google whether Guy had any material published. Yes. Yes he does :). I appreciated the way he shared vulnerable stories that enable us to connect and grow ourselves. Being a busy human, I also appreciate that he concluded each story with a “wisdom” follow-up. It meant that if you had been passively listening, it’s time to tune in for a nugget of knowledge. In the simplest terms, this book made me better. Guy being hardworking and super successful yet never missing his children’s games is something that I aspire to achieve. Many, many lessons here, it would be a disservice if you did not check this out.

I was recommended of this book by a business associate whom I’ve done business with from way back.

Guy has a great way for story telling, I love his no nonsense, get to the point, totally honest style of sharing on not just business experiences but also great life tips. I would totally recommend to anyone who is looking for a bit of direction re-alignment in life (like me) not because one is lacking of, but a new and honest view from a different angle that may yield unexpected surprises.

Great job Guy - I really hope this will not be your last book, as I’m sure you still have so much more to offer to the world 😁

Good overall lessons but not mind-blowing!

I enjoyed this book on the surface, but found it to be lacking in any real advice. By his own admission Guy has fallen or stumbled into most of the triumphs of his life. I found it humorous and I appreciate the stardust that he's made out of. For many people this just doesn't happen no matter what they do. I personally will take a few gems from the book. I guess that's all anyone really needs is a few gems anyway.

Having just met Guy and his family on NYE, I can attest to the fact that he is a standup guy. Always smiling and seemingly always kind and supportive of his family. Guy if you're looking to adopt another child, I volunteer myself. :)

an awesome book that will force you to master rewind and bookmarking capabilities....that and listening to it more than once is a given. Simple and revealing in its delivery.

I have to admit I vaguely knew of Guy’s work but saw a recommendation from fellow surfer Bob Pearson and was intrigued to learn the connection.
I loves Guy’s outlook on life and principals he lives by. I am definitely a new fan and looking forward to reading more of his work.
Guy, thank you for the hard work of putting this book together. You’ve not only earned a new fan but a new friend in the lineup. If you ever find yourself in Oregon I’ll have a spot saved for you right next to me🤙.