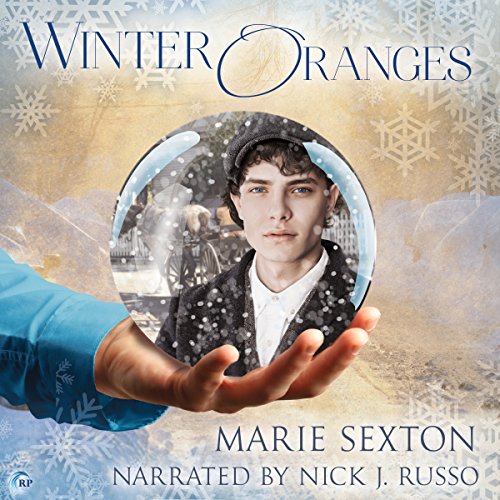 Jason Walker is a child star turned teen heartthrob turned reluctant B-movie regular who's sick of his failing career. So he gives up Hollywood for northern Idaho, far away from the press, the drama of LA, and the best friend he's secretly been in love with for years.

There's only one problem with his new life: a strange young man only he can see is haunting his guesthouse. Except Benjamin Ward isn't a ghost. He's a man caught out of time, trapped since the Civil War in a magical prison where he can only watch the lives of those around him. He's also sweet, funny, and cute as hell, with an affinity for cheesy '80s TV shows. And he's thrilled to finally have someone to talk to.

But Jason quickly discovers that spending all his time with a man nobody else can see or hear isn't without its problems - especially when the tabloids find him again and make him front-page news. The local sheriff thinks he's on drugs, and his best friend thinks he's crazy. But Jason knows he hasn't lost his mind. Too bad he can't say the same thing about his heart.

The performance from the narrator is also very important for me. I can't listen to a lot, because my English as a non-native-speaker isn't so perfect to follow a whole story over hours, when the narrator speaks too fast or too sloppy. Normally I have to SEE the person, who is talking to me in English. Nick J Russo is one of the top 5 narrators for me, I can listen without break and have no problems to follow.
I'm just not yet finish with the book, but I listen enough to give a review.

heartbreakingly angsty, I loved it!

This story kept me on the edge of my seat. I adored Ben and Jason. Dylan drove me nuts but redeemed himself. Great narration. ☺

The story was so endearing, There were some great laugh out loud moments and a few times I had tears of sadness or joy in my eyes

What was one of the most memorable moments of Winter Oranges?

When Ben wanted to know who shot J.R.

Have you listened to any of Nick J. Russo’s other performances? How does this one compare?

I bought the book because Nick J. Russo was the narrator. I've heard a couple of his other performances and I have to say that he is very good. A narrator can bring a book to life in so many ways, but a bad narrator can kill a story. Nick is the former. I'm sure I'd have enjoyed the story if I'd had read it in book form myself, but Nick gave his reading so much gusto I couldn't press stop on the player.

Yes, but I don't want to give any spoilers

This was such a great story and so well narrated. As I have said, I was looking for books narrated by Nick J Russo when I found this story. I am now currently listening to Marie Sexton's Trailer Trash and I am sure that I will be checking more of her audio books out in the future.

This is a sweet and cute MM Romance story. I enjoyed it because it was different than any thing that I've listened to before. It's a little magical & Christmasy and left my heart a little lighter.

The narration was perfect, I really enjoy Nick J. Russo and can't wait for more of his work. He gave each guy his own voice which is exactly what I need in an MM audiobook.

When Jason Walker, a B list actor finds himself in a small town “re-thinking his life”, he’s shocked and amazed to find he’s not living alone.

Ben is the boy who “haunts” a snowglobe he finds in the house left by a previous tenant.

Jason, ironically a B list horror film star, is either crazy or Ben is real and a “ghost”.

I don’t want to give away big secrets but I will drop these morsels:
Ben and Jason find a way to “touch” one another
Jason is the only one who can see Ben
Neither knows a way other than death for them to be together in “real life”
This book ends with a delightful HEA

I think this may be my favorite Marie Sexton book (after her Coda series). Her writing is gorgeous and evocative and really draws the reader in from the first page.

The way she “solves” the main dilemma is both terrifying and wonderful!

I highly recommend this story to fans of the belief that love conquers all, for people who believe that there are Christmas miracles, to believers in magic and to fans of sweet and sappy romances everywhere!

Nick J Russo does another amazing job. He’s easy to listen to and really carries the emotion well. My only disappointment was that he didn’t give Ben an “old fashioned” voice or any sort of voice inflection or accent. He sounds just as anyone else would in our day in time and I guess – in a way that makes sense – but I was hoping for something a little different. Just something to remind us that his voice is coming from a music box…

In any case, it was still wonderful and a fantastic way to experience this amazing story!

If you buy one audio book this year get this one

I don't know if I can relay to you how amazing this story is it has everything from two very strong main characters to a creepy home. This book is on my re-read list. Marie Sexton choose the perfect narrator for this. Nick J. Russo made this come more to life. Fantastic work both the author and the narration.

Would you consider the audio edition of Winter Oranges to be better than the print version?

I didn't read the print version, but Nick J Russo brings the story to life so I would imagine that would. The story is so good its a win either way!

Ben! He is unusual. Both only 21 around 150 years he is sweet, naive but caring and compassionate. if only we all could see the world through Ben's eyes.

What about Nick J. Russo’s performance did you like?

I love Nick J Russo. I love the way gives each character a personality of its own. I like the soft whispers and the way he projects each character's view into the story.

I had many reactions. I wanted to smack Dylan. I nearly cried when Dylan left the first time to go see a girl, leaving Jason alone. I could feel Jason's heart break. and of course, the end was very emotional.

Jason is a b -list actor and ready to retire. or at least take off for a while.He has been in love with his best friend for a long time and needs a break from both work and his emotions. He spots a face in the guest house and eventually investigates.He finally gets over his fears and finds out Ben isn't a ghost but has been sealed n the globe by his sister to prevent him from joining the civil war.

Ben is adorable. He is sweet, naive and still sees the world as an unjaded young man.
The more Jason see Ben the closer they become.

Winter Oranges is amazing! It is a sweet story with intriguing characters.The story is beautifully written. There was so much emotion in the story. I think it's one of the best I have listened to this year. I was pulled n from the beginning and didn't want to stop once I started.

If you like horror actors, a hint of magic, and a very sweet romance this is for you!

very please with this audible .
I adored this storie .
exellent narration. wonderful sweet storie.
I recomend this one if you love the book you will love the narration also.
the main charters were awesome . the storie was great..... loved all of it.🍊

I loved it, one of my favorites

great storyline , loved the narrator.great ending. can't wait to get another from the same author

A story that is one of a kind

I have never read, or listened in this case, to another book like this. I'm 31 and have been a readaholic for the better part of 20 years. This book truly is one of a kind. I have always loved snowglobes but have never thought, "Is there something alive in there???" As absurd as it sounds I'm now rethinking All of the snowglobes I've ever come across lol but then it makes me sad that maybe there was a 170 year old spirit trapped in there just wanting to get out and interact with anyone. This is an amazing story and a must read/listen. So many emotions came out of these characters I truly felt like I was in the book with them. Happiness, sadness, doubt, pain, love, fear, hopefulness..... The list is endless. I know most authors are proud of their work or they wouldn't publish them. (At least good authors wouldn't) but Marie Sexton has went above and beyond on this book!!

Ben is a breath of fresh air that breathes new life into you. Just what Jason needed. A uniquely different story than I'm used to which I enjoyed immensely. I was so involved with this book to the point I felt I was there witnessing it all unfold. Happiness, joy, sadness, pain, doubt, love, understanding, and hope, so much hope. Beautifully narrated as well, Nick's performance was the icing on that of this audiobook. I will never look at snow globes the same again!

I have enjoyed listening to this book, but I found it very creepy. It's creepy but romantic.

I fell in love with this book during the first chapter. Ben and Jason were wonderful characters. Their love story was sweet and poignant. This book is beautifully written, and Nick Russo did an excellent job with the narration. Nick captured the essence of each character's emotions perfectly. I laughed. I cried. And I found myself invested in the outcome of the story.

This book has all the feels. I am looking forward to reading more of Marie's books.