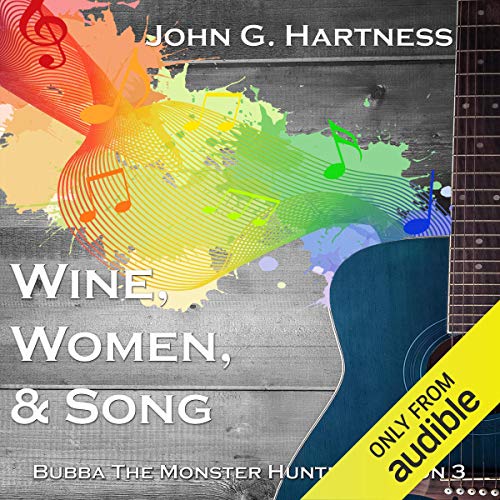 It's been a year since Bubba settled things with his crazy brother Jason once and for all, and what a year it's been! The third volume of collected Bubba stories contains more monsters, more inter-dimensional travel, more duels to the death, and more guitar solos than any other season of Bubba yet!

Wine, Women, & Song is a collected edition including the following four novellas:

Moon Over Bourbon Street - Bubba and the team are on vacation in New Orleans, but it's anything but easy! There are vampires hunting people, a hot chick in black leather on a Harley, and a butt-nekkid voodoo priest! How in the world is Bubba supposed to stop drinking Hurricanes and figure this mess out?

Night at the Museum - Bubba gets all cultured up when a mysterious figure from Uncle Father Joe's past drags him into a mess of romantic entanglements, butt-kicking suits of armor, ticked-off museum exhibits, and disembodied vampire heads trying to kill him. And that's not even the scary stuff!

Midsummer - By far the most highbrow Bubba adventure ever, which ain't saying much. There are missing kids in Nashville, and Bubba and Agent Amy are called in to investigate. Bubba has to learn how to put an app on his phone, then gets sucked into a dimension with no cell service when Shakespeare meets Pokemon Go! Bubba has to find the missing girls, escape from prison, and rassle an alligator before he can get back home and get some famous hot chicken!

Oh Bubba, Where Art Thou - a Christmas romp full of guest stars as Bubba tries to save the country music industry from Auto-Tune, bro country, and demons. Guest star Hank Williams Sr. takes Bubba through time in this redneck Christmas Carol. Can Bubba save country music, or are we doomed to an eternity of Luke Bryan and Florida Georgia Line?

I had no idea that Bubba was on audio. None. I am straight up flabbergasted. I treasure the misadventures of Bubba and his pals, and the way my schedule had shifted I lost the time to do any sort of reading. My Bubba buying days were over, and I had to bid farewell to one of the funniest series I had ever read! Then, lo and behold I discover that John G. Hartness went and started putting his books on Audible. I found out via Messenger on facebook, and when I did I started shouting and yelling and my wife asked me what was going on, and I said "Bubba's Back!!!" I had really missed him. Turns out that Season three was right where I had left off, I had missed Old Hank's appearance, so I started it all over from the beginning and listened until I got to the new section (yeah, I can wait all day on Christmas to open presents, so no sweat). By the time it was over it felt like Old Home Week. I had revisited long lost friends whom I had deeply missed.

One thing that really sold me was the amazing way that John Solo filled in with the voices. Whenever I had read a Bubba Story, I always heard Tim Wilson's voice. He's a comedian/singer who makes occasional appearances on the Bob and Tom radio show and he sings a song called the Beer Belly Blues. Well, if you listen to him and Solo's version of Bubba they are pretty dang close to one another. That suited me right down to the ground. He does amazing other voices too, not just Bubba. He has a handle on the whole cast, and makes this have the feel of an audio stage production. I will say that the man knows how to read a story, and nails the comedic timing and inflections. Hecksfire, I daresay that he vocally embodies Bubba to a tee. As for the stories, well they are all action packed and filled to the brim with some rough and tumble humor. I daresay that the series could stand alone without all the funny business, but then it would just be like every other monster fighting series. The humor takes it to another level. In this season, kinda like tv innit, we see the big fella fighting vampires, a bare arsed voodooin' priest, the legendary Puck, suits of armor ala Scooby Doo, and an appearance by hank Williams, Sr. I honestly think the biggest adversary he faced in this collection was his phone, when he not only had to put an app on it, but play a game as well.

Bubba the Monster Hunter is an amazing series that you would be wise to pick up, and not pass on. Because if you pass on it you will regret it until you yourself pass on. Skeeter, get me outta this mess! Seriously, this is one of those rare series in which you like the protagonist even if he is a drunken lout who likes going to strip clubs and pickin' on his pal, Skeeter. Don't miss out on the pure fun, the pulpy action, and the paranormal activity. Even though I did receive a promo code for this review it in no way influenced my considerations of the material, and in fact, inspired me to be more honest. In fact, getting a code generally makes me harsher as a reviewer as I am more often concerned what someone like Me will decide based on my review.

Saving The World From Evil

This audiobook is a 2018 ABR Finalist and with good reason. First of all, it is funny. Yes, I know it is about a monster hunter, and various paranormal beings of insalubrious character meet an unpleasant fate amidst blood and gore and fighting and shooting and general mayhem; think "Bruce Willis Blockbuster" for special effects. But I reserve the moniker of "Horror" for stories that have me peering under the bed with a flashlight (and not just to look for a dropped earring), worrying about nightmares. Season 3 makes me wish to have read Seasons 1 and 2, not because the three tales in this book aren't each standalone but because they are so much goldarned fun!

I've heard John Solo narrate other books and he does a great job as a midwesterner (including the women's voices). But Bubba is Deep South and I didn't catch a misstep in John's drawl or stylization of vocabulary; each character is distinctive and (with the exception of the beer wagon driver who's purported Irish accent came off as a Jamaican-Norwegian mashup-which was also pretty funny!) vocalizations are first-rate. Author John Hartness is clearly having a wonderful time spinning his tales and I had many a fabulous hour enjoying them. Well done all around!

I love the way Hartness writes. the narrator's bring it across very well
laugh the whole time

this has to be the best"Bubba the Monster Hunter" book yet. can't wait to hear the next one.

A fantastic series. I can't wait for the next one to come out. just the right mix of funny and action pack. Like if deadpool was a giant redneck monster hunter

Left me screaming for more. can't wait for the next book in the series to release.

I LOVE this series and it just gets better! Great adventures while tackling timely issues. Did I mention ROLFMAO funny!! The Reader couldn't be more perfect. Highly recommend!!

I‘ve been a fan of John G. Hartness since reading my first Jim Knight story. When my son and I discovered the Bubba the Monster Hunter Series, we found something that made a special little bonding time for us. We have laughed, been on the edge of our seats and even shed some tears in our journey with Bubba &amp; the gang. This Season’s adventures didn’t let us down. Well, maybe with some of the vocabulary lessons for my son but he knows better than to exercise his new words. John Solo does quite well with all the voices and few, if any, sounded like previous extras in the stories. I strongly recommend Wine, Women &amp; Song if you want to sit and listen to stories that sound like tall-tales of your favorite friends. Y’all come get som’!
#BubbatheMonsterHunter
#AUDIBLE 20 REVIEW SWEEPSTAKES ENTRY

Bubba does it again !

I absolutely love this series , it has humor wit sarcasm blood guts gore and love all rolled into one outstanding book and delivered by an outstanding performer John Hartness . I have grown to love the characters and invested in the story line as much if not possibly a bit more than the Anita Black series of which I have been a fan for many years ! I hope many more adventures are on the way for Bubba I'm impatiently waiting !!!!