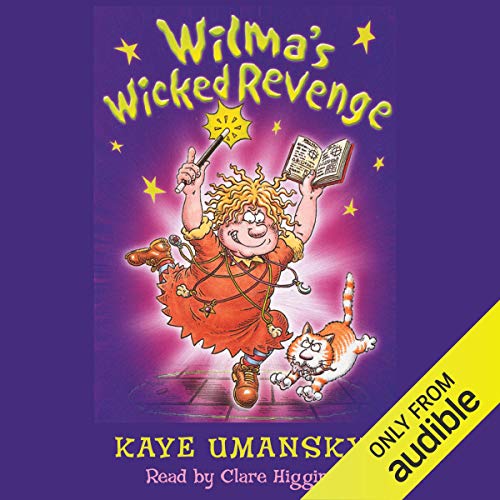 Wilma's older sisters are not only bossy, but are wicked queens too. Wilma is too young to be a wicked queen, but she does have her Grade Three Magic certificate, which will help her to plan her revenge on her bossy sisters.
©2001, 2006 Kate Umansky (P)2014 Audible, Inc.

Very funny, well read and an interesting story to boot. I would recommend to anyone with kids

Wilma's grown sisters would treat pond scum better than they treat Wilma. But then, they're professional Wicked Queens. Their mother is too busy being Queen of the Night to bother about fairness. Their father, a mere mortal, means well, but can't keep up, so he focuses on gardening (not that there's enough sunlight for vegetables in the Queen of the Night's domain). And, after a more-than-usually-distressing crisis, Grandmother shut herself into the belfry, where she fires blasts of magic at anyone who disturbs her.

Since Wilma has no one to defend her, she resolves to defend herself, and to take revenge on her sisters while she's at it. (Anyone who has ever been the picked-on youngest will sympathize.) Interfering with her powerful sisters' plans requires all Wilma's cleverness, all her magic (she's passed Level 3), plus all the help she can get. Her father's new garden assistant is willing to help her, although he and Wilma have extremely different ideas of what's acceptable behavior. In the process, they rescue a dog, and uncover (and solve) a mystery.

This is an entertaining, light-hearted story, and Claire Higgins reads it very, very well.