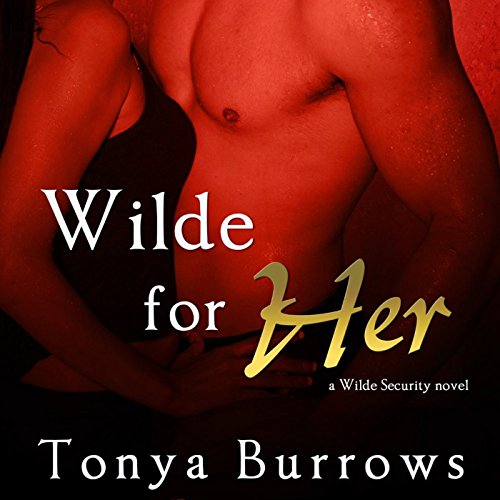 Former homicide detective Camden Wilde has been in love with his ex-partner Eva Cardoso for longer than he cares to admit. Not that it matters. She's shoved him into the friend zone, and after living through the hell of his parents' violent deaths, Cam's unable to give her the idyllic life she secretly desires.

Eva's never met a person who hasn't let her down. Cam may be sex personified, but he's the only man she can trust, and there's no way she'll risk their friendship on the off-chance they could be more. Especially not after the one scintillating night she's trying - and failing - to forget.

When a murder-for-hire contract on his head lands Eva on his doorstep, Cam knows it's time to put up or shut up. He's done biding his time, and he'll be damned if he lets the delectable detective ignore what's between them, no matter the cost.

Yes. The plot had twists and turns that kept me listening to find out what was going to happen next.

What other book might you compare Wilde for Her to and why?

Wilde Nights in Paradise, also by Tonya Burrows. The plot development is tight and the characters are well developed. Mystery and romance mixed with steamy love scenes make for an intriguing book.

Which character – as performed by Eric G. Dove – was your favorite?

Yes, at the end when Eva declared that she would pick Camden always over any one else even though the bad guy was holding a knife at her throat.

Can't get enough of the Wilde brothers. always exciting , sexy and satisfying. can't wait to read the next one.

Wilde For These Brothers

WILDE SECURITY is perfect for romance readers who like series about families. Each brother finds their HEA while strengthening their relationships with one another.

I enjoy a male narrator for a lot of my romance novels just because the male parts are always my favorite, but I have to say that I think Eric G. Dove is one of the best. His voice is just so smooth and deep. I love to listen to him. To make it even better, he does not make his females sound dimwitted like so many of the male narrators do. (And it's nothing against male narrators, but for a man to take on a female style voice, they tend to get breathy which a lot of the time makes the female characters sound dim-witted...Eric G. Dove does NOT have that issue.) If I ever release any of my books on audio, he will be at the top of my preferred narrator list! He has a great voice with a lot of different inflections and I love the way he narrates the Wilde men.

So, this story...
This story is about Cam. He's one of the twins and I love the two of them. Vaughn and Cam are close, closer even than they are to the rest of their brothers...and mind you, they all work together so as a whole, they are a close group. But I love Cam and Vaughn. The issue is in this book...someone is trying to kill Cam...oh, and yeah, Vaughn has his face too. See where this might be an issue? As a result, Cam is trying to keep this entire investigation and himself away from all his brothers. He doesn't want anyone caught in the crossfire. But when his informant that told him about the hit ends up dead, everything gets complicated.

And that pulls Eva into the case. Not only is she Cam's best friend, she's also his former police partner and a homicide detective. Throughout the course of this story, their friendship morphs into more. But both Cam and Eva have issues that make a commitment between them difficult. Cam NEVER sees himself as a commitment guy and Eva knows that. She on the other hand, has this unrealistic, idealistic view of a committed relationship. What they have together works...it's just that neither of them can see the potential in that.

It was a good book. I listened to the entire thing with the audio version. I did mention how yummy Eric G. Dove's voice is, right? Now the issue is...book #3 is out, but not in audio yet. Do I wait? I really don't want to because I love the Wilde brothers and am ready for another one of their stories, but I love listening to this series on audio. I think I'm just going to have to keep an eye on Audible and hope it comes out soon. (Note...this review won't post until late November, but I wrote it in early October, so that status may no longer be accurate. I'm really hoping it won't.)