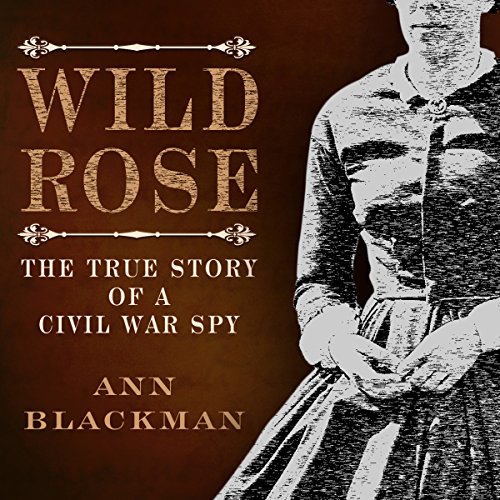 Wild Rose tells the story of Rose O'Neal Greenhow, the beautiful Southern socialite who became a spy during the Civil War, using her high-powered relationships in Washington to pass critical information from Union insiders to her allies in the Confederate Army. Friends with the nation's most famous and powerful politicians, including Senators Calhoun and Webster, James and Dolley Madison, Jefferson Davis and President Van Buren, Rose had incredible access to military intelligence and her secret communications to the Confederacy directly affected the war, and troop movements of both the Northern and Southern Armies.

In addition to chronicling Rose's dramatic career as a spy - revealing how she loosened tongues and strategically seduced important figures - Wild Rose paints a portrait of Washington D.C. during the Civil War. You feel you are walking around Washington, as this vivid work shows how upper-level political battles were played out in Washington social circles, and how the intense debate over slavery affected daily life in the capital. Blackman's portrayal of Rose's dramatic personal life enhances the chronicle of her wild career. From her earliest days on a Maryland tobacco plantation where her father was murdered by a slave, to her drowning at sea following a mission to Europe for the Confederacy, Rose's life was full of passion, inventiveness, and drama. In Wild Rose, Ann Blackman treats us to a superbly-researched and wonderfully readable portrait of a unique and influential woman, renowned for her beauty and her tenacity, who played an extraordinary role in this nation's early history.

When this book sticks to the subject matter it moves quickly, it's very interesting and it provides a lot of new information even to Civil War buffs. Unfortunately the author appears to the need to "balance" the poor northern treatment of Rose and her daughter by throwing in chapters about slavery. In case you didn't know slavery was bad. The chapters on slavery were completely unrelated to the story, as in it was COMPLETELY unrelated -- as in if you skipped them it doesn't change the story at all as you miss nothing as it's unrelated. That's really a shame since it brings the book to crawl as it eats up hours and provides nothing new you haven't read already. If you haven't read much on slavery or if you think it was good then perhaps it's a different story and you'll find these parts more interesting.

Overall the book is interesting and I do recommend it regardless of your familiarly with the Civil War. Because of the nature of the subject matter it comes off as pro-Southern, which is why I believe they tacked on the slavery chapters, that part is a shame since it just slows the book down tremendously. When I saw the book is pro-Southern I don't the author is, I just think because of the point of the view the story is told from you end up sympathizing with Rose, and even if not you certainly do for her daughter.

Checkout this book if the summary sounds at all interesting to you, but in an effort to keep the story moving don't feel guiltily about skipping the slavery sections if you're already familiar with the subject matter. I listened to it for you, I didn't skip anything, I expected that it would somehow be tied back into the story and it wasn't. I listened so you could skip it.

This book covers area's of the Civil War less well known. The book is well researched and well written except it dragged in area providing more background information than was necessary. The book covers the life of Rose O'Neal Greenhow a southern socialite and civil war spy. It starts with her childhood and covers the years as a spy in-depth. She was an intelligent,vivacious and beautiful woman who had the ability to entice men to talk more than they should. She had incredible access to military intelligence and passed this on to her contacts in the Confederacy. The research the author found indicated Greenhow passed critical information that changed the outcome of a battle. She was caught and spent almost a year in a Washington prison along with her 10 year old daughter, awaiting charges. I was impressed at the military hearing that she immediately took over control of the hearing and made the army look foolish. She was escorted under white flag to the South in a prisoner exchange. President Davis sent her to England and France as an emissary of the South to those government to try and obtain recognition for the Confederacy, she failed and died in service to the South. The book provided a great deal of information that is less known about the civil war. I wonder today how much information is passed at Washington socialite parties? Rose must have been an interesting lady. If you are a civil war buff or just interested in history and spies, you will enjoy this book.