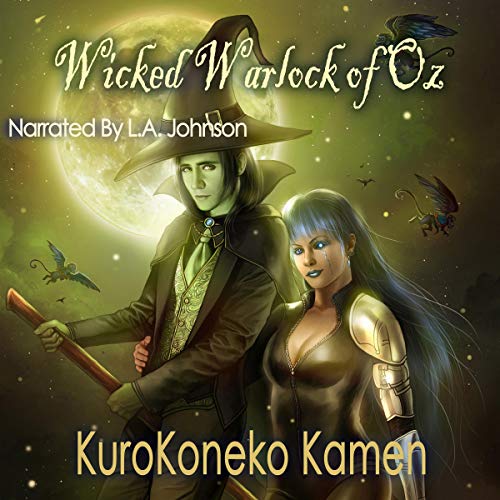 The Wicked Warlock of the West, Jadyn, has a plan to conquer Oz.

Next on his list is to become King of the Trolls. But to do that he has to infiltrate Troll Kingdom and defeat King Belwort’s Champion in the Trolls’ Fighting Competition. Afterwards, he plans on freeing the goblin slaves in the North in order to increase his military might.

Meanwhile, playboy cowboy Theodore Gale is having his own problems. When a giant robot attacks the Emerald City Theo’s mother, Ozlyn, is kidnapped. Theo wants to rescue the Sultry Sorceress of Oz from Dr. Doppelganger's evil clutches before she gets technolyzed, but a robot army stands in his way.

Theodore promises Jadyn to help him win the heart of Tina Woodcutter in exchange for his help. Unfortunately, the cyborg assassin has a cursed artificial heart. If Tina feels emotions like anger or love too strongly her heart will malfunction, and she’ll die. Their love seems doomed. Or is it?

Jadyn comes up with a plan to defeat Dr. Doppelganger that involves tree spirits, and the rescue party travels south towards Dryad Forest. As their adventure unfolds Jadyn keeps crossing things off his World Domination checklist. Is this a mere coincidence, or is Jadyn tired of playing the hero?

Who doesn't love a bit of wicked?

We return to Oz to catch up with Theodore Gale, who is totally loving his favourite Kansas pastimes in the Emerald city, but they are interrupted by an attack from a giant robot which results in the kidnapping of his mother, Ozlyn. Theo persuades The Wicked Wizard of the West to help him with a rescue plan. The story line is varied and interesting with nuggets of earth story parallels. I totally loved these Oz stories; Jaden is the perfect anti-hero, who doesn’t love a bit of Wicked? KuroKoneko Kamen is perfect at setting the scene and allowing the reader to really get to know the characters she really knows how to explore and challenge a stereotype. I voluntarily listened and reviewed an advanced copy of this story. All thoughts and opinions are my own.

Funny and steamy and I loved it! Ace narration

I loved the narration by L A Johnson so much. The characters and the story were brought to life so beautifully. I felt like I was standing in the middle of them throughout the book.

I have not laughed so much in a long time. I just loved this book and its attitude. The characters are fabulous and so well written, they came right out of the headphones for me. Whilst I am aware that I've jumped into the middle of a series I didn't feel at all left out or wanting and thoroughly enjoyed the book. Just watch out for the scene in the tent...it's hilarious! I would be more than happy to spend more time with these characters, in fact I may have to go to the beginning and start the series as I would love to know how they got to where they are in this book. Oh and don't forget the steamy bits!!! And yes I was rooting for 'the villain' the whole way through!

This is not your average fairytale

Loved the narrator! L A Johnson’s voice had me listening and not zoning out at all (which is amazing when family insist in disturbing you!) At first I though this was a tale aimed at young adults, don’t get me wrong I loved the story plot. Then it got a LOT more “adult”. I was sat at the table, being completely ignorant, eating my meal. I suspect my choking was retribution lol.......
I’m actually thinking about going to see the other books by Kurokoneko, especially if Mr Johnson is the narrator.......
Overall a very enjoyable audio book.

Next on his list is to become King of the Trolls. But to do that he has to infiltrate Troll Kingdom and defeat King Belwort’s Champion in the Trolls’ Fighting Competition.
I have not listen to any of the collections so I jump to book 6 still got the storyline with easy
enjoyed the audiobook well written and great narrater

Another fantastic story to the Genderbent world!

Wicked Warlock of Oz (Genderbent Fairytales Collection, Book 6) by KuroKoneko Kamen and narrated by L. A. Johnson is another fantastic adult retelling for the Genderbent world! I highly recommend if you are like me and are not a fan of old school fairytales and enjoy an adult, modern twist to them.

What to expect: The summary always does a wonderful job and without giving too many spoilers away I’ll leave it at magic, friendships, love, teleportation, emerald mines, sex, humor, elves, trolls, princess, demon, Black Swamp village, and plenty more. Good character development and world building.

I love that her stories connect the characters over the course of the series. If you are new to her, you can start with any of the books, although I recommend beginning with the first as the characters will make more sense.

The narrator, L. A. Johnson, was pleasant. As the series continues, the narrations become more polished. 4 ½ stars for this one.

Overall I recommend, it’s an entertaining story sure to keep your interest.

Parental guidance/trigger warnings: This is an adult retelling that contains mature themes. Occasional swearing, violence, death, sex, and like elements.

A fantastically well written story with gender role changes. The author has a wonderful imagination and unique way of telling a fantastic storyline. I definitely enjoyed listening to this audiobook.
The narrator does a fabulous job with the characters and voices of each character. The narrator has just the right tones for each character. I found this story to be a wonderful laugh out loud and I definitely recommend this book.

Once again, we are transported back to the land of Oz and are taken along for the ride as Jadyn begins his quests, but he soon finds himself once again coming to the aid of his friend Theodore. When Theodore comes asking for help Jadyn knows that he cannot refuse his friend and joins Theodore and the rest of his friends on a mission to save Theodore’s mother, but will it cost Jadyn more than his body can handle? Will this be the last quest Jadyn will go on or can they all gather round and give Jadyn what he needs to survive and win?

I enjoyed returning to this world and was happy to see Jadyn get his story told. Theodore and his friends have been relaxing and enjoying themselves and Jadyn has been off doing his own thing when the chaos begins. Theodore’s mother is kidnapped, and he goes to Jadyn for help. The group of friends work hard to make their way to where Theodore’s mother is being held. Each stop brings them closer and with new friends willing to fight alongside them they have a good chance at winning. Their adventure is now not just a rescue mission but a fight for the land of Oz itself. It was nice to see the friendships that have been made and all the interactions between the characters. I enjoyed many of the pop culture references that Theodore uses, they gave me a good chuckle many a times. I really like Jadyn he is so much more than what everyone perceives him to be and his friendship and loyalty know no bounds. Narrator L.A. Johnson continues to bring this world and its characters to life nicely. I was quickly immersed in the story right from the start. The story flows and keeps the listener engaged.

Loved this one! I think it was even better than the first one in the genderbent Oz series. I can’t resist a good antihero story and Jayden totally fits the bill. He’s the villain that just isn’t evil at heart. He has an intriguing back story and no matter how hard he tries to remain closed off he can’t help letting people in. He also can’t stop himself from standing up for what he knows is right. In the end he truly is the hero of the story. He finds a purpose among the misfits and monsters of Oz and even finds love.
As with all the Kamen’s audiobooks the narrator does a great job. Emotions and personalities are clearly expressed and the books are overall fun to listen to.
Can wait to dive into the next one!

Let this warlock steal your heart

Love how the author KuroKoneko continues this great series. I love how she takes a fairytale twist it , so you are hooked till the end . Even though is about the land of OZ , KuroKoneko brings some real life situation in the story . Theo is someone you meet in the other stories. There is a wicked wizard in this one instead of a wicked witch . You will laugh over the beer scenes.
It’s a must listen

I completely fell in love with the wicked warlock! It was great to see him be viewed the way he truly was in the end. I love the major twists in the land of oz and it's characters! I definately recommended it to all adults!

Adult Trip Back To Oz

The author has created an adult bent fairy tail that will draw you in and keep you hanging on. Suspend the need to keep Oz from your memory and enjoy!

This book was an awesome genderbent fairy tale! I will definitely be listening to more from this author!

I love this authors gender bender books, they make the original stories so much better. This is Jadyn's story and let me say it makes so much sense listening to it his side of things. This book does not disappoint as it has plenty of action, adventure, twists and turns that will keep you listening long after you should be in bed! As before with other books in this series the narrator did an excellent job

Listening to Ms Kamen's story is an exciting adventure. She has an imagination that creates vivid characters that have the most exciting, crazy, and numerous quests. Her precise descriptions of the characters allows you to feel that are right next to them even if you may not want to be too close to some of them. Just when you think you know where the story is headed it goes off in a different direction. Jadyn is the villain with no redeeming qualities ,wellll, maybe not. He does love Tina but she has a problem that keeps her from loving him. Theo's father is the master villain. All I can say this story is filled with things that are not what they seem to be. The narrator is quite the storyteller. He does an amazing job. I volunteered to listen to this Audible book and write an honest review. I highly recommend this Audible book for a rollercoaster ride of thrills.