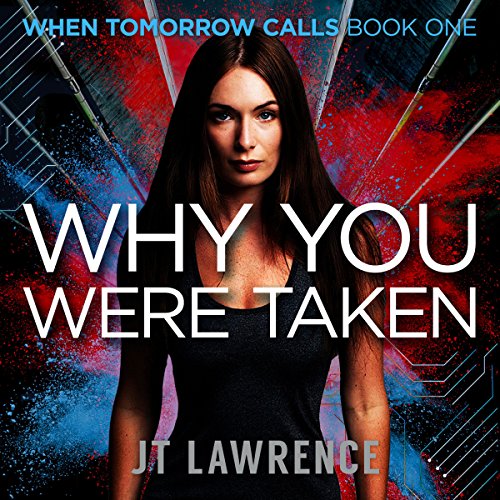 Why You Were Taken

Why You Were Taken

In tomorrow's world prowls a creative and ruthlessly efficient assassin who won't stop until Kirsten is killed.

A troubled woman approaches Kirsten with a warning and a key and is later found dead. Was the woman just another victim of the Suicide Contagion, or is there something more sinister at play? The key leads Kirsten to the Doomsday Vault and a hit list of seven people - and her barcode is on it.

Edgy and original, Why You Were Taken is a dark cinematic thriller that will keep you guessing till the last.

Grab the first audiobook in the futuristic suspense series, When Tomorrow Calls, now.

very good story, kept you guessing till the end, would have given top marks if not for the slow start and 2 chapters that were just sex which had nothing to do with the actual story. would highly recommend for anyone into dark futuristic stories.

narrators performance was spot on, the way she portrayed the the characters made you really feel there emotions.

Set in a near future world plagued with water shortages & epidemic level infertility, a young woman discovers her recently murdered mom could not possibly be her biological mother. Further investigation sets the stage for an adrenaline packed adventure that not only upends her life, but rocks the world.

This is a really well written book, which kept me hooked all the way through. I did guess quite a lot of it, some just based on the title but this didn't detract from the story in the slightest.

Not only is the book really well written it is also really well narrated by Roshina, who has an amazing accent.

The book follows Kirsten in 2021 as she is struggling to get pregnant in South Africa. The story follows everything from her point of view, along with a man called Seth and so we learn things along the way at the same time they do.

I really liked the way the story followed both people, although we don't learn as much about Seth as we do about Kirsten, for reasons that are made apparent towards the end.

Overall this is a brilliant start to the series, but can also be read/listened to as a standalone book as there is a conclusion to it - it doesn't end on a cliff hanger. I'm now off to listen to the next in the series.

Would you listen to Why You Were Taken again? Why?

This book was provided free of charge in exchange for a review.

The book kept you wondering from moment to moment and you never determined ahead of time what would happen. It was a simple read though somewhat confusing with the multiple time lines. Overall the story line held together well and did not disappoint.

I was given this audiobook for free at my request in exchange for an honest review.

I was excited to read this as I'd loved the short story collection Sticky Fingers. It didn't disappoint. Characters were rounded and likeable, story itself intriguing. I loved the idea of thinking in colours. As a huge Stephen King fan I also enjoyed the references throughout (characters reading his books rather than pinched ideas).
As a Brit, I'm usually reading British or American novels so this is a welcome change. Narration totally on the ball too, nothing stilted, no pained accents!

It's hard to say more without spoilers but I'm looking forward to starting book 2.

A gripping story that takes place in two timelines but is easy to follow. The story takes place in south Africa in both the past and the future. There are elements of science fiction, family, trust and murder. Interesting to the very end.

The opposite of nothing

Format : Audiobook )
"The opposite of nothing."
A great disappointment since the initial premise seems to hold out good possibilities, which blur into an apparent overreaction and slightly hysterical silliness towards the ending.
Told in two timelines (1987 and a futuristic 2021), from three individual perspectives, and set in South Africa, the writing is simplistic and easy to read. An attempt to add veracity to the story is made by the earlier time line being presented in the form of a young woman's journal which not only notes her personal experiences but also lists the books she is reading and films, TV programmes and music which are playing at that moment in her life. Interspersed with these chapters are the events occuring seperately in the 'present' year of 2021 to a young man and woman. These latter lives finally draw together as the story gains momentum.

The narrator, Roshina Ratnam, has a pleasant if somewhat little girlie voice which fits well with the writing. Her reading is clear and well modulated with a reasonable vocal patterning for the main protagonists. But it is not enough to make this story anything more than a lightweight mystery thriller

I was fortunate in being gifted a complementary copy of Why You Were Taken by the rights holder, via Audiobook Boom, at my request. My thanks for that. Although quite enjoyable, and with the potential to be a very exciting and original story, for this reader it failed by trying too hard. Such a pity.