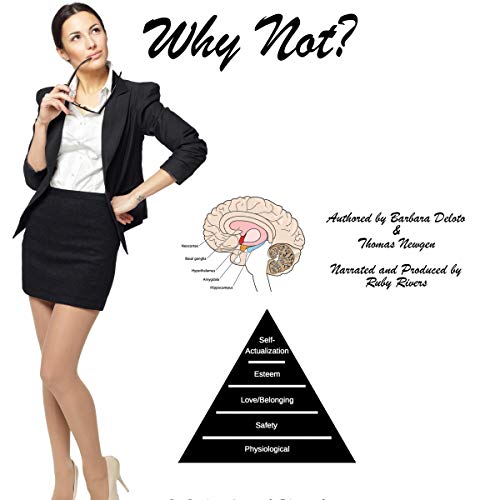 By: Barbara Deloto,Thomas Newgen
Narrated by: Ruby Rivers
Try for £0.00

Male feminization for fun and growth?

Why not? It’s a question that critical thinkers ask about many subjects. Everyday there’s someone who sees something and instead of saying no, they ask, why not? What if the Wright brothers agreed with everyone that man can’t fly? What if Henry Ford believed like everyone else that there could be no mass production? What if Galileo gave up on the idea that the world is round and not flat like the Church wanted him to? If something can be beneficial for you or others, but the accepted societal view says it’s wrong, does that really make it wrong?

Male-to-female crossdressing is one of those things. Cross-dressing is when a male, who identifies as a male, dresses as a female, To genetically born males that identify as females, it isn't cross-dressing at all. It's part of their gender identity. What we speak of here is a genetic male that identifies as a male, cross-dressing as a female. Sometimes viewed as an unmanly due to societal paradigms and beliefs and called a deviant behavior, it’s carried a stigma with it. Does that mean it shouldn’t be done? Women are allowed to cross-dress - why not? It has become commonplace for women to wear men’s styles of clothing, yet men are forced to stay in men’s clothes.

Until open-mindedness is more prevalent, and paradigms and beliefs are changed, it’s still possible to do in secret, or with likeminded people and groups, and the benefits are just as great..

If you, a person close to you, a spouse or partner, or a friend of yours is involved in male-to-female crossdressing, has an interest in it, or is bored and wants to try something new and exciting then drop the veil of illusions by creating a new feminine illusion and thrive. Listen and hear what benefits can follow in this thoughtful guide that just might improve your or someone else’s life - or at least help you understand it better. Heck, Why not?

What listeners say about Why Not?

been there . doing that!

although I had not thought about these issues, I just enjoy power dressing as a woman, it all rings true for me.

Provides a road map for thinking. An outline for a positive and thoughtful way to enjoy cross dressing

Good continent but the reader is horrible

If you crossdress listen to this book

Didn’t really ever think I would figure out why I enjoy crossdressing. But for a few years now my wife has knows and even supports me in the hobby.

The book comes across a lot of points that make since as to why a man would wand to dress like a woman. I know I feel better knowing I’m not alone and there’s nothing wrong with hiding it from the world.

Personally I like to crossdress, as soon As I get home from work I put on a pleated skirt or a sexy pair of denim short shorts. I put on a cute top and knee high socks. I’m not really all into the high hills or makeup thing but I do go to bed in a cute and super soft. I just really like how soft everting is. I now have a dresser and closet full of jr. size clothes that make me feel humble. My wife even helps me by taking me out shopping for new outfits.

Overall I am now more open to the hobby. I have now been crossdressing for over 22 years now with no plan to stop. This book helped me feel in the blanks of why and how. I’m so glad I gave this book a try. It was a mind opener for me...

A different way of thinking

Great straightforward look at the crossdressing world! Love your normal work but I enjoyed this non-fiction as well.

Good (but not Great) for a Beginner!

As a gender identified Male who is interested in this side of Life I find this to be a nice resource for beginners. However, the narrators voice sounds to exaggerated like she is reading erotica, and too fast at that! I purchased other books with her narration and had the same issue even though the content was beneficial. I had to slow down the speed and even then the tone was more meant for erotica then self help which is what this book is.

Student is ready, to express his feminine side

Knowing this, by wearing long hair; wearing makeup, skirt (dress), and high‐heels. Would it interest you to know that each of these at different times in history in different places were associated with masculine strength and stature and thus would not constitute crossdressing.