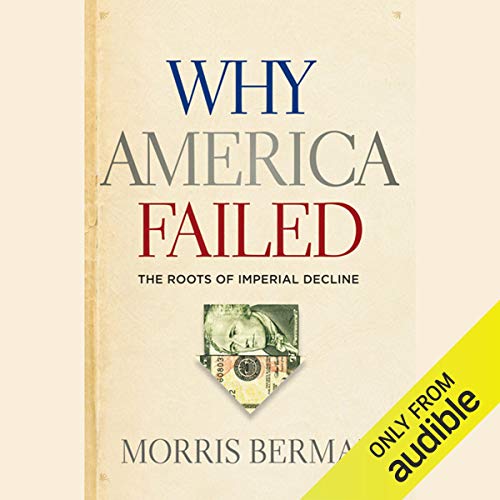 Why America Failed: The Roots of Imperial Decline

Why America Failed: The Roots of Imperial Decline

Why America Failed shows how, from its birth as a nation of "hustlers" to its collapse as an empire, the tools of the country's expansion proved to be the instruments of its demise.

This is the third and most engaging volume of Morris Berman's trilogy on the decline of the American empire. In The Twilight of American Culture, Berman examined the internal factors of that decline, showing that they were identical to those of Rome in its late-empire phase. In Dark Ages America, he explored the external factors - e.g., the fact that both empires were ultimately attacked from the outside - and the relationship between the events of 9/11 and the history of U.S. foreign policy.

In his most ambitious work to date, Berman looks at the "why" of it all. This book:

Why America Failed is a controversial work, one that will shock, anger, and transform its listeners. The book is a stimulating and provocative explanation of how we managed to wind up in our current situation: economically weak, politically passe, socially divided, and culturally adrift. It is a tour de force, a powerful conclusion to Berman's study of American imperial decline.

"Morris Berman is one of our most prescient and important social and cultural critics. He marries a laser-like intelligence with a deep moral core. His writing is as lucid and crisp as it is insightful. His newest book, Why America Failed, rips open the dark and dying carcass of empire. His analysis is sobering and often depressing. But the truth at this stage in the game is depressing, very depressing. Those who refuse to face this truth because it is unpleasant, because it does not inspire happy thoughts or offer false hope, are in flight from the real. The collective retreat into self-delusion has transformed huge swaths of the American populace into a peculiar species of adult-children who live in a Peter Pan world of make believe where reality is never permitted to be animpediment to desire. It is too bad Berman, who sees and writes about all this with a stunning clarity, lives in Mexico. It gets lonely up here." (Chris Hedges, author of Death of the Liberal Class and Empire of Illusion)
"Morris Berman's masterpiece is a brutally honest, wonderfully crafted,exceptionally well-documented treatise on how America was spawned, several hundred years ago, to devour its offspring - financially, socially, and technologically. Why America Failed shines a harsh, unavoidable light upon the cunning business mindset at the core of America's creation, expansion, and devolution. Berman describes with stunning clarity how and why the 'hustler' mentality, upon which our country was predicated, eviscerated alternative moral or social doctrines, and thus incorporated the seeds of our self-destruction from its very inception. This book is as uncomfortable to read as it is impossible to miss." (Nomi Prins, author of It Takes a Pillage and Other People's Money)
"Morris Berman noticed that it's not morning in America anymore. His message may wake up the millions who are oversleeping while the late-day storm clouds gather over this land." (James Howard Kunstler, author of The Long Emergency)

This is one of the most important books of our sad age.
A sombering and entertaining examination of how the US failed, and how those following its example (I'm thinking in particular the UK) are doomed.

An excellent companion to Berman's work is Moby Dick, which is referenced throughout. In both, the pathological pursuit of "progress" is shown to be self-deceiving and, ultimately, suicidal. Echos of Marx and Freud there. And I would consider Berman's work up there with the best of them, in particular Civilization and its Discontents (I believe the original title of this work *was* Capitalism and its Discontents). Though Berman's prose is clearer and more engaging. The chapters on progress and the American South are particular standouts.

The narrator does a fantastic job; and I hope it won't be long before more of Berman's work becomes available here, on Audible. Hopefully also by Bramhall.

Why America Failed: A Luddite's Lament

Nothing: the author's premise that the reason "Why America Failed" is technology and progress is utter nonsense.

A Storm in Flanders

What does Mark Bramhall bring to the story that you wouldn’t experience if you just read the book?

The narrator gave a superb performance, expressing not only the author's thoughts but also his feelings and attitudes

What character would you cut from Why America Failed: The Roots of Imperial Decline?

Not applicable to this book

Morris Berman analysis of the current state of US diagnoses the cause as hustling with which he believes was established by the country's founding. The financial collapse in 2008 provides him with abundant ammunition, and clearly, some criminal intent was present in the credit default swaps and other swindles perpetrated by Goldman-Sachs and other financial institutions. The author, however, lacks the clarity that Matt Taibbi used so effectively in his vastly superior bookGriftopia: A Story of Bankers, Politicians, and the Most Audacious Power Grab in American History. Even before 2008 there indeed problems that have caused wage stagnation and massive accumulation of wealth by a small number of individuals.

Where Berman's argument completely derails, however, is in attributing the underlying cause of endemic swindling to technology and progress. While acknowledging that Unabomber Ted Kaczynski assassinated or maimed several innocent people, Berman's main complaint is that in his manifesto Kaczynski's writing is "sophomoric" and badly in need of an editor. The Anti-Bellum South, Berman asserts, was a truly genteel society that valued contemplation and honor completely unlike the ruthlessly aggressive North that steamrolled over everything in its way. While paying lip service to the fact slavery was abusive and immoral, he seems to discount that fact that it was the exploitation of other human beings that enabled the anti-Bellum Southern gentlemen to pursue a life of relaxed contemplation. Criticism is directed at Abraham Lincoln whom the author notes worked to improve transportation in his state, and thus a force for progress and technology.

The author cites the reading a document on a computer monitor elevates dopamine, cortisol, and causes decreased ability to critically analyze. Worse still is multi-tasking which he believes results in impaired reasoning. In different chapters, Berman bemoans that thousands live alone, then seems to contradict himself by asserting that technology in the form of iPhone and iPads deprives people of solitude. Berman categorically rejects the idea that technology is a tool that can be used or misused: he regards technology and progress as essentially evil.

Not surprisingl, Berman concludes that the US is hopeless and doomed. The problems that current grip the US are serious and may not be corrected in the fullness of time, but not the direct result of technological progress. Nowhere in his screed does Berman mention the bloated military budget, the over-extended imperium with at least 900 known bases in foreign countries and an unknown number of covert sites, a non-functioning congress, and a substandard educational system.

Some truth. And a lot of nonsense.

I can't disagree with many of Morris Berman's assertions.
Yes, moronic, vulgar, violent aspects of U.S. culture abound.
Americans are not exceptional. They are not exempt from human frailty and sin.

But were things better in any of the Good Old Days? During the days of
Berman's "Southern graciousness?" Is progress really an illusion? Not if
you know much history. Not if you have had my experience of working
with young people in K-12 schools. The Net Generation is far smarter and
more compassionate than their elders. Great social progress has been made.

Berman comes across as an "angry old white guy." Not the kind you see on
Fox. The kind found on the academic Left, whose life experience is spent in
academe, dealing with abstractions. The messy concrete realities that make
up the hustle of working life are seen from afar. That is for the "hustlers" Berman disdains.

The author's un-nuanced criticism of technology also expresses an elitist mindset.
Neo-Luddite ranting on "those kids and their gadgets" is another marker of the
angry-old-white-guy syndrome.

Berman hates TV, even likes the Taliban prohibition of satellite dishes in
Afghanistan. I bought his Audible book because I saw him on CSPAN Book TV
promoting his book. Is he going to turn down his cut from those hustlers at Amazon?

Presumably the author does not cross the Mexican border on a burro when he
comes to the U.S. Bet he would prefer the speed and safety of flying Aeromexico,
bristling with avionics technology. Thanks to hustlers like William Boeing, Donald Douglas, et al.

Probably he avails himself of the wonders of the electric grid in Mexico City.
Brought to him by hustlers like Nikola Tesla, Thomas Edison, George Westinghouse.
Berman might have a more positive view of progress if he saw studies showing that
human lifespan is doubled in areas with electricity. Beats "natural living" in Chiapas.

Maybe a high-tech hospital in Mexico City is the preference for medical problems, too.
Hopefully he is drinking purified water, getting vaccinations, eating safe food, and
using modern sewer systems--brought to us by technology hustlers.

"Why America Failed: The Roots of Imperial Decline" has plenty of cogent points and
is done by that rarity of academe: a good writer. But it is unbalanced. And hypocritical.
University age students, and others without much life experience, are likely to buy into it
uncritically. To do so is to buy into nihilistic hopelessness.


3 of 5 people found this review helpful

For all of you trying to see through the fog of American culture, here is the lens and the candle. Not a happy book, more like 'the truth hurts' but Berman certainly covers all the bases. Unexpected coverage of the Civil War proved fascinating and salient as well.