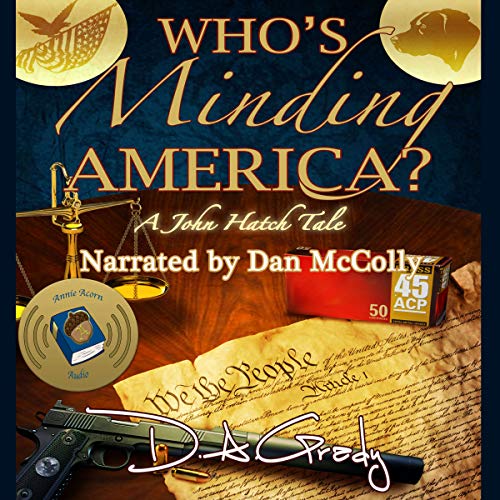 By: D. A. Grady
Narrated by: Daniel McColly

Annie Acorn Publishing is pleased to present Who's Minding America?: A John Hatch Tale written by D.A. Grady and narrated by Dan McColly.

Enter internationally beloved From Gents' Pens' author D.A. Grady. Drawing upon his own military background, corporate insider knowledge, broadcasting expertise, and outdoorsman skills, D.A. spins a complex web of international intrigue, crooked politicians, misplaced loyalties, high-tech espionage, and cutting-edge weaponry that is all the more frightening because not only is it possible, it is probable. Within this first full-length novel in the John Hatch Tales series, the author skillfully unveils a twisted plot to set aside the Second Amendment and take over America.

Following a horrific event he has witnessed live on national television, famed outdoorsman John Hatch reaches out to Citizens Against Guns' leader, Gray Grayson. Both men soon realize that gun control is merely a symptom of a greater problem, as they join forces to save an America that is clearly floundering on the brink of destruction. A flick of a switch or a squeeze of a trigger can thwart all of their efforts as they travel the globe in a race against time, engaging with a variety of circumstances, forces, politics, and clandestine figures that hold both the country and the listener in their tightening grasp, until the final words of this first entry in the John Hatch saga.

Can a small group of everyday citizens save America, indeed the world, as we know it? You won't want to miss this one!

What listeners say about Who's Minding America?: A John Hatch Tale

Tell no one, trust no one.

The ongoing right between those determined to maintain an American's right to bear arms versus those who want the imposition of gun control, morphs into the even greater conspiracy to seize the United States itself. As bombs explode, crowds are shot down and mind control enters into the story, only one man, renowned hunter John Hatch, and a small handful of friends emerge slowly to try to save everything. A conspiracy story of truly epic bounderies, this political, cum military, cum gun toting thriller barely has a chance to draw breath between these explosive scenarios. It is chilling, it is obscenely dark and worrying and worst of all, actually seems mostly plahsible. As a Brit, I found this a difficult book to get into at first - the seeming hysteria of large parts of America over their rights to go around carrying guns not just for hunting but for 'prosecution' against others as keen to preserve the same rights, does seem to us mostly as truly ridiculous, indicating an enormous lack of faith in their peacekeepers and government and insecurity of the individuals themselves. This difficulty was further enhanced by the narration by Daniel McColly, which was soft but fast paced and, though my ear adapted later, was initially hard to follow. However, the story was well written, the arguments well rehearsed and the whole rich in the unexpected. My thanks to the rights holder of Who's Minding America, who, at my request, freely gifted me with a complimentary copy, via Audiobook Boom. It really is a remarkable thriller. However, my failure to even be able to take the gun lobby seriously somewhat dented my enjoyment of this story, leaving the deeper implications which would have been more closely aligned to my personal misgivings, mostly untouched. Not a book I'd recommend to Brit readers unless they, too, seem to have fallen into that firearms for everyone pit of despair.

Almost 2 stories one suddenly ends and another begins, but it wasn't a fluid transition.

This was a good book.It was a thriller with some romance tossed in.A compromise is in the works for the gun debate,something both sides can agree to work on.Someone out there wants to ramp up the carnage to stir irrational fears. A terrifying premise for the world we live in now.What IF the things in this book were true? Daniel McColly was a fine narrator. I was given this book by the narrator,author or publisher free for an honest review.