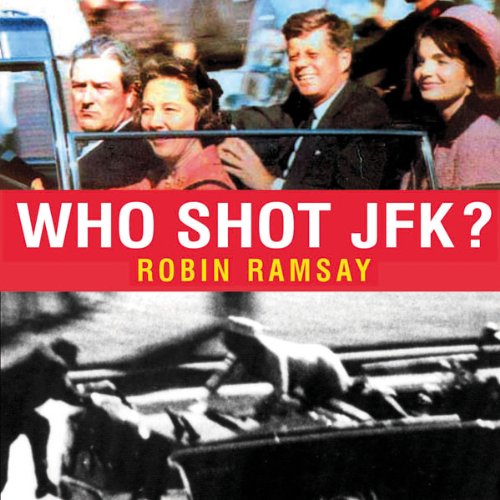 The John F Kennedy Assassination Conspiracy, The Mafia, Zapruda Film and What They Don't Want You to Know

After nearly 1000 books, half a dozen journals, two official inquiries, several million pages of declassified documents, dozens of TV documentaries and hundreds of Websites, is there anything left to say about the assassination of President John F Kennedy? Hell, yes.

The Kennedy assassination remains both the greatest whodunit of the post-World War Two era and the best route into recent American history. In this short book, taking it as proved that Lee Harvey Oswald was indeed the patsy he claimed to be before he was murdered, Robin Ramsay looks at the assassination through the work of the researchers who refused to buy the official cover-up story that Lee Harvey Oswald was the assassin.

What listeners say about Who Shot JFK?

This is fantastic review of all the JFK research and is presented in a very entertaining and straight-forward manner. The reader keeps the information organized, smooth, and in an easy flowing manner.

Its presented in a balanced approach and never rambles off to far, letting the listener make up their own mind about the facts and the non-facts of this never ending story.

The information was interesting. A lot of theories, ideas, and suggestions were addressed. The way the material was presented was a little tedious and tiresome. Each dot-com address was read aloud in its entirety. And there were hundreds! This is more like a reference book of where to find the many theories out there. This book could have easily have been cut in half. Just give us the information, and don't include the footnotes in the audio performance. The narrator was excellent. He was enthusiastic, spoke clearly, and made the experience fun. Good job!

Maybe it's the way the reader reads this very short tome, but it sounds like another crackpot attempt to accuse and explain whodunit. The LBJ angle is not news, but the author attacks the idea with lots of research. Some of it conflicts with what is already known and accepted, such as the late Charles Harrelson's alleged involvement in the plot. I got the ebook from Books on Board to follow up on the footnotes. This is an unabridged edition so reading the footnotes is essential because they are included in the paragraphs. I gave it 4 stars because it is a fun read, if you don't take it too seriously.

...So far, but do we really need to hear ALL the footnotes read aloud? It's really distracting, especially when spoken by a John Cleese sound-alike.

Need Hard copy of Book for audio to help you any..

About every other sentence was a reference to the bibliography of where to look for more information. Sorry audible, this is one you need to buy the hard copy of.