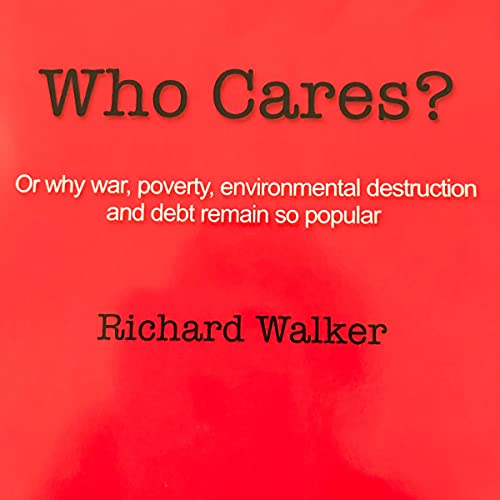 Hi, I’m Richard Walker, and I wrote Who Cares? A decade ago. The climate crisis and the financial crisis of 2008 were the main motivators for me. Now in 2021, we are still hurtling toward a climate disaster, despite more than 30 years of dire warnings. And we’ve been devastated by a virus even though scientists have been warning governments for the past 40 years. One early warning came from a Nobel Prize winner. Joshua Lederberg he said: “The single biggest threat to man’s continued dominance on the planet is the virus.” We knew what was going to happen. So why didn’t we get to work on the problem? Well the scientists said that there was a complete lack of political will. Why was that?

"Who Cares? evolved out of a passionate desire to understand why after 100,000 years of human development and 5000 years of civilization we still make war, accept poverty, trash our living space and owe so much money. So far the book has been very well received. The environmentalist, Jonathon Porritt described the book as “a great read. Pithy, well-researched, iconoclastic."

Comedian and author, Alexei Sayle called it “powerful and passionate”. Internationally renowned economist, Bernard Lietaer simply said, “He is right.” And comedian and writer Jo Brand said, “This neat little book, small as it is - says it all.”

Human societies have often been the cause of their own destruction. With hindsight it is easy to see that they could quite easily have made better choices. Sadly we are less able to sensibly review our own situation.

We are now the cause of all the major problems that we face. The solution is obviously in our hands. We do not need more or better technology we simply need the political will to apply what we have. Who Cares? presents the clearest possible description of just what is preventing us from finding that political will.

What listeners say about Who Cares?

“Who Cares” clearly sets out with a wealth of corroborating evidence the path that has lead the West to the destructive economics of the present day where investment bankers control the money and dictate to governments what wars they should fight and where tax payers money should be spent in order to benefit the large corporations at the expense of the people. Thank you, Richard, for pointing this out. As Chomsky rightly points out, it is socialism for the rich and capitalism for the poor. In the UK, the hope was that when we finally had full democracy, nearly 100 years ago, the people would vote for a more equitable society, but as far as economics go, since 1980, they have voted against their own interests. Perhaps this book, and others like it, will have some effect, but at present, there is little hope of that.

Told by the author himself, this is a captivating listen. Walker explains how and why global finance works the way it does and how it has done for so long. But it’s the way he explains it that makes it so compelling (and worrying).

What’s so skilful about this book is that he not only backs up his arguments with research taken from experts in the field of economics, but educates the reader in way that makes it understandable to the lay person.