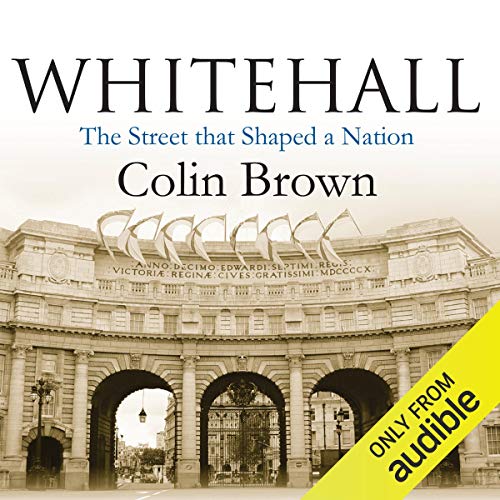 By: Colin Brown
Narrated by: John Telfer
Try for £0.00

No other street in Britain contains more landmarks to our island’s history than Whitehall. Here, we visit what was the most notorious address in London when Byron and Lady Caroline Lamb conducted their very public and tempestuous love affair; the Admiralty, where Nelson received his orders to attack the French; and fragments of the tennis courts where Anne Boleyn watched Henry VIII playing tennis. We witness documents that show how Churchill, in 1940, prepared for street fighting in Whitehall’s departments. Whitehall tells the story of our island race, its empire, its conquests and its decline, encapsulated in one small corner of the capital.

What listeners say about Whitehall

Great premise for a book, but poor execution. Sometimes it was hard to tell whether it was the author or the narrator what lets it down - was it the sneering tone of voice or the sneering words? For a history of Whitehall to spend so much time on John Prescott's affair with his diary secretary is cheap and lazy. And the author had obviously just read Chris Mullins' diaries as he pulls segments out of those (I'm sure Chris Mullins would admit that his contribution to goings on in Whitehall doesn't deserve mention in the historu books). But despite all that it wasn't all bad - there were some interesting sections and if you can avoid concentrating on how superior it sounds its probably worth a listen.... just about.

Finding out about was on this street before and what has happened in some of the buildings that are there now.

What other book might you compare Whitehall to, and why?

I don't know anything to compare it to.

To serious to be moved.

A nice history through the centuries that this road has been here.

One of the most fantastic audiobooks I have ever listened to. Just packed with wonderful historical, architectural and anecdotal detail - did not want it to end.

very good (if you use computer to find pics)

This book will be of interest to anyone living or working in London, or tourists with a serious interest in history, art and architecture. It is full of anecdotes about the various characters who frequented Whitehall from Wolsey to present day politicians and it held my interest throughout. But I don't think I would have finished the book if I hadn't had a computer nearby all the time so I could find illustrations or photographs of the buildings. It's really hard to visualise the rabbit warren of rooms in the Tudor establishment and the changes which were made to them. Same for discussion of sculptures and architectural changes over the years. Frustrating, too, that so much of what the author writes about is not open to the public - fair enough, it's the seat of government, but there are loads of treasures we will never see. The book was well read, but is Georgiana (Duchess of Devonshire) really pronounced George-ay-na?