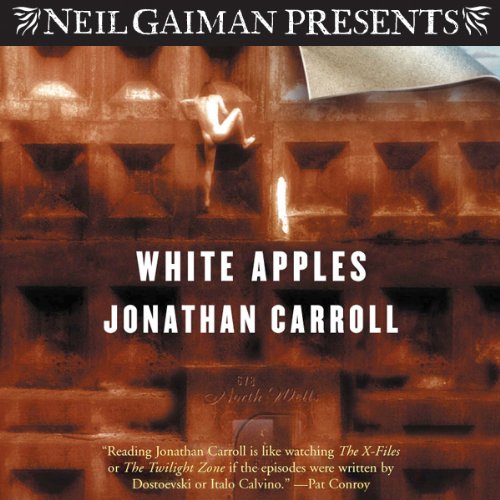 Award-winning author, narrator, and screenwriter Neil Gaiman personally selected this book, and, using the tools of the Audiobook Creation Exchange (ACX), worked with the book's author to cast the narrator and produced this work for his audiobook label, Neil Gaiman Presents.

A few words from Neil on White Apples: "In his performance, Victor Bevine manages to convey three aspects of Vincent’s personality: the womanizing hedonist he was in life, the now-dead fellow trying to control his rising panic who realizes his one-night-stand knows today is his mother’s birthday; and, ultimately, the loving, heroic family man who undertakes a big task for the sake of his unborn son and - incidentally - the rest of humanity. That’s a tall order for any narrator, but I wasn’t surprised when the accomplished actor Victor Bevine made the character come alive.”

Vincent Ettrich, a genial philanderer, discovers he has died and come back to life, but he has no idea why, or what the experience was like. Gradually, he discovers he was brought back by his true love, Isabelle, because she is pregnant with their child - a child who, if raised correctly, will play a crucial role in saving the universe.

But to be brought up right, the child must learn what Vincent learned on the other side - if only Vincent can remember it. On a father’s love and struggle may depend the future of everything that is.

By turns quirky, romantic, awesome, and irresistible, White Apples is a tale of love, fatherhood, death, and life that will leave you seeing the world with new eyes.

To hear more from Neil Gaiman on White Apples, click here, or listen to the introduction at the beginning of the book itself.

What listeners say about White Apples

Thank you Neil!!! Carroll is my new favorite.

If you could sum up White Apples in three words, what would they be?

What was one of the most memorable moments of White Apples?

The entire concept of being dead while being alive.

Which character – as performed by Victor Bevine – was your favorite?

Yes, but unfortunately that is impossible for me, but I couldn't wait to get in my car to and from work.

If you enjoy Murakami, Gaiman, Mieville, or Scalzi you might as well go ahead and get this one. I listened to Land of Laughs first and enjoyed it so much I immediately went for White Apples. I feared it wouldn't live up to "LOL" but it was just as fun to listen too.

In one word: "Delicious"

I like White Apples for the same reason I like Neil Gaiman's own writing. It's strange and interesting. Like the nightmare that you kind of, almost don't want to wake up from. Victor Bevine was the perfect choice for a narrator. His voice, and the beauty of Jonathan Carroll's language, and the fascinating character driven story... just... delicious.

What made the experience of listening to White Apples the most enjoyable?

Victor Bevine is extraordinary. He lights up the beautiful text with his voice and seamless transitions. They could have a spell it read this book and I'd still cry, the story is that interesting. But the marriage of Carrol and Bevine makes this book less of a story and more of an experience.

I doubt they could do this book justice, but if Tarsem or Fincher gave it a shot it would be something like: How far would you go for love?

Thought provoking but too long and drawn out

I would recommend but with caution. It was pretty long and drawn out and though artfully written it was like treading through a dream. Some parts seemed disconnected. With that said, however, there were some incredibly thought provoking parts....particularly in the beginning with the ideas that the main character is dead - and how does he really know he is no longer here.

The most interesting was the idea of the strory was the mosiac and the role of chaos with respect to the mosaic. This was amazing and outstanding!! It definitely changes your view of life after death - or rather what comes after the end. Forever changed my view of chaos and the role it plays in life (or afterlife) if one ascribes to it!

Which character – as performed by Victor Bevine – was your favorite?

Favorite character by Victor Bevine was Isabelle - and her amazing, flawless accent.

Could you see White Apples being made into a movie or a TV series? Who should the stars be?

It did remind me some of What Dreams May Come. Scarlett Johansen for Isabelle and Jude Law for Vincent

The credit was worth it for the accent, the mosiac and the chaos!

I loved and hated this book

I really had troubles arriving to the end. I really dislike the character of Isabelle, and the fake Austrian accent did not help at all.
the story is great, but sometimes too much romance (cheap romance I must say)!

Would you try another book from Jonathan Carroll and/or Victor Bevine?

No. The beginning of this book is so inane and idiotic in its description of the main character's flirting with women that by the time things started happening beyond the flirting I just couldn't tolerate it. I get this character is a philandering would be lothario but present him in an interesting way at least. The writing felt amateurish and bordered on the edge of Danielle Steele-ishness. If you're into poorly written stories about possibly dead, debatably debonaire douche bags then I guess this one might be for you. But NG, you let us down with this one. You can't win 'em all.

Probably not something from the Gaiman collection.

Who would you have cast as narrator instead of Victor Bevine?

No one. This book should have remained un narrated and lost in the graveyards of used bookstores' bargain bins.

Beautiful, touching, funny, and unprecedented in it's creativity. I've never read anything like it. Thank you Neil Gaiman for sharing this.

Interesting at times, but not a strong book

Would you try another book from Jonathan Carroll and/or Victor Bevine?

Possibly. The story was interesting and different, and in different hands it might have worked better. It's not hard to imagine Steven King writing this book, and it would have benefited from King's ability to build believable characters who really sound like regular people.

The 'mosaic' explanation of God is fascinating. The characters were, unfortunately, the least interesting aspects of the book. Carroll told us things about them, rather than showing us. Vincent was a great father. Vincent was a master marketer. Vincent had great penmanship. But there was precious little evidence for any of this. In particular the rather far-fetched claim that he was a great father--in fact, he walked out on his family for his Great Love of another woman, and only interacts with his family in one brief scene (his son does appear, much later, to make the statement, "My father was a great guy." Really? Not as far as I could tell, but if Carroll says so.) He and Isabelle seemed a collection of quirky behaviors and syrupy romantic interludes, not fully formed characters. Carroll doesn't help make these characters any more real by referring to them by their full names again and again, right through the end of the book, perhaps in case you forgot which Bruno he was talking about. One other quirk of writing that made the book less enjoyable for me is Carroll's tendency to start sentences with "ing" verbs. "Lifting his head up, he saw Bruno." "Reaching into her bag, she took out her gum." Once you notice that writing tic, it's hard to stop waiting for the next one, which won't be long in coming, since every third sentence starts this way.

The narration was very good. Bevine handled the Austrian accents well and without caricature.

Did White Apples inspire you to do anything?

Unfortunately, it inspired me to be more careful in following Neil Gaiman's recommendations. Viriconium, another recommendation from Gaiman, was hard to get through. I love Gaiman's writing so was hoping for more.

I found this book to be philosophically resonant in a manner that I was certainly not expecting from the genre. There is a story, yes, but the elements that really stayed with me when I finished were not plot based but thematic. Life and death and everything in between.

.I ordered this from the Neil Gaiman present's section, thinking as much as I enjoy his stories I might like one he likes himself. Not disappointed at all, except that I want more. This was a unique and fun story. I found myself listening to parts over again because of the details. I hated the way the book ended. It was kind of left up to your own imagination to figure out how things might happen, but it was ended so that there could be more story. I immediately began to look for a book 2. I thought the narration was superbly done, and will definitely look to get more from the author and the narrator both.