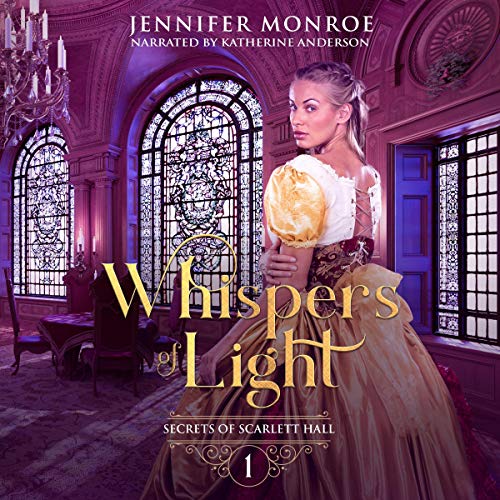 By: Jennifer Monroe
Narrated by: Katherine Anderson
Try for £0.00

For 150 years, the magnificent Scarlett Hall has stood proud. However, the secrets it holds threaten to destroy it and the family living within.

At the age of 21, widow Isabel Barnet has returned to seek refuge in her family’s ancestral home of Scarlett Hall. Having experienced heartbreak and vowing to never love again, Isabel has now resigned herself to minding her younger sisters and forever remaining alone. That is, until one day when her mother makes a request.

Laurence Redbrook, Duke of Ludlow, feels half a man compared to others. The limp he received after a tragic accident is proof of that. Understanding that the ton whispers behind his back - and no woman would ever view him with interest - he remains alone at his estate. That is, until an important letter arrives requesting his aid.

As Isabel and Laurence are joined into a marriage of convenience, Isabel begins to search for a way to escape from both a man she does not love and the secrets in her heart that threaten to destroy her. And Laurence must decide if the love he feels for Isabel is enough for her to see him as the man he wishes to be rather than the burden she is forced to carry.

Whispers of Light is the exciting first book in the new Secret of Scarlett Hall series. Each novel is filled with mystery and secrets that will keep you guessing as you listen to find out if this hero and heroine receive their happily ever after.

What listeners say about Whispers of Light

I really enjoyed listening to this book. It took a while for the romance to build but when it did it was sweet. I enjoyed watching the pair develop their friendship and then progress to love. It was a slow burn but very enjoyable. I'm looking forward to the test of the series.

I voluntarily reviewed a review copy.

This was a nice enough clean romance. I am very sceptical of historical romances as I like them to be accurate and there are often way too many authors with limited knowledge this time period. This author did a good enough job, and the story was pleasant. As someone whose English accent is sometimes called very correct/posh, I found the narrators accent too posh and annoying at times.

All in all it was a nice story to listen to but it didn’t have me gripped.

A sweet Regency with a touch of secrets. Fun to listen to. I loved the narration.

“Whispers of Light” Secrets of Scarlett Hall, book 1 by Jennifer Monroe narrated by Katherine Anderson
I requested and received a copy of this audiobook from the narrator. And, I do feel so very lucky as this story was a captivating read. A story that shows how much our perceptions and experiences impact how we react in our here-and-now world. Note: the last minute leaves you with a teaser to the next book in the series, which at first put me off, but I got over it. Because Laurence & Isabel’s story was worth the read. Happy Reading ! !

I titled this review "strangely unputdownable" because the book really is... Nothing much happens in the story: Isabel is forced by her mother to marry Laurence who, on his part, agrees to the marriage because he believes he won't be able to marry anyone else otherwise... and he wants to save Isabel's family from being evicted from their own house... Each character hides secrets, but these are not "real" secrets or mysteries - no past murdres, no crimes, nothing of the kind - they are more burdens of traumas that they carry; there's no real villain, there are no unexpected twists, no runs and chases... and yet when you start listening you can't put it down. Maybe it's because of the slow pace of the story which allows us to get to know the two main characters so well, maybe because this lack of hurry means we do see how the relationship between the two main characters develops, how it slowly changes from friendship and gratitude into love. I am not sure all the reactions are psychologically believable (like is it possible to have a complete change of character overnight...?), but they somehow work in the story. So yes, the book IS strangely unputdownable...:)

The narration is really good. Ms Anderson reads well all the parts, male and female, and all the changes in the mood, in the emotional state of the characters are obvious and ring true. It's a really good interpretation of the story.

I think the biggest issue I had with this story was the overuse of the adverb “However.” I don’t know how many times it was used, but I swear had I been able to see the physical book, the pages, I’m sure it was used several times per page. When it comes to adverbs, I think only sometimes are they needed; it depends on what’s being said. See, even if that previous sentence, I couldn’t stop from including an adverb (sometimes). Still, many of the sentences that used however in the story could have easily been rewritten to forgo its use. Overall, the story was pretty good.

Did anyone else feel the model for the cover doesn't work? I don't know if it's her hairstyle or expression or what, but no.

I thought the narrator did a great job! I’m always a fan of the English/British accent, so no complaints there.

I thought it strange that considering Isabel’s mother didn’t want to force her daughter to marry Lawrence, and knew that she didn’t want to remarry, that she wouldn’t have spoken to her more about the situation beforehand. I wondered why Isabel's mother never thought of having one of Isabel's sisters marry Lawrence. It's not like that wasn't common back then.

Not surprisingly I couldn’t stand Harriet. For some reason as soon as I heard her name, I knew she was going to be an unlikable character. Even if Lawrence felt it was his fault his parent’s died, the fact he let Harriet talk down and cruelly to him in front of others made no sense to me. He was always worried about people thinking less of him and, obviously, her personality wouldn’t have helped.

With the “however” issue as mentioned above, Isabel constantly talking about losing her heart off to Lawrence (or something similarly worded), it was overdone. Then at the end when she tells Lawrence that she was in love with him. Huh? I could have seen her saying she cared greatly for him, wasn’t sure if it was love, but still not wanting to admit her feelings for him. There was nothing like that though.

When Lawrence asked Isabel if she liked his sister, I get that she wanted to make things easier for Lawrence but, at the same time, why did Isabel feel she had to overdo it, saying that she’d missed Harriet when it was time for her leave?

I wasn’t a fan of how long it took to reveal why Lawrence blamed himself for his parents’ death. And leaving the reader to believe that Isabel loved her husband throughout their marriage, only to be told she hadn’t prior to his death, sort of threw the story off for me and left me wondering why she acted as though her not wanting to express her feelings to Lawrence (not that she ever showed anything relating to love) was because of her love for her dead husband.


I received a free audiobook copy in exchange for an honest review.

I received a free copy of this audiobook with a promise to submit a review.
This was a regency piece in every regard without the voyeurism. Isabelle Lambert had her share of sorrow in her young life and was forced into a marriage of convenience by her widowed mother. A story of a strong man who didn’t fit the typical role of Duke and even stronger women. The first in the series a second book is eluded to in the epilogue. The narration was well done.

This is a pleasant Regency novel about a family that has come upon hard times in the 1800's. I enjoyed the story. There wasn't anything original about it, but it wasn't terrible either. The narrator was fantastic.

I enjoyed the story all be it somewhat tame and predictable. The story line between Isabel and Lawrence was sweet and the sour side of Harriet just seemed to add to the plot. I think my favorite parts of the story was when Isabel blew up at Harriet and when Harriet came groveling back to Lawrence and apologized to Isabel after her husband "opened" her eyes as to how she really was!
I was given this free copy audiobook at my request and have voluntarily left this review.

Overall, I liked the story and I am more at 3.5 stars. But, to me, it just seemed like it took a long time to get where it ultimately ended up. I did not find the actions of Harriet, MC Laurence Redbrook's sister, to be absolutely convincing. I also thought that the ultimate reveal regarding MC Isabel's marriage was odd given her behavior up to that point. And finally, it just seemed that MC Laurence was a bit to saintly at times - accepting of both his sister Harriet's and his wife's MC Isabel's behavior.

The narrator, Katherine Anderson, has a pleasant voice with a slight British accent. She did a nice job.