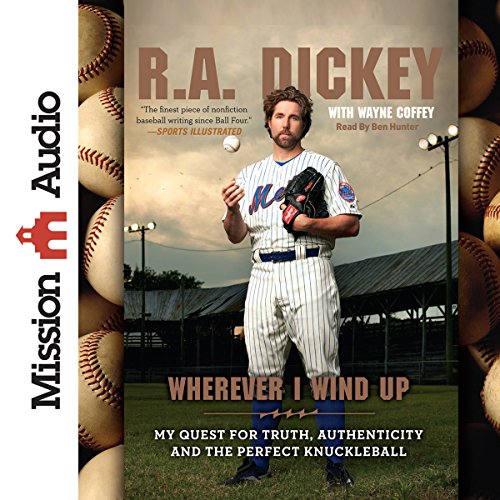 Wherever I Wind Up

By: R. A. Dickey, Wayne Coffey
Narrated by: Ben Hunter

The Glass Castle meets Ball Four as Mets knuckleballer R. A. Dickey weaves searing honesty and baseball insight in this memoir about his unlikely journey to the big leagues.

An English Lit major at the University of Tennessee, Dickey is as articulate and thoughtful as any professional athlete in any sport - and proves it page after page, as he provides fresh and honest insight into baseball and a career unlike any other. Fourteen years ago, Dickey was a heralded No. 1 draft choice of the Texas Rangers, only to have an $810,000 signing bonus, and his lifelong dream, ripped away by an X- ray - and the discovery that he did not have an ulna collateral ligament in his right elbow. Five years ago, he gave up a record six home runs in three innings to the Detroit Tigers - and was effectively consigned to the baseball scrap heap.

Sustained by his profound Christian faith, the love of his wife and children, and a relentless quest for self-awareness and authenticity, the immensely likable Dickey details his transformation from a reckless, risk-taking loner to a grounded, life-affirming big leaguer. He emerged as one of the premier pitchers in the National League in 2010-and the knuckleballing embodiment of the wonders that perseverance and human wisdom can produce. Dickey views his story as one of redemption. Readers will come to see it as something more - a uniquely American story of beating back demons, listening to your heart, and overcoming extraordinary odds.

What listeners say about Wherever I Wind Up

Marred (for me) by unfortunate performance issues

As many have already observed in reviews of both the audiobook and print versions of this work, R. A. Dickey has a compelling story to tell. It is a classic yet personal story of struggle and redemption, and it works equally well as a sports memoir, as a tale of perseverance triumphing over adversity, and as a story about the sustaining value of faith in modern life. "Wherever I Wind Up ..." (and, believe it or not, I just now noticed the pun in the title) is a well-told story, rich with detail, some of which must have been incredibly hard for the author to relive. I applaud him for baring so much of his soul to tell this story. It is a feel-good story in the end, but it passes through some pretty dark territory along the way, so when you do arrive at the end, the positive outlook you feel seems well earned and genuine.

So what's my problem?

I am one of those many New Yorkers who followed Mr. Dickey's rise as a member of the New York Mets, and am familiar with (at least) the baseball parts of his story because I've heard a good deal of it out of his own mouth. It turns out that, in addition to being a good and literate writer (along with Wayne Coffey, who I'm sure had a lot to do with putting a little professional polish on his words), it turns out that Robert Alan Dickey is also very well-spoken in person. He gives a good and thoughtful interview; he speaks thoughtfully and usually quite eloquently on any number of subjects. And I've seen him interviewed many times -- in the locker room after games, on national talk shows, in the documentary film that (in part) covers his life and craft; I even had an opportunity to meet him in person for a few minutes once.

This is great, but it also makes for quite a conundrum, I would imagine, for those who would produce an audio version of this book. Here we have an autobiography written by a reasonably well known person, whose voice and speaking style some of us have come to know pretty well, being read by a third party, Ben Hunter. I do not know Mr. Hunter and I'm sure he's quite professional, but anyone taking on a project like this starts with the deck stacked against him, simply because he is not R. A. Dickey. Here is a very personal story, being read to us in the first person, speaking in often very intimate terms of both moments of personal despair and personal triumph, telling in some cases stories some of us have heard before, except that the voice saying "I did this" and "I felt that" is not the voice of R. A. Dickey. That by itself is off-putting enough, albeit unavoidable (presumably, Mr. Dickey himself was either not available to record this or just wasn't a natural enough reader to produce a quality product).

What was NOT unavoidable, however, and what took me seriously out of the moment on a number of occasions, was apparently shoddy research on the part of the producers of the audio version of this book. The least one can do, I would think, in order to not continually remind us that the person reading this book is an "impostor" of sorts, would be to learn how to correctly pronounce the names of people and places referenced in the work. Surely the "real" R. A. Dickey knows that one-time Mets outfielder (now San Francisco Giants outfielder and All-Star) Angel Pagan uses the English pronunciation of his given name and the Spanish pronunciation of his surname (AIN-jel pa-GAN, not an-HEL pa-GAN), or that Dickey's most frequent battery mate, catcher Josh Thole, pronounces his last name "TOLE-ee," not "TOLE." That fact that the person reading this book aloud does NOT know these things makes it ever more abundantly clear that he is not R. A. Dickey.

These may seem like small things (there are a few others as well), but every time Mr. Hunter mispronounced one of these names, it immediately took me out of the moment and reminded me that I was listening to someone else telling R. A. Dickey's story but using the word "I."

Again, I realize that to some this might seem like a nitpick, and perhaps it is, but anyone who has followed R. A. Dickey's career closely enough to know the names of the other players he plays with -- or indeed anyone who is a baseball fan in New York, San Francisco, and (now) Toronto (where Dickey and Thole now play) is going to have the same reaction, I think, and it's a shame because it could have been so easily avoided.

So yes, I love the story, and yes, overall it's still a good listen. But I think the people who made the audio version of this book should have paid more attention to detail. These things matter, especially when you're using the word "I" and pretending to be a public figure. You can't have your narrator try to sound like R. A. Dickey, I guess -- that would be hokey -- but the least you can do is try to learn his vocabulary (including proper nouns). Otherwise, it's off-putting and embarrassing.

An Awesome Example of Perseverance

Wherever I Wind Up was so much more than a story about baseball, it was about a guy who faced challenge after challenge and never gave up. Dickey has an amazing ability tell a story, and keep every minute of the book intriguing. I never wanted to shut it off, and spent way too many minutes sitting in a parking lot, not wanting to go into the office, or store, or my house until a chapter ended.

The core part of his story is about a guy who overcame amazing odds to play professional baseball, and even as a "good" minor leaguer it looked like he'd never really make it in the big league. Most fans of baseball know that not only did he make it to the big leagues late in his career, he actually defied all odds and won the Cy Young award in 2012 as a 37-year-old, knuckleball pitcher.

I highly recommend this book. It never gets dull or boring. It's a real-life story about an underdog who worked relentlessly, never gave up, and finally reaped the rewards of his labor. Being a baseball fan is not a prerequisite to enjoying this book. I'm telling all my friends they need to "read" this book.

The narrator did a very nice job, but the ultimate would be to have Dickey read it himself.

Solid book of baseball and Faith

This is truly an emotional book. RA Dickey opens up about his sexual abuse as a child his struggles with his marriage and Faith. My only dislike was the performance of the reader. Not terrible but lacked emotion for such a powerful book.

Blessed by reading this!

What an incredible story, and all this before he won the Cy Young. I enjoyed every single minute of this book.

Great everything..very compelling. Listened to it for the 3rd time now.. and its just as great everytime

Excellent! Really glad that I listened to this. RA has an amazing story & he is a great guy that has been through an awful lot.

What an inspiration. Thank you for such a wonderful book and excellent narration. Just loved it

A great underdog story for any baseball fan

I was holding off on listening to this book because Dickey didn't narrate it himself. However, Ben Hunter did a great job with it. He actually reminded me of R.A. a bit. I had to knock him down a star for mispronouncing a number of player names throughout the course of the work, though.

The book was great. It was certainly geared toward fans of the game. As a Mets fan, I was hooked early; but any baseball fan that enjoys a good underdog story would enjoy this title. It is one of the better stories in modern baseball, and hearing the full life story in complete detail really paints a more incredible picture than the listener bargained for.

You could tell that R.A. isn't a professional writer at certain times. He overuses hyperbole, often stating that an event or moment was "the most (fill in the blanks) of my life". However, the story more than makes up for that.

Pick this one up; it's a great listen.

not your ordinary baseball memoir

Would you listen to Wherever I Wind Up again? Why?

Definitely. Dickey's story is moving and honest. He allows you to experience his joys and his darkest pain along with him. Each listen provides a different lesson.

The subtitle of the book is "My Quest for Truth, Authenticity and the Perfect Knuckleball" and his authenticity is commendable. He never glosses over things to paint himself in the best light, he puts it out there as a real experience in his life and illustrates how he's grown from it.

A very good story, made me happy.

I really found this book to be entertaining and inspiring. Specially since he now is an accomplished major league pitcher and won de NL Cy Young in 2012.