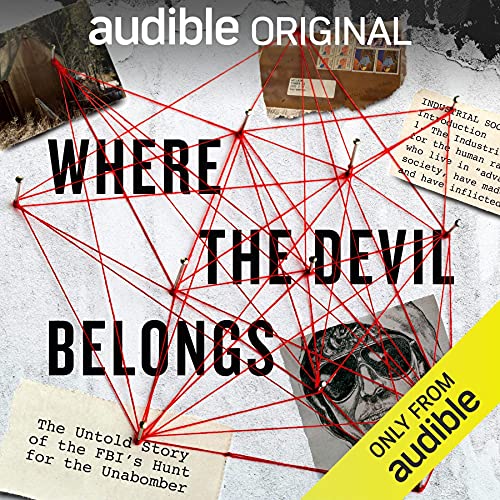 Where the Devil Belongs

What listeners say about Where the Devil Belongs

This is, quite simply, brilliant. It’s a real art to keep the listener fully engaged for the entirety of an audiobook, and this one does from start to finish. It is history, told by those who were involved, with so much more detail and intimacy than can be conveyed through a documentary. It is a superb piece of writing, with excellent editing that allows seamless transition from the narration to those voicing their individual experiences. Outstanding. I highly recommend After The Fall, from the same team, which is equally brilliant.

Engaging story and well paced. Loads of interesting facts about the case. Liked the insights into the workings of the FBI.

Lots of interviews with the FBI and victims

Lots of interview audio with key FBI agents and victims brings this to life. Not just dry facts gleamed from reports or newspapers. Very thorough and interesting, though does slow down in pace in some of the middle episodes.

very much worth listening to. one of the best productions I have listened to in this genre

Great listen. One of the best real crime podcast I've heard. Complete and with compelling testimonies.

Maybe the best podcast - esp true crime one - I've listened to. Fascinating from start to finish.

Anything presented by Jim Clemente is bound to be good (Call Me God, Evil Has a Name) - he’s my favourite non-fictional FBI agent ;)
This story of the search for the Unabomber is an essential for any true crime listener. It’s well researched and presented, plenty of input from the people involved, and keeps you gripped right to the end. Brilliant.

absolutely listen, and recommend over and over again.
fascinating, informative and terrified of these lone wolf's in today's society..past and present..
our FBI has their work cut out for them..
thankfully their up to the job..
can't thank them enough for their persistent presut....
putting this monster away, forever...

In depth.. step by step

this rein of terror started before I was born. hearing all of the first hand experiences from the victims, families, police, fbi, and specialists is amazing. thoroughly enjoyed this listen and what all I learned.

My own brother was profiled and investigated. Of course he was cleared, but it was always obvious to me how diligent and hard working the FBI was to finally resolve this case. It was enlightening to learn there were thousands of suspects. I liked that this story highlighted the research and the people who experienced this criminal without glorifying the bomber. He'll get no satisfaction from this being publicized.

Anything Jim Clemente puts his touch to is going to be golden, this is no exception. This was in depth and detailed and moving and all about the victims..the crimes…NOT glorifying the criminal. Just excellent.

although I knew a lot of this story already it was nice to hear it from people that were actually there and participated in the hunt and capture of the unibomber. very interesting story and really kept me captivated.

It’s a must read. I learned so much! Keeps you wanting to hear more and I love how you get to hear the different peoples stories.

Loved every minute, and learned new things about the Unabomber that I never knew.
Highly recommend!

Amazed at how hard they worked this case. Definitely the FBI's finest work, grrat commitment!