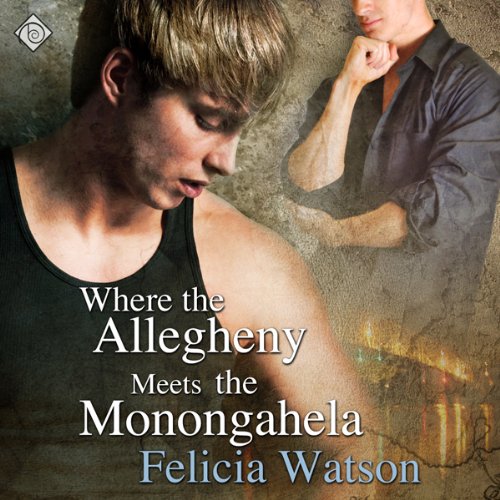 Where the Allegheny Meets the Monogahela

Where the Allegheny Meets the Monogahela

Logan Crane’s life changed dramatically the day a blind fit of temper resulted in him accidentally injuring his wife. Although he’s now in an abuser counseling program, Logan cannot face the real source of his unhappiness: He’s always been attracted to men but has refused to accept it since witnessing an act of violence.

During his therapy, Logan meets Nick Zales, a counselor at a shelter for victims of domestic violence. Nick is understandably suspicious of Logan despite an immediate attraction to him. Logan feels the same attraction and faces a critical internal struggle as he finds himself falling in love with this enigmatic man. Both men are haunted by unacknowledged ghosts and abuse in their pasts. How can they help each other heal if they continue to ignore their own wounds?

Satisfying romance and a less-travelled setting

I found this romance one of the better m/m offerings this year. The two main characters were well-differentiated and rather believable, and the supporting cast was interesting and believable. I also enjoyed the fact that the angts delaying the romance, based in anger-management and self-esteem issues, was credibly portrayed. I found the therapy sessions well-written and the character's slow self-awareness well laid out. The setting, somewhat mundane and working class, was also a welcome break from the jet-set model meets millionaire trope that seems so common to romance novels these days.

The novel begs for a sequel (not that it ends on a cliff-hanger) because there are some issues left unresolved, in particular familial relationships to work through.

If possible, I would have given 4.5 stars. The audio performance was also quite good and did honour to the quality of the written material.

This was a nice book to listen to, kept my attention. The characters were believable and interesting. I kept wondering where/how Felicia did her research for this book. A few weeks after listening I found myself at the point in Pittsburg - it's still under construction.

When I first started to listen to this story I was a little skeptical about the storyline and characters because I was not all to sure that I would be able to like one of the main character who had been an abuser - I mean normally they are the bad guys in the stories? But surprisingly this is actually a very sweet story and I enjoyed listening. It is a little different than most M/M romances by having a more serious storyline but it still makes my top 10. Narrator is fine.

Overall rating 3.5 rounded up. This is a very engaging story of anger, abuse and not being true to yourself. The story is really good and kept me engaged. Nick and Logan are very realistically portrayed and the story deals with some very real issues of domestic violence. The narrator was OK, not painful to listen to. But Jeff Gelder continues to be a little wooden, although this was much better than some of his past books. He had some diversity in the characters and at times puts emotion into his storytelling. I think it is his "pacing" of the story that doesn't quite flow. Sometimes it sounds like he is just "reading" it, which I could do without purchasing an audiobook. It is too bad because he as a great voice.

What did you love best about Where the Allegheny Meets the Monongahela?

I loved the Angst!! And the slow build in the romance between the 2 main characters. I liked that although one of the characters started out as possibly unlikeable, the author was
able to turn him into a character that you could root for.
I likes the fact that through the course of the book, the playing field leveled out, so that each character had issues and problems that needed resolution.
Loved that there was not any external drauma or "big misunderstanding"

I really ended up liking Logan very much. This whole book was sort of a quiet low key type of romance. And I liked Logan's evolutional journey into his self acceptance as a gay man.

The narrator did an "ok" job. His delivery was a little stilted and dry. It took a little to get used to but was alright.

The only thing I really didn't like about this audio version was the very very annoying way that
at the beginning of each chapter the narrator announced "Where the Allegheny meets the Monoghahela.....Chapter blah blah blah".....followed by the chapter title and some sort of quote or verbage. It was annoying and consistantly threw me out of the story.

An unexpected storyline, but very good

It took me a long time to get over exactly how the story begins. It is an enjoyable listen, and I really enjoy Jeff Gelder's narrations. The book is definitely worth the time and money.

I loved this story. It was different. Important. It really highlighted that everyone does deserve a second chance and a chance to be heard. Even the ones who majorly screws up. And Logan screwed up royally, there is no doubt about that, no excuses. It wasn’t okay then, and it’s not okay now. But more than that, that single moment shouldn’t be the ones that described or define him either. I loved how Felicia Watson didn’t make excuses or sweep it under the rug. Logan really had to work for forgiveness. Work to change and to accept himself.

Domestic abuse is not a new topic. I know I’ve read many books with survivors of all kinds of abuse. However, this time we follow the abuser instead of the victim. This is not something I think I’ve come across before, at least not this defined. Sure, Logan might not have been the worst abuse out there, the systematic and cruel and who got off hurting others. But he was no angel either. He had issues, secrets, and anger that just kept building and building. Until the one day he just flew apart and injured his wife in the process. It might have been mostly accidental, but it didn’t change the fact that he did hurt her, scared his kids and ended up in counselling for anger management in an abuser counselling program. Where he meets Nick, a counsellor that pushes every button he has and making him think of things long buried.

I believed in Logan’s journey. We were there for every step, watched and felt his struggles and how he tried to change, to do better. And more, it felt genuine. He wasn’t just going through the motions to get back with his wife and kids. Sure, in the very beginning he did that, but gradually that changed. He changed. I loved him and Nick together, their romance was a sweet one, slow-burn until that one day where it all just exploded. I loved how this story and these characters all felt credible to me – well except for Trudy the therapist. I couldn’t stand her, she was too judgemental and unprofessional to be a therapist. But then again, those most likely exists too.

This beautiful book was narrated by Jeff Gelder and I have to say that he’s not my favourite narrator out there. It wasn’t always easy to follow the POV switches as he only used the one voice and tone for the entire book. Gelder read the book, start to finish, he didn’t add any emotion into it, even the arguments and shouting were read in a dull-like tone. In this case, the story carried him and sadly he didn’t really do anything to enhance or elevate the listening experience.

Now, this audiobook was produced back in 2012, so it’s got some years on it. The story and characters are very much current, but the production of the book was not. I’m soo thankful that today’s audiobooks don’t have that musical interlude before every single chapter, and that said chapter don’t begin with “Where the Allegheny Meets the Monongahela. Chapter X” (or some derivative thereof). Because man does that have the power to drive me absolutely bonkers, not to say distract and detract from the story the listener should be immersed in.

I absolutely loved this story. It was beautiful, honest and refreshing. While the narration wasn’t the best – far from it – I still would recommend listening, or reading this book. It’s a story that deserves more credit, attention and love.