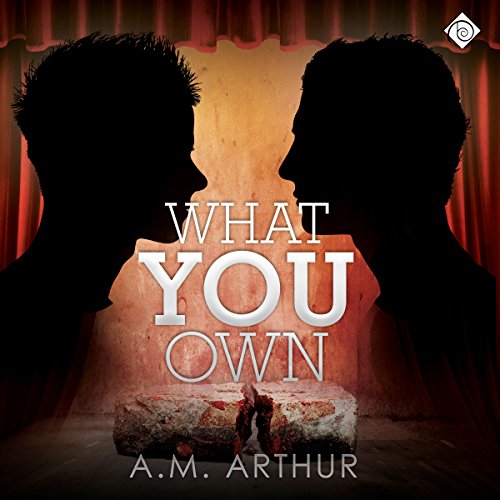 For Ryan Sanders, the Paige Community Center is more than a place where he teaches at-risk teens about musical theater. He found a sense of belonging there during one of the hardest times of his life. With the center facing a financial crisis, he'll do whatever it takes to keep the doors open - even soliciting fundraiser donations from Langley-Quartermaine Financial.

Adam Langley has a plan: survive an internship at his father's company, finish college, get his trust fund, and find his former high school best friend Ryan and beg his forgiveness. In that order, because if Ryan does forgive him, Adam believes he'll finally find the courage to come out to his wealthy, bigoted father.

Adam's carefully considered plan is shattered when Ryan appears at the office a full 10 months before Adam is ready, and Ryan is just as stunned. Against his better judgment, Adam gets involved with the fundraiser - and Ryan. Old feelings won't be denied, and as Ryan and Adam reconnect, they realize neither knows the entire truth about the horrific night three years earlier that tore their friendship apart.

What listeners say about What You Own

Parant who is homophobic

Story covers what it's like to be the son of a homophobic father and then situation its creates, I'm sure this happens regularly and makes a sad situation. well written and well narrated, enjoy I'm not so sure.

What You Own is both a friends-to-lovers and a second-chance story. In high school, Ryan and Adam were best friends, up until Ryan publicly came out as gay, and Adam's father pressured Adam to break it off. Little did Mr. Langley know, but Adam and Ryan were interested in more than just friendship. Soon after, the two were bashed in a parking lot, and once again Mr. Langley intervenes to keep the two apart. Now, three years later, the two meet again – and the sparks start to fly.

There's some drama involved, but nothing too heavy (not like Arthur's newest release, The Truth as He Knows It). Fans of Arthur will love this sweet romance, watching Ryan and Adam work things out and fall in love. There's ample chemistry, a solid friendship, and a good bit of sweetness involved, especially towards the end when Adam puts his heart on the line for Ryan!

This was actually my first time listening to a male/male romance. Michael Pauley did a wonderful job. He put emotions into the narration, rather than simply reading the words. His voice would speed up during times of high emotion, and deliberately slow down for other situations. His different voices were done well, and he even gave both boys slightly different voices when reading a flashback to their high school years. My only complaint is that sometimes I had a hard time differentiating between when the characters were speaking out loud and when they were thinking to themselves (when the two would occur back to back in a scene). Otherwise, Michael truly brought this story alive and I enjoyed every minute of it.

Not perfect, but sweet anyway

A friends to lovers and a second chance story makes me a very happy girl.

From the first moment they met Ryan Sanders and Adam Langley were best friends. They were thick as thieves and hung out as much as they could. Until the day when it became public knowledge that Ryan was gay and Adam's father forbade all contact between the boys. For a while they listened and obeyed, but one night that all changed with a first kiss. Unfortunately the kiss wasn't as private as they hoped and resulted in a bashing that changed both their lives. Their new and budding relationship was shattered and for three years they were never in the same room again.

Until the day when Ryan and his best friend Ellie is on a mission to secure founding for the Paige Community Center. A mission that lands them face to face with Adam. Old secrets and feelings surfaces and it doesn't take long for Ryan and Adam to get involved again.

I liked how the characters felt so genuine, both in terms of their strengths and flaws. I also felt like their behaviour matched their age (early twenties). I can’t tell you how many times I’ve read books where young characters feel like they are in their mid-forties, or when older characters comes across like immature teenagers. These characters were portrayed beautifully. Their feelings came across so clearly that it felt like you were right there beside them. Sure, at times I felt like it was a little on the dramatic side but then again that still fit with the story and the characters.

I like Michael Pauley as a narrator - I love his voice, it gives me this warm and cosy feeling that makes me wish I could just cuddle on the couch and listen. Well, not really, because I'm far too restless to just sit and listen, but I wish I could. Anyway, I love his voice and pacing of his narration. It is easy to follow along with the different voices he has for the characters.. That being said, there were times where this book was very confusing to listen to. It jumped between two timelines; the back in high school where the boys met, the friendship, falling in love, the bashing, then there is the main timeline - the now. That in itself isn't a problem, but when you listen to the audio you need some que that the time line changed; "Three years ago" etc. We never got that so when these jumps in time happened the story rarely made sense for a while. In the written book I'm guessing the past might be written in italics, just to highlight the change, a visual change that the listener never gets.

All in all it was a sweet NA story that I think works better in written form. That being said, I still enjoyed the time I spent listening to this story.

I liked the way this story centers on the two boys, who just on the verge of discovering them selfes and each other, becomes the victims of violence and lies and the story actually starts when they se each other serveral year later.
So they have a lot of baggage to overcome if they are to become a couple.
The story has a lot of flash backs from either MC and normaly im not a flashback fan. It works for this story and the author is able to write it so that you feel like you are seing the world from a younger and much more innocent boy.
Maybe not my top ten but Its worth a listen.

loved the narrate and the book very much, the book is amazing ❤ ❤ ❤

An unexpected surprise with excellent narration!

Would recommend as more than a sweet coming out story. Narrator nailed it. Enjoyed a lot.

This review is for more about the narrator, than the story but the writing itself is also poor even if the plot could have been good. I dnf'd it after less than 2% listening because the narration was rather poor. Perhaps not as bad as JP Handler, whose audio I won't buy, but apart from not giving any expression, Pauley doesn't even bother to give pauses when the sentences are too long.

And on those long sentences, the author is also to blame for the narrator's poor performance. An experienced narrator could have known how to insert a pause, or someone who had read the story first in order to prepare for the job. In Pauley's case,he's either not the former or did not bother to prepare. That said, the only pause Pauley could have done would have been to pass out from lack of oxygen after reading one of those long paragraph-long sentences!

Some fiction books just aren't suitable for audio because the authors weren't conscious of how their writing would SOUND as opposed to being read. This is one of them. A fail here for both writer and narrator:(