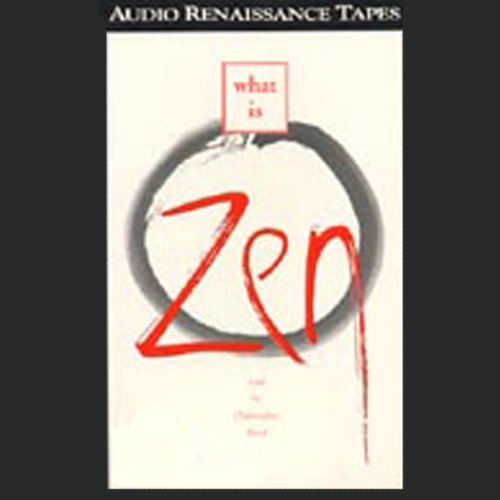 What Is Zen is the quintessential beginner's guide to achieving enlightenment. In simple, often poetic language, the author offers a general introduction to the concepts and philosophy of Zen Buddhism. He describes what it is, how it began and evolved, and how its emphasis on simplicity and self-effacement have helped shape an aesthetic found throughout Japanese culture. D.T. Suzuki lived to the age of 95 and was Japan's foremost authority on Zen Buddhism. What Is Zen is the first in a series of programs taken from Suzuki's Zen and Japanese Culture.
©1959 by Bollingen Foundation Inc. Copyright Renewed 1987, Princeton University Press (P)1995 by Audio Renaissance Tapes, A Division of Cassette Productions Unlimited, Inc.
Philosophy Buddhism
Show More Show Less

"There is something incredibly soothing in the old Japanese virtues, as Mr. Suzuki describes them." ( The New York Times)

What listeners say about What Is Zen

This is a deeply interesting book. What is Zen? Zen. Zen does not permit one to think. Zen demands a deep illogical understanding. Thus, it forces one to go to the essence of its philosophy. As a western thinker, this is provocative, radical and fascinating. In Zen, I is am or is. In western philosophy, I think therefore I am. Zen takes us to a place before thinking.

More of a review of historical origins of zen

Look elsewhere if you want to actually understand zen. Lots of history and how Buddhism spread from india to china to japan etc

What is Zen by D.T. Suzuki

This is my first experience with information about 'Zen'. It is a wonderful example and is layed out in an easy to follow format. I recommend it for anyone wanting to learn about the basics of 'Zen'.

profound. recommended. Suzuki Rpshi transmits the precious Dharma, but who is Suzuki and what is Dharma? What can be said is what can not be said.