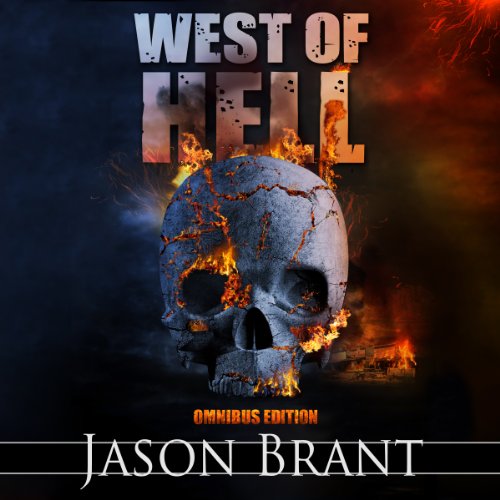 By: Jason Brant
Narrated by: Robert Martinez
Try for £0.00

When two cannibalistic, gravely wounded men stagger into the town of Gehenna, all hell breaks loose. Infamous outlaw Mad Dog McCall, stuck in the city jail, must fight for his life to escape. The lonely, intelligent, and snarky Karen must make horrific sacrifices to survive the night against the growing army of the dead.

Together they set upon a journey of biblical proportions, fighting against the living and the infected, hoping against hope to find a safe haven in the middle of Hell.

The Old West can't fathom the zombie hoard that is about to consume it.

This Omnibus Edition collects the three West of Hell books into a single volume at a discounted rate.

What listeners say about West of Hell Omnibus Edition

Would you try another book from Jason Brant and/or Robert Martinez?

Yes I would give this combination another go. When the story was a little ordinary, Martinez was able to carry it through. I would say that with most Martinez narrated books the speed can easily be increased to 1.25x and 1.5x so if you were after a 13hour long story you might be disappointed.

Would you be willing to try another book from Jason Brant? Why or why not?

After reading the first part in this omnibus I would have said 'no way would I waste money on another Jason Brant book'. But then the story took off! The last two thirds of this book was great and I couldn't put it down. The ending was a surprise, and left me wanting more story.

Despite the first part being a bit of a chore, the narration was good enough to keep me going.

In the future I would happily exchange my hard earned cash for any book from Jason Brant as long as it had a top narrator like Robert Martinez or a R C Bray.

Perhaps my thoughts and feelings about the start of the story might have been influenced by the fact that I had just finished listening to 'Torment' by Jeremy Bishop which is 'unique' in the zombie world! Perhaps I was comparing and contrasting them too much rather than taking 'West of Hell' on its own merit.

Did Robert Martinez do a good job differentiating all the characters? How?

The story really has two main characters, Karen a prostitute and McCall a good guy outlaw. Martinez doesn't try to narrate in a woman's voice (which is a relief) He does however change his voice for McCall's voice. In that he does an excellent job!

Did West of Hell Omnibus Edition inspire you to do anything?

The story certainly did not inspire me to do anything. But I don't think it ever was an intention of the story.

I am little concern at how many books I am now purchasing which can easily be sped up in speed to 1.5x without any problems. It certainly makes a bit of a mockery of the actual listening time given for any title

Which character – as performed by Robert Martinez – was your favorite?

the narration was great. martinez's portrayal of madd dog mccall was believable and authentic. he sounded gruff and tough as expected of an infamous wanted man. i was brought into the old west by his performance.


the old west meets zombies...i wasn't too sure about that mix of genres, but i decided to give it a shot, and i'm glad i did!

at first i was thinking...mad dog mccall, the infamous outlaw? ok. kind of cheesey and cliche. but what you end up with is a great character with a lot of depth. i was surprised by his back story. karen is also another good character, not just your typical tough woman in the old west.

as the story opens, mccall is in the town jail. karen is at the brothel, when they hear a commotion outside. as the patrons rush to see what the fuss is all about, they see 2 men attacking a woman. to their shock, the 2 men are biting her and ripping chunks of flesh from her. the patrons rush out and try to tell the men to stop. the deputy sheriff arrives. he's young and green and orders the men to stop or he'll shoot. his yelling attracts the attention of the 2 dead men. when they stand, the deputy sheriff and the patrons notice these 2 disheveled men have arrows sticking out of them, and one even has a tomahawk embedded in his chest. as they approach the deputy, he shoots them in the chest, but nothing happens. as the zombies descend upon the deputy, a few of the patrons help wrestle the zombies off of him. hearing the gunshots, the sheriff leaves the jail house to see what the heck is happening. when the sheriff arrives, the patrons are managing to hold the zombies down, but it hasn't been without consequences. a few complain to the sheriff that these weirdos bit them. the sheriff, a real stickler for the law, orders the 2 strangers to be handcuffed so they can be thrown in jail to cool off.

needless to say, those bitten begin to change and all hell breaks loose!

all 3 parts of this story are good. mccall and karen are good characters that actually have depth. there's also a good bad guy in this story, and he's not the usual type.

there's a lot of good zombie battling throughout this story. so, don't be put off by the mix of genres. it's actually well done!

This book was a really fun listen. It has the same feeling as a Deadlands RPG session.
the narrator was good and has excellent pacing, I did not have to speed him up at all to enjoy it.
The story itself was a Western Horror that gave a string impression of the characters trying to escape perdition, but told well enough I enjoyed it the whole time.

What was one of the most memorable moments of West of Hell Omnibus Edition?

The saloon setting at the beginning of the story

The part were the hero saved the heroine from being hanged

This is an old west tale, where the dead rise up again.

If you can accept that much, then the rest of the story is all completely believable. For what it's worth, the word "zombie" never gets mentioned, and the lore about them is unknown. The various characters are all fun, and I found the story compelling all the way through.

Enjoyed the books, good voice acting, nice story line. Sadly there were not any more books in this series. if you are a zombie fan, give it a try.

Would you listen to West of Hell Omnibus Edition again? Why?

Parts felt like a TWD fan fiction but other parts were original and well-written and well-read. I'm only 8 of 9.so many hours in but finally felt confident that I know where the story is going to end to write a review. May update if I'm surprised.
*I like how it all tied in.
*This author pays attention to plot holes and giving a couple subtle variations to fill such without outright giving it away - he believes his target audience is intelligent enough to get it, and that's flattering after reading many novelists whose writing would suggest otherwise
*As a fan of many Wyatt Earp fictions, and modern mystery and suspense, I appreciate how likeable the main characters are. Slightly flawed but end up being their strengths (interpret how you will but that isn't a spoiler)
*As a fan of similar genres and, I suspect, certain comics, a lot of the plot became evident/predictable very quickly, which is the ONLY reason this isn't 5 stars - but that's a personal rating and think most readers would/will rate it 5* or higher :)
*Actually the 4-star rating is also greatly due to the narrator, who was good... but I wanted a deep Southern accent (in my head) or at least a nasal old Chicago tone, so was disappointed at his monotony; which leant itself agreeably to certain turns of phrases, but was overall a disappointment. Pleasing voice, but wouldn't suggest for this genre again. For comparison, I'd suggest a celebrity like ... that guy in 2013's True Grit (just blanked on his name) ... That one actor, you know. He's in a lot of old Westerns, but not like John Wayne-old....
This is a long review, is anyone still reading this?

Have you listened to any of Robert Martinez’s other performances before? How does this one compare?

Not sure but he has a great "Discovery Channel" voice. Don't recommend for narrating Westerns, but in the right genre would do well.

If you could take any character from West of Hell Omnibus Edition out to dinner, who would it be and why?

That kid they forgot about fighting for at some point. RIP Steven (Stephen?) maybe...

the story wasn't bad, if u can stand listening to an awful performance. old West zombies is a fun idea.