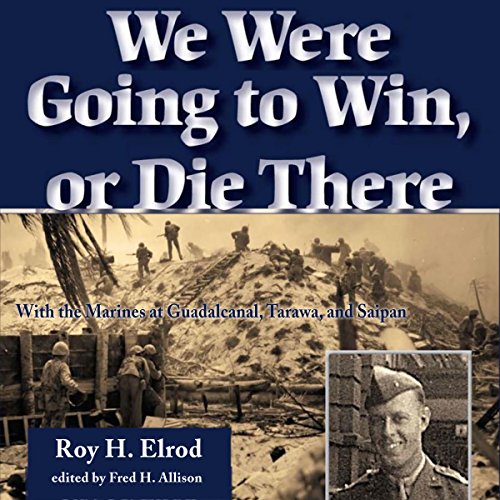 We Were Going to Win, or Die There: With the Marines at Guadalcanal, Tarawa, and Saipan

In 1940, native West Texan Roy H. Elrod joined the Marine Corps. By the time his unit, the 8th Marine Regiment, went into the fight at Guadalcanal, he was commanding a platoon of 37 mm gunners. They endured Japanese attacks, malarial tropical weather, and starvation rations. His combat leadership earned him a Silver Star and a battlefield promotion.

On D-Day, his platoon waded their 37 mm cannons ashore, each weighing nearly 1,000 pounds, through half a mile of bullet-laced surf to get to an island where the killing never stopped. His was the only platoon to get its guns ashore and into action that first day.

Saipan was not as intense, but just as deadly. Here Elrod commanded a platoon of 75 mm halftracks. Again, he kept his platoon in front-line combat, blasting enemy caves and pillboxes. It was a dangerous place to be - Elrod was riddled with shrapnel from an enemy artillery shell that ended the war for him.

The book is based on more than 50 hours of interviews conducted by Marine Corps historian Fred H. Allison, who also drew upon Elrod’s wartime letters home and provided annotations to the narrative. It is a view of the war from the perspective of a young Marine infantry officer, a job that had an extremely low survival potential.

"This exceptional work by Dr. Fred Allison ensures Elrod's sacrifices and experiences as a United States Marine will be remembered." (Leatherneck Magazine)

What listeners say about We Were Going to Win, or Die There: With the Marines at Guadalcanal, Tarawa, and Saipan

Account from a V18 hero who rose from private to captain in the same unit. Genuine and heartfelt with many pearls of wisdom. 5* and highly recommended to anyone who enjoys history or biographies.