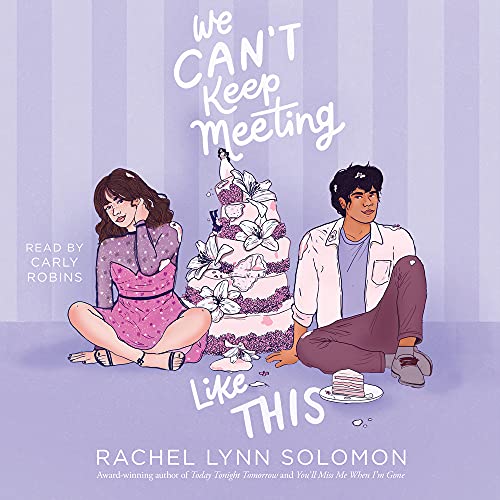 By: Rachel Lynn Solomon
Narrated by: Carly Robins
Try for £0.00

A wedding harpist disillusioned with love and a hopeless romantic cater-waiter flirt and fight their way through a summer of weddings in this effervescent romantic comedy from the acclaimed author of Today Tonight Tomorrow.

Quinn Berkowitz and Tarek Mansour’s families have been in business together for years: Quinn’s parents are wedding planners, and Tarek’s own a catering company. At the end of last summer, Quinn confessed her crush on him in the form of a rambling email - and then he left for college without a response.

Quinn has been dreading seeing him again almost as much as she dreads another summer playing the harp for her parents’ weddings. When he shows up at the first wedding of the summer, looking cuter than ever after a year apart, they clash immediately. Tarek’s always loved the grand gestures in weddings - the flashier, the better - while Quinn can’t see them as anything but fake. Even as they can’t seem to have one civil conversation, Quinn’s thrown together with Tarek wedding after wedding, from performing a daring cake rescue to filling in for a missing bridesmaid and groomsman.

Quinn can’t deny her feelings for him are still there, especially after she learns the truth about his silence, opens up about her own fears, and begins learning the art of harp-making from an enigmatic teacher. Maybe love isn’t the enemy after all - and maybe allowing herself to fall is the most honest thing Quinn’s ever done.

What listeners say about We Can't Keep Meeting like This

It’s ok, but a bit disappointing as I thought it would be better, especially after reading The Ex Talk. Story is just ok; and narrator is ok, but I recommend speeding up the narration.

OH GOD !! .. I can't believe this is the same author who brought us (Today, Tonight, Tomorrow) .. this was so irritating
The story is about Quinn who works with her family in a wedding planning business, she has OCD and she is afraid of love, then we meet Tarik who works in catering for weddings and he is her former ( and on going ) crush who ghosted her when she confessed her love to him and that hurt her a lot, so this summer they meet again and they will meet a lot in EVERY wedding in the area .. and their relationship will progress from there..
the whole book I wanted to slap Tarik so hard .. I mean how whipped can you be to turn a blind eye of a toxic relationship ? .. and don't get me started on Quinn .. she is such a tease and such a horrible person, I don't care what happened to her in the past no one get to be this evil and get a happily ever after !! .. and the representation of the Muslim community ( face balm ) .. this book deserves to be forgotten and never to be mentioned again
the narrator was the best part of the book .. other than that the book is not worth it