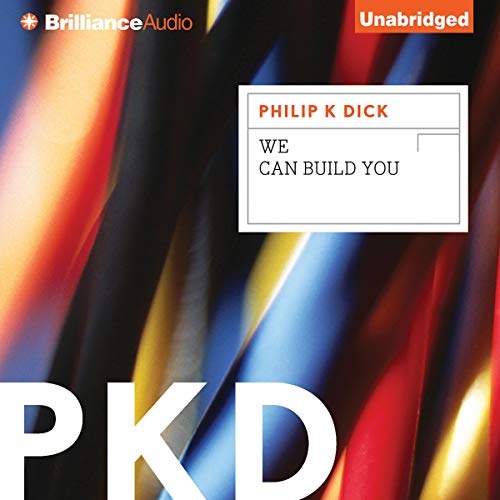 We Can Build You

In this lyrical and moving novel, Philip K. Dick intertwines the story of a toxic love affair with one about sentient robots, and unflinchingly views it all through the prism of mental illness - which spares neither human nor robot. The end result is one of Dick’s most quietly powerful works. When Louis Rosen’s electronic-organ company builds a pitch-perfect robotic replica of Abraham Lincoln, the firm is pulled into the orbit of a shady businessman, who is looking to use Lincoln for his own profit. Meanwhile, Rosen seeks Lincoln’s advice as he woos a woman incapable of understanding human emotions - someone who may be even more robotic than Lincoln’s replica.

What listeners say about We Can Build You

One Man's Schizophrenia is Another Man's Happiness

We Can Build You follows Dick's fascination with mental illness and what it is to be human, culminating in a remarkably good book that unfortunately loses its narrative theme once too many times to be considered a classic.

The story concerns Louis Rosen, a piano salesman, as he embarks on a joint venture with his business partner in recreating life like simulacra modelled after American civil war icons. During this he falls in love with his partners schizophrenic daughter and slowly tumbles down the rabbit hole into mental illness himself.

Although linked to Dick's novels of the same period 'Clans of the Alphane Moon' and 'The Simulacra', for me this work felt closer to his final novel 'The Transmigration of Timothy Archer'. Told from the first person, we see Rosen's attempts and failures at life and work, and his slow mental decline all told from the matter of fact and simple writing Dick is so well known for.

The problem with We Can Build You is that the main crux of the story, the building of a Abraham Lincoln simulacrum, gets overshadowed by the schizophrenia. An obvious way of portraying life's difficulties with the illness, but as a result lacks the mystery and adventure Dick can do so well.

If you are a fan of Dick's works then this will entertain and enthral you, as it covers so many of his themes. However the strong subject matter and disregard for the story's central narrative may turn some away.

The narration by Dan John Miller is perfect and truly brings the novel to life.

A five star by itself. In comparison to other Philip K. Dick works; an eight out of ten.

Unexpectedly fun to listen to.

So, I can't seem to find a straight answer on this, but it seems to me that this could be a deliberate prequel to Do Androids Dream of Electric Sheep--having JUST finished that one right before this, it is not difficult to connect additional meaning to the events, names, and technology that's shared between the two stories. Perhaps it's similar to the "Man With No Name" trilogy--certainly not a direct correlation between the stories, but maybe a story that takes place in a parallel universe. In any case, it's super fun to connect the dots, even if they weren't intended to be connected. The tone is COMPLETELY different from the aforementioned book--the two business partners at the forefront of the story are like Click and Clack from the old NPR show, Car Talk, and the addition of an android Abraham Lincoln feels like it could have easily inspired Bill and Ted's Excellent Adventure.

I also grew up in the piano business, so it had me laughing out loud to be reading the uncanny realism and accuracy that PKD captured regarding the piano/home organ business in the late '70s and early '80s which was when my dad's business really had it's hay days. He either did some serious research, or maybe had a chapter of his life where he himself worked in piano sales. That's such a bizarre business to feature in a novel, but it was such an unexpected delight to stumble upon.

The plot is heavenly affected by trying to figure out how to profit from creating electronic doppelgangers of historical figures, piecing together their virtual consciousnesses from the vast libraries of knowledge recorded about them through history. There isn't much time wasted on trying to make it seem plausible--that isn't important to the story--nor is there much time wasted re-hashing trite philosophical ideas about whether or not these androids (or "simulacra" as they call them in this story) have "souls," etc. It is self apparent within only a few lines of discourse that whether or not they were created by the hands of man, they embody the same characteristics that make humans "human," and therefore, the characters just roll with it and move on with the real meat of the story.

The last few chapters seem on the surface to get derailed from the rest of the story, deviating from the android-driven plot and delving into a world of schizophrenic psychosis, but after letting it sink in, I feel like that's part of the real meat of the underlying themes PKD may have been exploring. We're already thinking about what's on the surface--are androids alive?--but then we're offered more related questions: Are the visions of our minds worth validation? Is a fantasy life inside a schizophrenic delusion worth as much as the reality of an unreciprocated love? Is the illusion of life from an artificial intelligence the same kind of delusion? Does it matter?

What I think I appreciate most is that we aren't ever asked these questions, nor presented any conclusions. We're simply offered the situations that the characters encounter, and are left to ask our own questions about the implications.

“Hell,' I said, 'love is an American cult. We take it too seriously; it's practically a national religion.”
― Philip K. Dick, We Can Build You

Is this a PKD novel? Does it contain?

This novel scores 12/15 on the PKD meter, and most certainly is a work of PKD.

The aspect of PKD that makes his novels work for me, I've recently decided, is their ability to span an almost base-level of human existence; the greasy hair, wrinkled clothes-level but link it directly to some metaphysical otherworldliness. He does this not only through his exploration of big themes and ideas, but also through clever beginnings. I love the idea that the company that starts making simulacra in this novel was a small, Western electronic organ company that is trying to schlep its organs to various people using sleazy sales practices.

Because of a changing economy, they arrive at the idea of constructing a simulacra of both Edwin M. Stanton AND Abraham Lincoln. Genius. Anyway, the simulacrum idea is the catalyst that Dick uses to explore his often examined ideas about what it means to be alive, human and to love. I adore that both Lincoln and Stanton appear both just as alive and probably more rational than most of the humans they are interacting with. I love that Lincoln ends up giving relationship advice to the narrator (who happens to be in love with a woman who today would out spectrum Sheldon Cooper). Anyway, it was good, solid PKD. Not a place to start, but if you find yourself on a PKD tear, not a bad book to drive through.

Love PKD, did not love this book

It's clearly a precursor to future works, but it was quite boring and uneventful. the narrator's female voice was an odd choice, too.

This is neither the best nor the worst

This is not PKD at his best nor at his worst. It is good. I have been fond of it for a long time. The performance is very good. The voice talent often sounds like the late actor Bill Paxton. That is entertaining.

I thought Phillip K. Dick was a better writer. This book did not age well. Not at all. Pass on this. Narration isn't too great either.