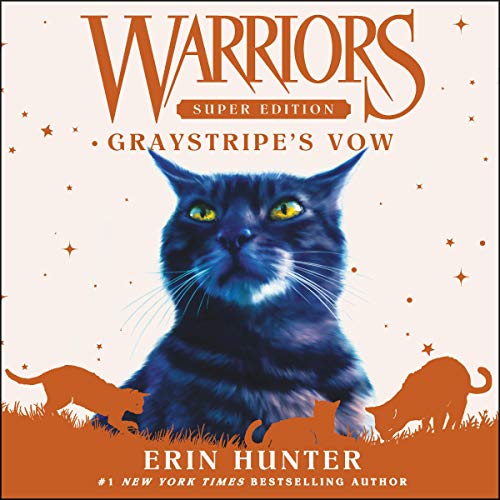 In this super edition, set during the events of The Broken Code, respected ThunderClan warrior Graystripe seeks a path to the Clan’s future by returning to his past - and the Moonstone in the Clans’ old forest territory.

Graystripe served ThunderClan for many moons before retiring to the elders’ den. As Firestar’s most trusted friend and deputy, Graystripe promised that he would never abandon his home. But as new tensions strain ThunderClan, Graystripe will need to call on all of his long history, leaving ThunderClan behind in hopes of finding an answer that might save it.

Join the legion of fans who have discovered the epic adventures, fierce warrior cats, and thrilling fantasy world of the mega best-selling Warriors series. This stand-alone entry is perfect for new listeners and dedicated fans alike.

Fantastic book, i see Graystripe in a totally different way now. i love to be back in the old forest.

great story, but one problem

I cannot Express how deeply I hate that the narrator gave graystipe a lisp. but other than that it's a amazing experience.

I waited for something interesting to happen but it never did. Kind of disappointed.

Awesome as usual. Graystripe is one of my favorite warriors. Happy he has a story.

ok but kind of boring

I don't feel like a lot happened in the plot as a result of this book? maybe if they had done either the past plot or the current plot alone It would have been pretty interesting but as it was I felt like it kind of just drudged on. I mean nothing really happened in the end outside of Graystripe ending up exactly where he started mentally and physically?
I would have liked it significantly more if it where just going into more detail about his few months of leadership that took place during Firestars quest. I feel like those chapters were the only ones that kept me wanting to finish the book.

One of my favorite characters! Loved this, leads in to his return in TBC.

I wanted the story of tribe of washing water
finally, this was fun, also I loved graystripe's story

It's a good book for people who like the warriors series a lot. Hope you guys enjoy! lol.

This is probably the best Super Edition the Hunters have made. I loved it a lot.