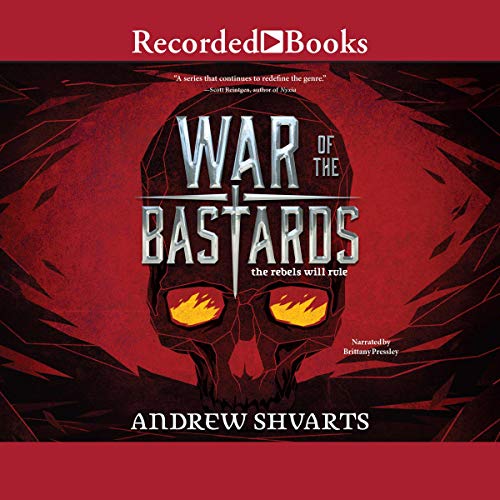 War of the Bastards

War of the Bastards

A year has passed since the fall of Lightspire. The Inquisitor Miles Hampstedt has usurped the throne and rules Noveris with a blood-soaked iron fist.

Tilla and her friends have become hardened rebels in the Unbroken, a band of guerrilla fighters hiding out in the fringes of the kingdom. Tilla is plagued with doubt and regret; Lyriana struggles with the burdens of being a fugitive queen; Zell atones for his guilt by killing for the cause. And even as they all fight, they know their cause is doomed, that with every passing day, Miles' power grows, his army of bloodmages spreading to cover the continent.

Then, a raid on an outpost produces two unexpected prisoners: Lord Elric Kent himself, now a prisoner obsessed with revenge, and Syan See, a strange girl from the Red Wastes. Tilla struggles with the emotional weight of confronting her father, but it's Syan who offers the true revelation. She demonstrates a new incredible kind of magic and speaks of a secret civilization hidden in isolation in the mysterious Wastes.

With Miles' forces closing in, Tilla and her friends (alongside a hostage Lord Kent) set out to make contact with Syan's people, to make a pact that could turn the war. The journey will test their character, forge unlikely alliances, reveal the horrifying true nature of magic, and set in motion a battle that will determine the fate of Noveris itself.