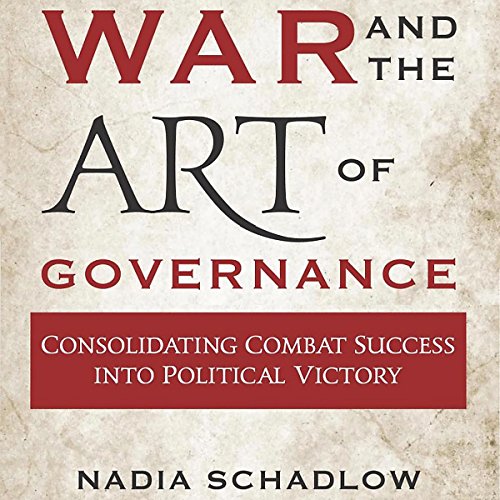 War and the Art of Governance

By: Nadia Schadlow
Narrated by: Robin Rowan
Try for £0.00

Success in war ultimately depends on the consolidation of political order. Nadia Schadlow argues that the steps needed to consolidate a new political order are not separate from war. They are instead an essential component of war and victory. The challenge of governance operations did not start with the wars in Iraq and Afghanistan. The US Army's involvement in the political and economic reconstruction of states has been central to all its armed conflicts from large-scale conventional wars to so-called irregular or counterinsurgency wars. Yet, US policymakers and military leaders have failed to institutionalize lessons on how to consolidate combat gains into desired political outcomes. War and the Art of Governance examines 15 historical cases of US Army military interventions, from the Mexican War through the wars in Iraq and Afghanistan. Improving future outcomes will require US policymakers and military leaders to accept that plans, timelines, and resources must be shaped to reflect this reality before they intervene in a conflict, not after things go wrong.

The book is published by Georgetown University Press.

"In this critically crafted must-read before we enter another war, Dr. Schadlow lays out the post-combat challenges...persuasively charting what history tells us is required for our military victories to achieve a better peace." (James Mattis, US Secretary of Defense)
"Quite simply, this is a timely and brilliant book." (David Johnson, Modern War Institute at West Point adjunct professor, Georgetown University)
"A must-read for anyone who wants to understand the underlying failures of the last 15 years and wants those searing experiences to better position US strategy in the future." (Frank Hoffmann, author of Decisive Force: The American Way of War)

What listeners say about War and the Art of Governance

This book captures a very real capability gap in our U.S. national security apparatus. Our senior military leaders continue to fail to ensure the U.S. military is fully prepared to attain complete accomplishment of political objectives because they have returned to a focus on "great power competition" without addressing how to prepare the military for how to consolidate gains through stability operations. Doctrine is not enough. We are in "American Denial Syndrome" and wishful thinking will not save us. All military leaders and civilian policy makers must heed the lessons captured here.