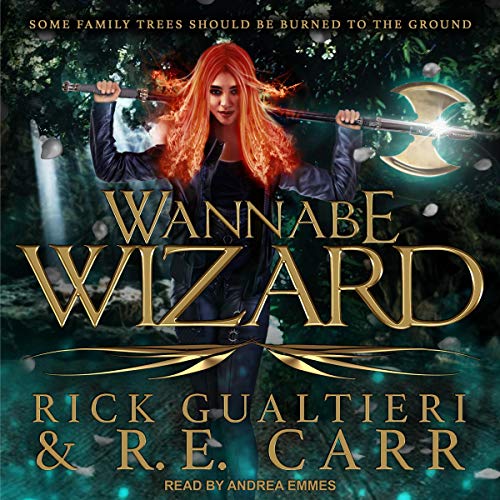 Wannabe Wizard: From the Tome of Bill Universe

Some family trees should be burned to the ground

My name is Jessie Flores and I thought I was done being jerked around by witches, dryads, and gods in my quest to become a real-life superhero. Turns out they were just getting started.

My father's been kidnapped, a handsome vampire with a shady past won't stop shadowing me, and my best friend's family is actively trying to kill him.

Fixing all of that won't be easy, though, since I've been cursed to complete 13 divine trials, while a newb fury haunts my every step. If I fail, I'll die. If I hesitate, my friends will suffer instead.

I might not have enough power in me to save my loved ones and satisfy the whims of the gods. But you know what? I'm willing to die trying. Because that's what a real hero would do.

What listeners say about Wannabe Wizard: From the Tome of Bill Universe

So strange to read some of the Time of Bill happenings from a different perspective, but still a great story. I can't wait to see what happens next!

One of my favorite authors

His books are just fun. I really enjoy the story & humor. Characters are great too. This 2nd book in the series reveals a little more of Jessie’s history & ties her story to the Tome of Bill well.

A great addition to the Tomb of Bill Universe

This is a lot of fun to listen too, great story and the reader does a great job. If you are coming in without hearing or reading the books, you may be confused for a few chapters. So check out Second String Savior first, also check out to Tomb of Bill. lost of fun all of the way through.