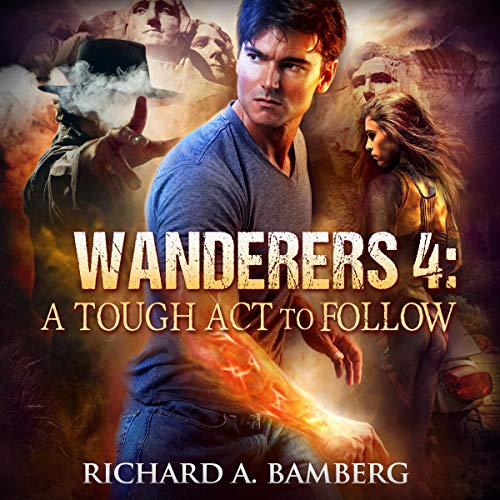 By: Richard Bamberg
Narrated by: Johnny Mack
Try for £0.00

If Ragnarök has been prevented and Rowle slain, then why are the Wanderers Raphael and Therese under constant attack?

Can a Wanderer survive the loss of his magic?

Fate, the Norse Norn, Verðandi, informs Raphael that another Wanderer has been reaped and that he has another new apprentice to train.

If only that were as easy as it sounds.

The life of a Wanderer has never been without its hazards. However, now not only are their supernatural foes out for blood, but the government has cast its controlling eye on the Wanderers. Raphael, Therese, and an old friend must locate the new apprentice and bring him under their protection before an old foe can stop them.

The fourth novel in The Wanderers series delves deeper into the worlds of the gods and into the history of the Wanderers and their duties as Fate's minions.

What listeners say about Wanderers 4: A Tough Act to Follow The Wanderers

Our heroes had to reconsider everything!

In this book, we no longer have Ragnarok to worry about. However, our two MCs found themselves in one trouble after another while trying to find Rafe’s son and newest Wanderer apprentice.

The biggest trouble for Rafe was a loss of his powers. Tess had to step up in big ways and it was so much fun when Chris from Book 1 also got involved.

The most interesting thing is the revelation at the end. I’m left with wondering who’s really the bad guy. Definitely hoping there’s more books to come.

As usual, Johnny Mack’s narration is great and I loved listening to this story.