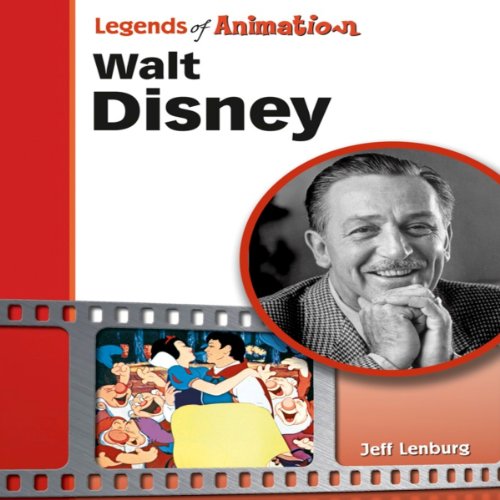 Walt Disney: The Mouse That Roared (Legends of Animation)

Best known for creating Mickey Mouse, Walt Disney is one of the 20th century's most honored and important icons of animation. After producing animated shorts and launching his own animation studio, Disney introduced Mickey Mouse to the world in 1928, and released the first American animated feature film, Snow White and the Seven Dwarfs, in 1937. During his career, Disney worked as an animator, director, producer, and screenwriter and expanded his business to include the world-famous theme parks Disneyland in California and Disney World in Florida.

Nominated for 63 Academy Awards, he produced many cartoons and feature films considered classics today, including Bambi, Cinderella, Peter Pan, Pinocchio, and Sleeping Beauty. His artistic and technological innovations include developing the first sound cartoon and pioneering animation techniques such as personality animation, three-strip Technicolor, and multiplane animation. Walt Disney: The Mouse That Roared delves into this man's colorful life, explaining the inspiration for his classic creations and revolutionary animation techniques.

What listeners say about Walt Disney: The Mouse That Roared (Legends of Animation)

Good, if a bit short

For those wanting to learn more about Walt Elias Disney, this is a good place to start. This audiobook is competently written and narrated, but it just lacks that extra bit of uniqueness and intrigue that would earn it a 5-star review.

I'm one of those people who likes reading about Walt Disney, and I find that every biography contains slightly different information (in the sense that they aren't really repetitive, not in the sense that some are inaccurate). This was no exception; it contains lovely stories that I hadn't heard before, and more details about the end of Disney's life that I hadn't seen in such focus before. It's definitely a great read, it's not at all redundant, and it's splendidly paced. The narration adds to these positive factors, making this an incredibly worthwhile, albeit short, well-composed biography.

Excellent review of an extraordinary life

A tight, concise, and highly informative biography of a remarkable man. From humble begins to the many fits and starts to what would become a multimedia and theme park empire, I learned so much about the long and winding road to the Magic Kingdom. Narrator Al Kessel does a terrific job narrating the story, giving real life to a man long lost to us.