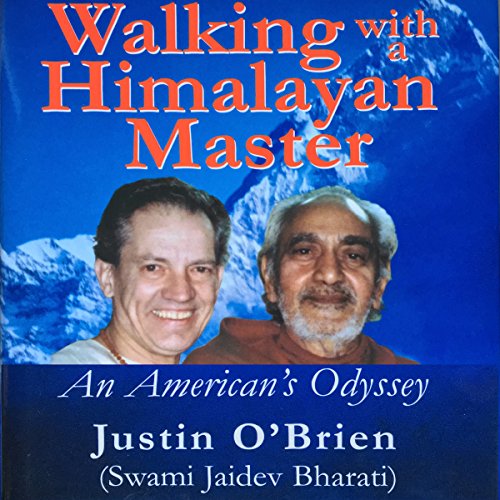 Walking with a Himalayan Master

This is the American autobiography of a Yogi. The superb, exciting, powerful story of one man's struggle and joy in following one of the greatest Himalayan yogis of the century.

A skeptical American scholar reluctantly meets a great Himalayan master and a new vista emerges for this century! Going where few have ever ventured, we resonate with O'Brien as he zig-zags through a personal quest for the ultimate; prodded by a great saint, yogi, and scientist who called the Himalayas his home. This book offers the exciting, powerful, and delightful story of the extraordinary yogi, Swami Rama, and the author's candid revelations of his own real spiritual odyssey.

Drawing on five diaries and the recollection of countless conversations, O'Brien vividly shares his first person autobiographical account with a second main character, Swami Rama - O'Brien's revered teacher and friend. The listener is invited to join the master and disciple as they walk shoulder to shoulder from their earliest acquaintance at a retreat in 1972 to the construction of teaching centers in the United States, India, and Nepal, to the final days in 1996 of one of the greatest yogis of the past century - Swami Rama of the Himalayas - and beyond until O'Brien renounces all to live the life of a yogic swami.

Listeners will learn that yoga is a science of life that opens resources not by faith, but by enriching the body, mind, and spirit. From the extraordinary yogi who brought together East and West in his teachings of medicine and spiritual growth, they will learn how to more fully experience life. They will be mystified as were the scientists at the prestigious Menninger Clinic by the sage's control over his mind and body. And they will be delighted by O'Brien's sense of humor and lucid descriptions which keep the work within human perspective.

What listeners say about Walking with a Himalayan Master

Highly recommended audio Book on understanding your inner world ,as well as, the World we live in.

This book will not be for everyone, but if you are in need of inspiration of how great a human being can be, what we can achieve, and how to achieve it, then this book will inspire you. This is a great book about a great man and the story is well told. It will bring you to tears and inspire you to be more conscious of how you life your life.