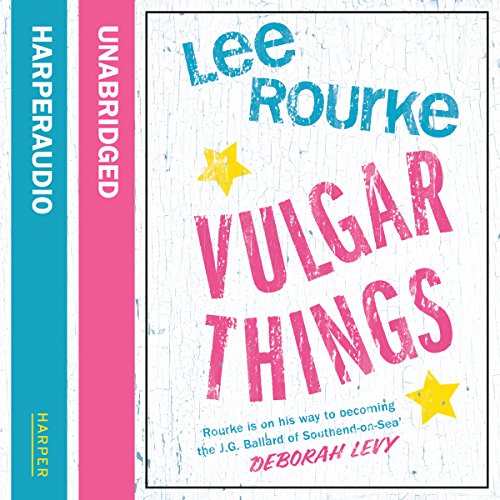 The second novel from Lee Rourke, author of the cult hit The Canal.

Jon Michaels - a divorced, disaffected and fatigued editor living a nondescript life in North London - wakes one morning to a phone call informing him that his uncle has been found dead in his caravan on Canvey Island. Dismissed from his job only the day before and hung-over, Jon reluctantly agrees to sort through his uncle's belongings and clear out the caravan. What follows is a quixotic week on Canvey as Jon, led on by desire and delusion, purposeful but increasingly disorientated, unfolds a disturbing secret, ever more enchanted by the island - its landscape and its atmosphere.

Haunted and haunting, Vulgar Things is part mystery, part romance, part odyssey: a novel in which the menial entrances and the banal compels.

Advance praise for ,Vulgar Things:
"Sad, lost men looking for maps in the starry Essex sky, small-town strippers, absent mothers, angry brothers, planets photographed on smart phones, cider and a lot of rare steak - Rourke is on his way to becoming the J. G. Ballard of Southend-on-Sea." (Deborah Levy)
"The poetry of estuary landscapes - muddy creeks, silhouettes of refineries, the slow passage of giant container ships, the flat horizon - shines through Lee Rourke's prose with a black luminescence." (Tom McCarthy)
"As poignant and unsettling as a beam of light hitting the night sky from across the far-off wastes." (Eimear McBride)
"A consistently disturbing yet compelling vision of loss, violence and identity, Vulgar Things stalks the reader's memory long after the last page. A novel of innovation and resonance, it is as bleak and as beautiful as a deserted coastline." (Stuart Evers)