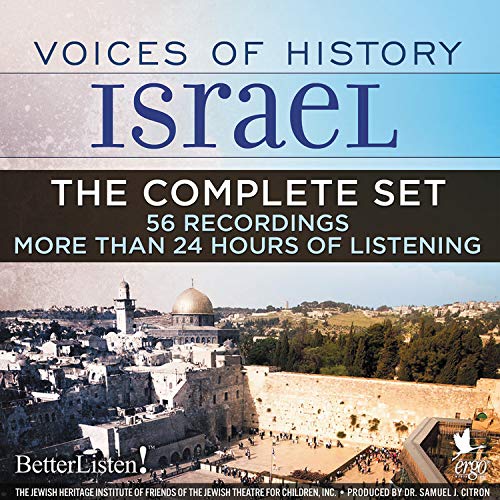 Throughout the 1970s until his untimely death in 1979, writer/educator/dramatist Dr. Samuel J. Citron took it upon himself to interview leading authorities on special topics in contemporary Jewish history, mostly relating to the State of Israel. Over the course of 10 years of painstaking work, he completed the immense task of pulling together personal accounts of many of the more significant events of the last hundred years. The set consists of 58 recordings, more than 22 hours of listening, each one focusing on a different topic of interest.

As fascinating as the subject matter are the interviewees themselves: former Israeli Prime Ministers David Ben Gurion, Golda Meir, and Menachem Begin; Presidents Yitzhak Navon and Ezer Weizman; archeologist Yigael Yadin; and statesman Abba Eban, to name but a few.

Topics are as diverse as the Battle of Jerusalem, the Birth of the State of Israel, the Israeli Air Force, Israel in the International Arena, Masada, and Recollections of the Pioneering Years.

Each program begins with an introduction and a list of suggested subjects for consideration. A unique collection that no home or school should be without.

What listeners say about Voices of History Israel: The Complete Set