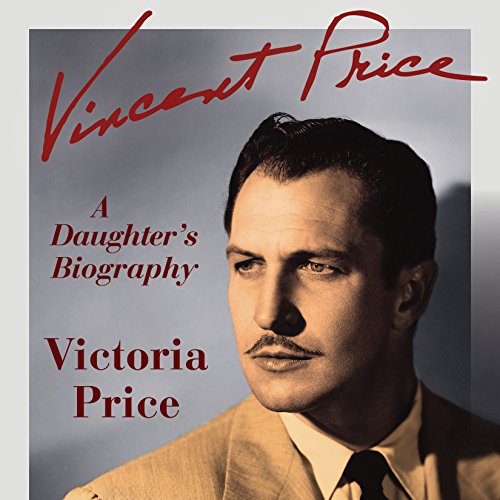 By: Victoria Price
Narrated by: Linda Henning
Try for £0.00

Since his death in 1993, Vincent Price's legacy as a Hollywood legend has only grown in stature. His lengthy and distinguished career - as the voice of The Saint on the radio; as an actor in such unforgettable horror films as House of Wax and The Fly, in classic movies such as Laura and The Song of Bernadette, and on popular TV shows such as Batman and The Brady Bunch; and as a star on the Broadway stage - spanned 65 years. In addition to being an icon of stage and screen, Price was an art historian and collector who did much to popularize the visual arts in the United States, as well as a gourmet chef and author of best-selling cookbooks. Widely revered for his elegance and erudition, this Renaissance man left his mark on many areas of American culture during the twentieth century.

Vincent Price was also a loving father to his daughter Victoria, who was born shortly before he turned 51, at the height of his popularity. Though the star's busy film schedule took him in and out of his young daughter's life, he was always a larger-than-life presence and, simply, her father. The deep bond between father and daughter managed to survive the machinations of Price's third wife, the elegant British actress Coral Browne, who resented the close relationship between Price and his children and grandchildren. After Browne's death, Price and his daughter spent over a year taping conversations that would form the basis of this compelling biography-cum-memoir.

In writing about the father she adored, Victoria Price reveals a man complex, human, and humorous. An actor of range, less than one-third of the movies in which he appeared were in the horror genre. As a pre-war anti-Nazi sympathizer, he was greylisted during the Red Scare of the 1950s until, in a desperate gesture, he signed a secret oath that saved his career.

What listeners say about Vincent Price

Wonderful Biography Of A Great Man

Victoria Price has done a magnificent job with this exhaustive biography of her much loved father. Crammed full of wonderful anecdotes and reminiscences, it really was like getting to know Vincent Price for real. Victoria's love for her father shines throughout the book, but this is far more than just a memoir. Vincent's parents, grandparents, and family members are described in detail, so we get a good idea of what helped to shape the future legend.

This biography doesn't shy away from the more difficult topics; Vincent's pre-war endorsements of fascism in Europe, the massive family upheaval that followed his meeting and falling in love with Coral Browne, and Vincent's ailing health at the end of his long life. Victoria shows commendable fairness and respect to Coral by stating plenty of instances where she is shown in a positive light. I found it very sad to discover that such a talented and acclaimed woman could also be mean, jealous and manipulative. Coral Browne upset a lot of people, and none more than Victoria and her brother.

This book is also full of moments of positivity and joy. Vincent's endless curiosity and thirst for life made him so endearing. Whether it be as a huge film star, a lover of art, chef, or whatever else Vincent did with his life, this is a heart-warming story in so many ways. Reading Victoria's accounts of happy times with her dad really is touching.

This is a biography truly deserving of the man, and Victoria has shown that the family tree continues to blossom!

Vincent Price - loved this actor & his voice
Only knew of Vincent Price in horror movies & as I was young they were very scary to me, but did think he had a marvellous voice.
I was surprised from the book that he did theatre & other is apart from horror.
Good narration

I absolutely loved this book when I read it as a teenager in 2003 and have cherished a digital copy of it for the last 5 years. I always wanted an audio book version and was thrilled to find this. But the narration left me wanting. The narrator has a pleasant voice and her inflections and vocal melody were fine. But she slaughtered the pronunciations of many very well known names, and places (for instance, she called George Cukor, (properly pronounced kyoo-kor) George koo-ker, and called the Champs Élysées (properly pronounced shawmz - ah-lee-zay) the Chahmps eeleez, and repeated these and other pronunciation mistakes over and over throughout the entire book. It was physically painful for me to hear those famous names and places slaughtered like that, and it really took away from my overall enjoyment of the book.
Other than that, I enjoyed the majority of the performance. But this narrator really should consider googling the pronunciations of words and names she is unsure of in future. It would do her some good, I think.

Written by his daughter I was pleased and a bit surprised on the depth of her research and the very candid and insightful story she relayed. A fine biographer
What a interesting man her father was.

I’m an avid Price fan but I’m disappointed by the way this biography is crafted. I’m only four chapters in and am hoping it will get better, but so far I am very bored. Rather than being from Victoria’s own perspective, she speaks of her father’s family history and life experiences either omnisciently or by quoting his own autobiography, “I Like What I Know.” I would probably be able to get into the story more if Victoria herself had narrated this audiobook. But she didn’t. And so without being in her voice nor mostly from her perspective, I can’t give this more than two stars.

What a wonderful expression of love 💓 Victoria Price, put together beautifully, this biography of her father. The narration was excellent and the writing heartfelt. I enjoyed learning more about this remarkable man. Some of the details were a bit much, but it was so well written and narrated, I found myself pulled in to the telling. I think Mr. Price would be pleased. He was such an elegant presence on screen. And that voice. It's, very nice to learn that he was a good man.

I really was scared that 20 some hours was going to be alot to keep my attention but it was great I might have to replay the last 2 chapters as my head phones played a bit while I was away.

The audiobook starts off a little shaky. But after the glowing foreword, it really took off. Vincent Price was a fascinating character.

Only if they are a big fan as I am.

His marriage to Coral Brown was very interesting I hate it that she kind of turned him into a jerk. His life in school, way to much info that no one cares about, really boring part.

When the priest asked Vincent if Coral had any favorite Hymns and Vincent said "Yes, and a few hers also!"

What else would you have wanted to know about Victoria Price’s life?

I think it is all in here to be honest. Right down to what he wore around the house. Again, good book but way to much detail that no one cares about. Just tell me about the man not what he had for lunch.

He was a complicated man who wanted to be liked very much. I think many of us love his work and him but he also had a dark side that I am sure was very hard for his kids to live/deal with and I am sad he could not be a more loving father. It's is also very sad that he let Coral come between his children and himself.

I thoroughly enjoyed every minute of this book. Victoria Price did a top-notch job of research and brought out splendid bits of unknown history for all of us to enjoy. I loved Vincent for his campy and humorous portrayals of villains and his good-looking charm, but now I love him for all those other unique qualities Victoria was able to present to us through her book. Thank you, Victoria Price.