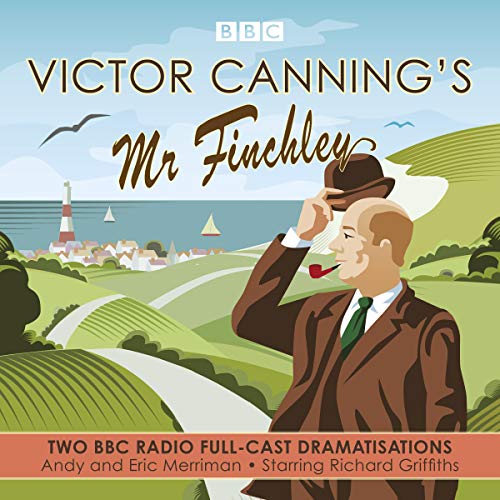 By: Victor Canning
Narrated by: full cast,Richard Griffiths
Try for £0.00

Edgar Finchley is middle-aged, unassuming and not in the habit of taking holidays - but in these two delightful dramatisations, he unexpectedly discovers the delights of travel as he crosses the Channel to the Continent and explores the English countryside.

Mr Finchley Goes to Paris finds our hero on his way to France to track down a rather irresponsible client. But before he sets off, he has an important question to put to a certain widow of his acquaintance.... On arrival in Paris, he has a contretemps with a haddock, gains a guide, makes a move, visits a fair and gets caught up in a kidnapping - but is it a case of mistaken identity?

In Mr Finchley Takes the Road, he falls in love with a canary-coloured caravan and a rather stubborn horse and heads off for a series of adventures touring 1930s Kent. Along the way, he meets an unlikely teller of salty tales, is captured by two gamekeepers and accused of poaching, visits an old haunt and goes on a crusade. But someone is following hot on his trail.

Dramatised by father-and-son team Eric Merriman (Beyond Our Ken) and Andy Merriman, these whimsical stories are narrated by James Villiers and star Richard Griffiths as Mr Finchley.

Adapted by Andy and Eric Merriman

About when life was simple

This is a very easy listen an enjoyable uncomplicated story nothing to deep to tax the brain with, the narrator and indeed the full cast production were very good indeed. I found it thoroughly entertaining.

I enjoyed this a lot It was old fashioned story telling at its best. Thoroughly entertaining.

Loved it from start to finish

This is easily the best audible I have listened to in a long time, a throw back to a gentle stroll through the Kent countryside, but with an edge.
Wish there were more like this that the BBC would bring out, but I won’t hold my breath.
Mr Finchley is from a time gone by, a time that I wish was back in vogue, buy it and you will not be disappointed, I promise.

Harkens back to a gentler time

Well acted and beautifully dramatised, the Mr Finchley books a really brought to life in an entertaining and exciting way.

The books both written and set in the 1930s paint a picture of a life lived at a more sedate pace, where adventure was around every corner and a man could gently trot through the world bumping into friendly and not so friendly souls, safe I'm the knowledge that everything would be ok.

If you want to escape the world for a few hours you won't find a better way than this to do so.

Transports you back to a golden age, accessible only in fiction. What a joy!

Loved this. Took me back to a lovely gentle England. Felt the freedom of the open road before traffic jams and supermarkets. Pure escapism.

I love Victor Canning’s Mr Finchley trilogy in the books.
This dramatisation with Richard Griffiths is an absolute delight. Insights into a world gone by, an England long gone, good old fashioned adventures where nothing, but everything happens in the everyday. A gem!

It’s a relaxing listen, ideal for these troubled times! Narration is perfect, and the characters appealing.

well told drama with some good moments of entertainment

Mr. Finchley's adventures away from home.

This is two separate adventures of what one can only assume is a typical Englishman's adventures away from home. They are done a little tongue in cheek perhaps, but they have a lot of character and are a very easy listen. Sorry though, as there is no shooting, fighting, foul language or sex in it. Not even a hint of one's sexuality preference is mentioned, thank God. Just a simple light comedy and an amusing listen. I only wish that more were made.