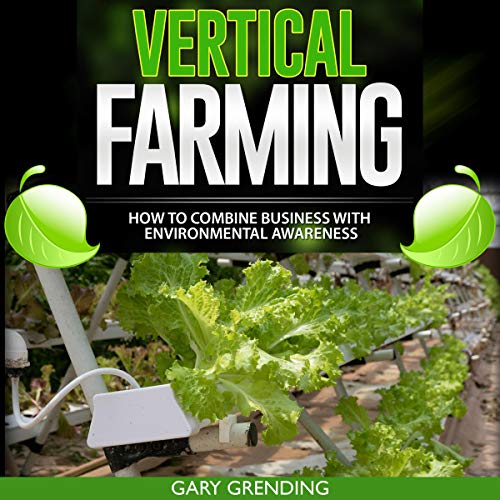 How to Combine Business With Environmental Awareness
By: Gary Grending
Narrated by: Neal Arango
Length: 1 hr and 31 mins
Categories: Non-fiction, Environment
5 out of 5 stars 5.0 (11 ratings)

As the world realizes the benefits of education, more and more people move to cities; in search of a better future. A future which includes affordable housing, health-care, quality education and inexpensive food. However, while the other options are possible, the pressing question here is: If so many people relocate to the cities, who will work on the farms then?

Historically, the farms, built in rural areas, have provided the city-dwellers with cheap food. However, times are changing now. Modern agriculturists believe that cities too can produce ample amounts of food.

In this gripping book, we introduce you to modern agricultural technology, “Vertical Farms.” A state-of-the-art farm, built inside a skyscraper, which grows enough fruits and vegetables to feed the entire town.

This book leads you on an adventure inside a vertical farm; explaining how they can be built inside an abandoned building, and produce enough fresh fruits and vegetables to feed every person in the city. In fact, not just the city dwellers, but vertical farms can actually feed the astronauts who live on the International Space Station, with produce grown on-site.

Small countries like Singapore are already taking advantage of vertical farming. With little land, water, and sunlight, they have managed to produce tons of food for its fast growing population. If the Singaporeans can do it, anyone can do it.

A very short and practical audiobook

Very good information for someone who is new to vertical gardening.If the idea of growing your own food sounds good to you then this book is a good introduction to the subject and will likely give you some good ideas.Vertical Gardening proved to a most interesting audiobook.

I highly recommend Vertical Vegetable Gardening to the beginning gardener.I learned quite a bit on vertical gardening and am planning on implementing some of these ideas to my new apartment.I was very impressed by the information given in this small audiobook.

We will be using some of the ideas to not only grow vegetables in a way that takes less space, but also to create a vertical visual barrier between our back yard and the sidewalk to give us more privacy in a lovely way. The ideas are very adaptable to flowers as well as vegetables.

I would recommend this audiobook

This audiobook is especially informative giving you hints on what to plant first and when. I have referred to it often and always get my questions answered.

I found the ideas and instructions to invaluable

This is really helping me to make the most of my limited space ! I love the quick satisfaction of downloading an audiobook. This is one of the best gardening audiobooks I have listen in a very long time. Gives great information on container gardening and of course vertical gardening.

I am always looking for new garden ideas and this was very intriguing. Lots of great ideas this audiobook.Very helpful audiobook explaining reasons for keeping plants off ground. Gave examples of plants to grow using this method complete with diagrams!

Great ideas in this audiobook. It's helped me already make some good choices for my vegetable garden.This audiobook is full of information on everything you can grow. Very easy to listen and understand, well worth getting

Very good practical information on training your vegetables vertically. You'll be able to grow so much more in the same space.Great ideas for multiple types of vertical gardening arrangements, with detailed explanations and evaluations of each so that you can decide if a particular method is suited to your resources and plants.

I recommend this audiobook for everyone!

I love the way this audiobook is organized and how detailed the descriptions are.It's a great resource for growing plants vertically. Some nice visual aid and lots of information about each individual plant included.

I'm impressed with this Audio guide

This is a marvelous audio book. Thanks Gary Grending for giving this helpful audio book. Lot of tips are given in this audio book to know about Vertical Farming.This audio book information is really great.Highly recommended!!!

This audiobook gives ultimate guide for all

This is a very valuable and useful guide

This is so great audio . This audiobook has excellent instructions and it is easy to understand. If you are want to know about Vertical Farming this audio book is really great, you will be giddy over this audiobook!

This is exactly what I am looking for!

Leaned many effective things from this audiobook.

Thanks to Gary Grending for giving us this helpful audio book. This is highly informative audio book. By listening this audio book one can easily know about Vertical Farming. This audio book is very effective for us. Highly recommended!!!

.An excellent audiobook i ever listen

I really enjoyed this. I've meditated here and there and I was really looking for some clarity. My favorite part is that I learned a new technique that I didn't know.This audiobook is very effective for us.

This audiobook gives a clear understanding

This audiobook is a great listen I finished the entire book in two days I couldn’t put its down. I absolutely recommend it for anyone to purchase this audio book..

I would recommend this guide to anyone.

The author gave me techniques that helped me little by little to regain control of my life.Tips are used in this audio book is great. Thank you for this gift.

It gives us a practical and logical explanation

This audiobook provides a great way of instruction

This is a very important audio book for all classes people. This audio book play a important role in our everyday life. We cannot ignore this role in any way. So we should listen this audiobook.