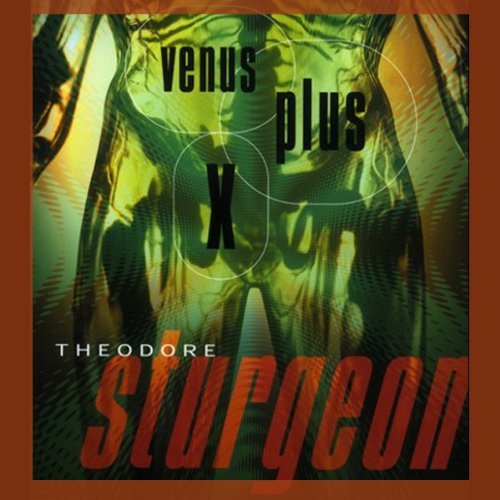 Charlie Johns has been snatched from his home and delivered to the future world of Ledom, where violence is a vague, improbable notion and technology has triumphed over hunger, overpopulation, pollution, and even time and space. But there is a change Charlie finds even more shocking: gender is a thing of the past. This is a civilization in which tensions between male and female and the human preoccupation with sex no longer exist.

Charlie finds that the human precepts he holds dear are profane in this new world. But has Charlie learned all there is to know about this advanced society? And why are the Ledom people so intent on gaining Charlie's approval?

Unsettling, compelling, and no less than visionary, Venus Plus X is Theodore Sturgeon's brilliant, original, and insightful speculation on gender and civilization.

"One of the masters of modern science fiction." (Washington Post Book World)
"The Sturgeon magic does not diminish with the years. His stories have a timeless quality and a universality which is beyond fantasy and science fiction." (Madeleine L'Engle)

What listeners say about Venus Plus X

Great story. Narrator is something quite annoying

This is a great story, the first time I heard about this author, but will come back for more.
It is very well written, the overall theme is current, despite being almost 60 years old, and the style is quite pleasant.
The narrator is very good, except when he is making the children’s voices: very high pitch, loud and annoying, as if he did it on purpose.
Overall, I highly recommend it.

At first I wasn’t into this story at all, but it is definitely worth going to the finish. Like most science fiction, it takes a good hard look at humanity but this one hits some distinct topics that others don’t typically. My 3 star Overall rating is because of the editing. One chapter or scene runs right into another, no pause to kind of switch your brain.
The only thing about the story I don’t like is the “B” story. There’s no conclusion and it makes little sense with the main story. However it does slam one of the major human rights issues.

Charlie Johns has woken up in a strange place called Ledom (that’s “model” spelled backwards) in what appears to be a future where human beings have evolved. These future humans have some really amazing technology, there’s no night, they don’t require sleep, they’ve cured many diseases, and there’s no pollution, poverty, or war.

But what’s most significant is that they’ve abolished gender — humans are now hermaphrodites. Charlie sees men who are pregnant, taking care of babies, and wearing pink bikini underwear. As he lives among these people who have no differentiated gender roles, he considers where he came from and realizes how the little biological detail of sex has had such a powerful affect on human history, society and culture.

If one purpose of science fiction is to speculate about possible futures by anticipating how advances in technology and culture might affect the human experience, you’d have to say that Theodore Sturgeon succeeds with Venus Plus X. And if another purpose of science fiction is to use future possibilities to shed light on the current condition of the human race, Sturgeon succeeds here, too. For while Venus Plus X speculates about what it would be like to live in a genderless society, it’s main purpose is to show us just how much trouble gender and sex have inflicted on us since the very beginning.

Keep in mind that Venus Plus X was published in 1960, so Sturgeon was far ahead of his time when he used a science fiction novel to contemplate sexism, the human obsession with dichotomies, and the American obsession with sex and guilt. Unfortunately, much of this feels like a lecture, especially when Sturgeon hypothesizes about how women became the “inferior” sex (perhaps men selectively bred them for physical weakness, or perhaps men trample women so they have someone to feel superior to, etc.) and what should be the proper understanding of the New Testament teaching on love.

Interspersed with Charlie’s story are little vignettes of 1950’s suburban America that point out many of our particular neuroses about sex and gender. In one of these, for example, a little boy is jealous because his father kisses and tickles his sister when he tucks her into bed but merely shakes the boy’s hand before saying good night. In another vignette, two men are discussing how otherwise sensible women have “blackout” words which make them suddenly get stupid — words such as “differential,” “transmission” and “frequency.” (Yes, I bristled at this.) Other vignettes show us how sex is associated with guilt and sin. Some show us how gender roles are already starting to blur.

Venus Plus X is definitely a novel of ideas, which is both its strength and weakness. I love Sturgeon’s ideas here (considering that this book was published in 1960), but I wish there had been more to the plot. The story takes a back seat to Sturgeon’s radical thoughts and lectures, especially in the first two-thirds of the book. Finally the plot thickens and there’s a twist at the end that had me eagerly rethinking the whole thing. I don’t think Venus Plus X is going to convince anyone that they want to live in a genderless society, and I’m pretty sure that it doesn’t intend to.

David Pringle has included Venus Plus X in his guide Science Fiction: The 100 Best Novels. I don’t know that I agree with him, but that’s simply because I wanted more entertainment. I can’t deny that the book is a classic that dealt with an important sensitive issue well before it was popular to do so (and nine years before LeGuin’s famous genderless The Left Hand of Darkness). I think it’s also telling that Venus Plus X made me think of a couple of my favorite science fiction novels — Slaughterhouse Five and A Canticle for Leibowitz. It’s also a bit reminiscent of several novels by Philip K. Dick. I listened to Blackstone Audio’s version read by one of my favorite narrators, Stefan Rudnicki.

I have to hope this was written when Sturgeon was very young and that he outgrew his ridiculous offense at the idea of the social equality of men and women. Another book of his I've listened to was archaic but this is just stupid and uninteresting. The reader does a good job but the material is unsalvageable.

Am a big science fiction reader. From Jules Verne, the time machine guy (1900ish) via Strange New World to the Bobiverse and Galaxy edge.

But some of the stories ((maybe Heinlein started it) I loved Strange New tho) gets to weird. Like this. Nice ending and main story, but I really don't get what the idea with the short conversationd from wherever/whenever was. To show how gendersuppressions works? I were barely still a teenager when this book came out, but I were aware of stuff like how girls and boys were raised different and women earned less for the same work even then..