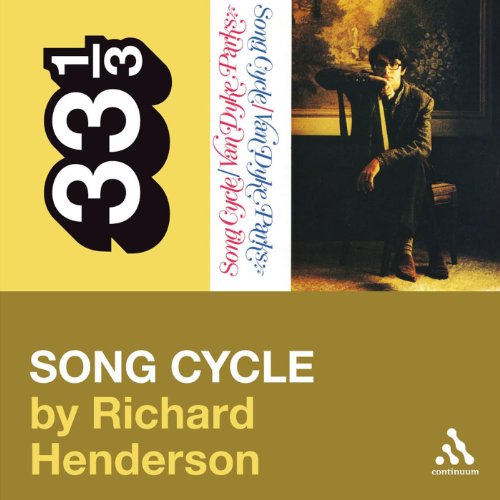 Even though it was a widely acclaimed "Album of the Year" in '66-'67, Van Dyke Parks' Song Cycle lost $35,509 after sales. Engaging with the history, politics, and economics of the times, Richard Henderson digs into Song Cycle's unique place in music history. Of course, he comes at it from a musical perspective as well, exploring the album's innovative combination of pop and classical genres. Fans and foes alike will enjoy Marc Vietor's dramatic reading of this audiobook, and will find themselves, upon finishing the audio, with a wonderfully complete picture of the music and culture of the late '60s, whether they were actually there or not.

Posing more riddles than the average sphinx, with its decipherable answers pointing somewhere dark, Song Cycle was anything but passive. I had already witnessed hippie bands playing with their backs to the hall, so the thought of late '60s musicians being interested in their audience struck me as a concept bordering on revolutionary.

The debut album from songwriter and pianist Van Dyke Parks, Song Cycle first appeared in 1968 on Warner Brothers Records. Its twelve songs led listeners through Joycean wordplay and sound collages to reveal messages of dissent and personal loss, at odds with Parks' buoyant, riotously eclectic music. Monumentally ambitious and equally expensive, Song Cycle resembled a film — possibly Citizen Kane — more than the pop music of its day; like Kane, Parks' masterwork was adored by critics yet all but ignored by paying customers.

In his efforts to plumb the mysteries of this quixotic record and its subsequent fate, Richard Henderson interviews several of the key figures involved with Song Cycle, notably Parks himself and producer Lenny Waronker.

Good Overview of an Oft-overlooked Classic

Very good overview of the album Song Cycle and ultimately the strange career of Van Dyke Parks. This is my second book in the 33 1/3 Series (it far surpasses the other I read on OK Computer), and Richard Henderson's love for the album is infectious and seems genuine.