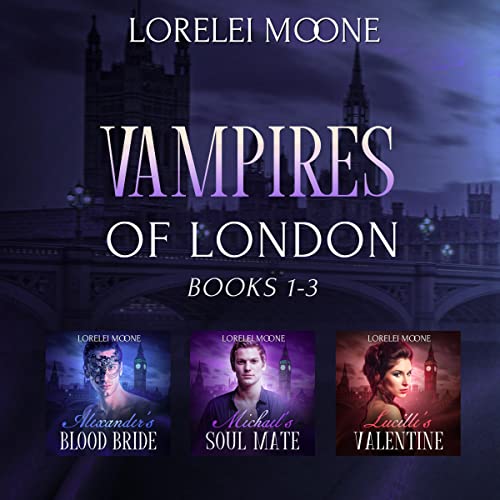 By: Lorelei Moone
Narrated by: Gethyn Edwards
Try for £0.00

Forever is a long time to walk this earth alone, especially when you're immortal.

Vampires are real. Not that they'd want you to know that. In this dark yet sensual collection of present-day gothic romances, follow three such immortals on their perilous quests for love. With each union forbidden in its own way, Alexander, Michael and Lucille must figure out for themselves what's more important: Follow the rules of the Vampire Council or fight for the right to love whoever they want. With dangerous enemies lurking in the shadows, they don't just risk punishment for breaking Vampire law - they might also lose the people they love forever.

This collection contains: Alexander’s Blood Bride, Michael’s Soul Mate and Lucille’s Valentine. Three tales of passion, lust, danger and redemption that will have you turning the pages until the very end.

When Cat ends up at a Halloween party hosted by the mysteriously handsome and super rich Alexander Broderick, the last thing she expects is to become the object of his desire. Although she gets spooked and runs, she doesn’t yet understand the extent of his dangerous secret: Alexander, and a number of his guests, are vampires. And Cat’s blood is unlike anything they’ve tasted before….

Playboy Michael has never wanted to settle down. When he finds a severely injured woman lying in the street, his instincts insist he save her. He turns her into a vampire and takes her home, not realizing that this little random act of compassion is going to change his immortal life forever.

Marek the Soul Eater has escaped and it’s Lucille’s job as Enforcer to return him to the Council. She’s not a team player usually, but when she finds Vampire Hunter Valentino Conti also on Marek’s trail, she decides to join forces. The longer they work together, the more their illicit connection grows. What if the truth comes out? What if Valentino realizes Lucille is the very thing he’s been hunting all his life?

One click today and find out if these three lonely souls are successful in their struggle for love!

What listeners say about Vampires of London: Books 1-3: A Steamy Vampire Romance Collection

Story lines were well written. The most brilliant performance by the narrator. Highly recommended to all who enjoy a vampire themed series.

Alexander's Blood Bride – Shelly has been convinced by her friend to attend the annual Halloween party that is being held by Alexander. From the moment that Alexander sees her he knows she is special, but she becomes nervous and leaves. When Alexander finds out who is he is determined to claim her and protect her from everyone even if that means going against his fellow Vampires.

Michael’s Soul Mate –Anna is a human who is attacked, injured and had her memory wiped clean when she is rescued by Michael who is a vampire. As a result of being rescued by Michael she has now turned but when she finds herself in danger from rogue Vampires will he be able to find her before it is too late?

Lucille’s Valentine – Lucille’s search to hunt down a rogue Vampire has her teaming up with Valentine who is another hunter. The only problem is that if he finds out who she really is rather than being partners she will become his prey. Between their pasts and the secrets surrounding the Vampire they are hunting things are about to get complicated.

I thought the narrator did a great job with not only the characters but with the suspense parts of the story.