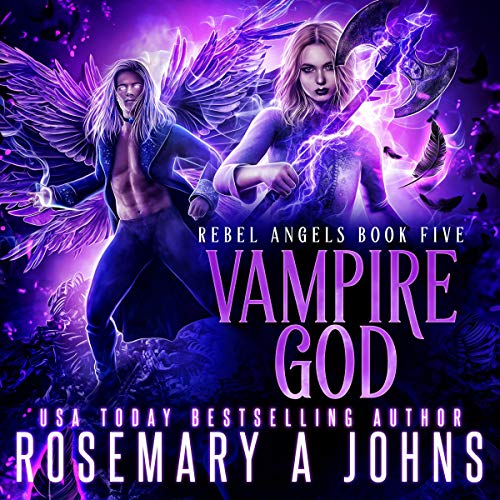 By: Rosemary A. Johns
Narrated by: Rebecca McKernan

In the realm of the gods, the final game for the Crown has begun.

Violet is running out of time. In a court of godly angelic Seraphim, the only way to survive the trickery and secrets of The Burning Temple is to seduce the despotic Emperor’s sultry shifter son. Yet is he as much a prisoner as her in his Gilded Cage?

Violet must undertake the Test by Monster to become a bodyguard to the Emperor: a Fae Knight of the Seraphim. If she fails, her vampire and angel lovers will be tossed into the Abyss. At last, Violet meets her creator, and the dangerous truth is revealed....

When the Emperor threatens to wipe out every world and start a new Eden, time is up. In the final battle, Violet could lose everything.

Fans of Buffy the Vampire Slayer and Lucifer are sure to devour Vampire God, the final book in the addictive series Rebel Angels by USA Today best-selling author Rosemary A. Johns.

Scroll up now and buy now for an action-packed magical ride with irresistible sexy vampire, angel, and shifter lovers, as well as a badass heroine, in this medium-burn reverse harem urban fantasy romance series today!

What listeners say about Vampire God

This book is a brilliant conclusion to a fantastic series.
Violet and her boys make more friends and deadlier enemies. This is an emotional roller coaster listen. this is a great adaptation of a fantastic book. The choice of narrator is perfect. I look forward to reading and listening to more books by Rosemary A Johns

What an amazing finale to this series! Action, intrigue, sexiness, and answers galore! The Narrator did an awesome job on the audiobook! I absolutely loved Violet’s story and cannot wait for more from this author!

WOW!!! What A Book And Series. LOVED It

Vampire God is Book 5 and final in the Rebel Angels series by Rosemary A. Johns. This book is phenomenal (Rosemary out does herself with every book she writes) and it wraps up the series in such an awesomely fantastic way. All the books in this series are outstanding but in my opinion this is the best. Violet and her family must endure a lot. Violet is much more cautious when making decisions that relate to her family. Her upmost desire is to keep them together and safe. This is a fast paced, action packed thrill ride with twists/turns you won't see coming. Once started you are pulled into the story and compelled to keep turning pages to the end and what an ending. This is a must read series. The narrator, as with the rest of the books in this series brings the story to life.

This finale of the series is epic and amazing and OMG I can't believe it! I loved every minute of it!

rosemary has a way with words. im so hookedc on her work vampire god is one more example of her wonderful imagination. the narritor is amazing 5 stars

Violet and her boys are back and this final chapter of their story shows yet again that she will do anything to save her chosen family. She stays wonderfully snarky and refuses to let anything keep her down for long.

Another great book by Rosemary Johns. I love this series!! It grabs you right off the bat and your hooked!!

I loved this series. Fantastic and wonderful audiobook series. I highly recommend this audiobook. Narrator did a fantastic job also.