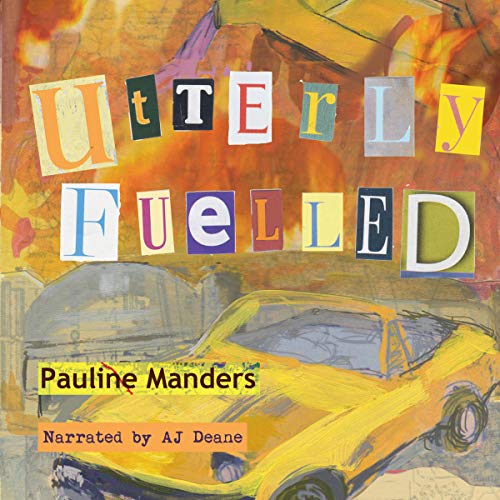 Illegal fuel gangs, murder, stray bullets, and a macabre discovery catapult three apprentice carpenters into action as old scores are settled around them. Throw a Vespa scooter, a canary yellow car, a mysterious medallion, and hints of romance into the mix, and you have another witty tale from Pauline Manders. The heady events culminate in a blazing Guy Fawkes evening.

Once again, Pauline Manders sets her crime novel in the Suffolk countryside, now suffused with the colors and sounds of autumn. The action moves between Bury St. Edmunds and Stowmarket, Woolpit and Hadleigh, Needham Market and Wattisham.

Main characters previously encountered in Utterly Explosive return, and DI Clive Merry becomes established. This is the second book in the Utterly Crime Series, but can be listened to as a stand-alone.

What listeners say about Utterly Fuelled

The Utterly Academy in deepest Suffolk inspires the titles for this series of crime mystery/adventures by Pauline Manders, because the Academy brought together the trio of unlikely friends whose lives we follow in each book. This is the second volume in the series (but the third available in audiobook format), and the characters and relationships are filling out nicely; I found this story the most enjoyable and satisfying so far.
The themes of the book are nicely intertwined and include fuel, from dodgy red diesel and heating oil to piles of bonfire wood, and the hopeful pursuit of romantic partners by all three of the main protagonists. The action moves at a consistent pace which is more of a canter than a gallop, but I feel that it nicely reflects life in this rural world where wood is planed by hand, and a prized scooter carries Matt to work as well as to dramatic crime scenes. But don't go thinking that Matt leads the action - he is more the victim of events stirred up (mostly unwittingly) by his older friend Chrissy, and the more skilled and fortunate Nick. All three are apprentice woodworkers, and their loose association allows the author to introduce a wide variety of scenes and situations, involving, for example, gun safes and innovative beehives.
Why did I particularly enjoy this 'Utterly' audiobook? Everything works well. The narrator now knows his characters, and voices them confidently, the plot builds steadily and convincingly, and the linking of Clive, a senior policeman, to the widowed Chrissy plaits in an strand of officialdom that adds verisimilitude. As usual, the familiar local settings (Bury St Edmunds, Stowmarket, Bildeston etc.) add interest for us East Anglians. This was a great listen and when Book Three appears in audio format, I shall have to download that one too!