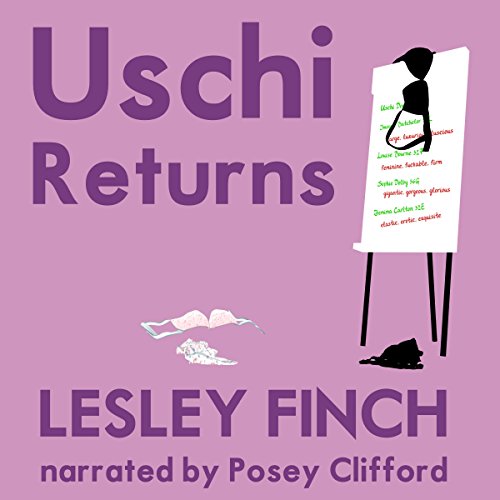 Now managing the customer support line at Tempest Lingerie, Roger Addington's breast fetish is well and truly catered for in a way he could never have dreamed. But when the company's owner puts Roger in charge of improving his female staff's attitudes to their own bodies, there is only one person he can think of to take on as a consultant: Uschi. Before long, she is up to her old schemes and getting Roger into a lot of sexy big-breasted trouble. The sequel to Lesley Finch's novel Uschi takes things much further!

What listeners say about Uschi Returns

In this sequel to the uproarious “Uschi”, we find our hopelessly priapic, big breast obsessed hero, Roger Addington once again winning the giant boob lottery: a new job as “support” staff manager of a oversized bra company call center.

Of course, in typical Finchian fashion, all of Roger’s employees are lovely, young, ludicrously overdeveloped women.   If that wasn’t enough of a premise for button popping, heaving bosom misadventure, not to worry…Finch brings back the unforgettable Uschi to torment, tease, and orchestrate a series of outlandish breast encounters for Roger.

His massive member is taxed to the limit by Uschi and the top heavy team of women. I almost feel sorry for Roger as Finch relentlessly robs him of his precious bodily fluids in one red hot, boob driven scene after another.

Again, I can’t say enough about Posey Clifford’s reading. Absolutely perfect. She made "Uschi" an audiobook experience almost impossible to top, but she is back to prove she can do it again in "Uschi Returns". Her charming, fully committed, tongue in cheek performance brings Finch's ribald tale to life. All her characters are superbly drawn. The perfect combination of comedic tone, unique, well acted character voices, and professional narration.

I simply can’t imagine Uschi sounding any different. The office girls are distinct and memorable, each with a specific British accent. My personal favorite from this story was Nina, the founder and owner of the Bra Company. I loved her. Clifford’s portrayal of Nina was absolutely delicious.

By the way, I believe we first meet Nina in Finch’s first novel, “L.C.T.F” if I’m not mistaken? Anyway, Nina’s accent was so sweet and sexy. Welsh? (as an American, I’m not quite clear on the dialects of the UK)

And while her female characters are done to perfection, I must say that Clifford’s Roger is rock solid. His tortured, groaning, stammering retorts to many episodes of boob overdose never fails to draw out a laugh.

One thing that I wanted more of was some development of the emotional link that holds Roger and Uschi together. There was one episode in “Uschi Returns” which I wasn’t expecting, and I was riveted as Finch began to explore the emotions behind all the naughty boob and boner adventures. But this drama of the heart was usurped by another sexy Finchian crisis of the mammary kind for Roger.

I still rate this novel a solid 5 stars but I would love to see more exploration of emotions. I think the campy British sex romp tone can co-exist with some feelings in the mix. Not wishing for anything cloying. No “I Love You, Roger Addington!” No “And they lived happily ever after” ending. Just a touch of tenderness to round out this crazy, perfect, Uber Boob Universe.